The only way to get to Grand Turk (and arrive on time) is to sail above the Bahama Bank and then downwards. You can go the other way as well, staying in the shelter of the reefs, banks and Cays against the North Atlantic swell, but it is quite a few hours more steaming. But the weather is beautiful today, the sun is shining with a gentle breeze and there is only a very low swelling running from the North East. All under 8 feet and thus the Nieuw Statendam is ploughing through the ocean as steady as a rock. We are looking at a regular and nice 7 day Caribbean vacation cruise.

For those of you who believe in these sorts of things we are sailing in the Bermuda Triangle for the whole period of being at sea between Half Moon Cay and Cockburn Town / Grand Turk. As is usual mystical things and hype are more interesting than cold facts (Remember what is news: Dog bites Man is not news but Man bites Dog is) And thus through the ages this thing about the Bermuda Triangle and large numbers of people, ships and airplanes disappearing here has grown and still pops up on a regular basis.  Lots of ships and planes have disappeared here, but no more than in other comparable areas. 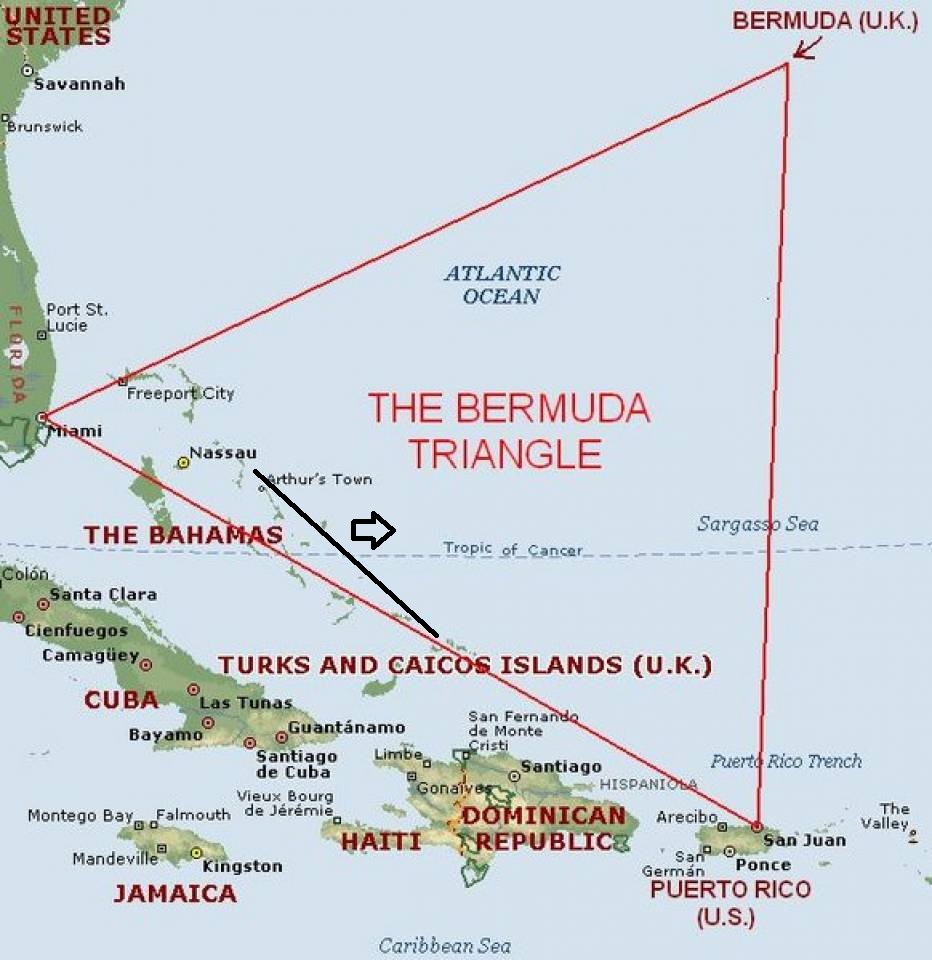 Main reason: this area is also known as Hurricane Alley and that gives (at least) the sailor the immediate answer. A lot of hurricanes go North West coming from the East Caribbean and then later go North East along the edge of the Bahamas. So ships can be unlucky as this is a very busy shipping area. Then storms which travel from the Cape Hatteras area can dip south east and create havoc as well. Then a very heavy Cape Hatteras storm can easily create a wave field of 25 to 30 feet and that can be dangerous for even larger ships.  Thus things have happened here in the past and ships have disappeared.  My question is always to those who bring up the Bermuda Triangle: Well if it exists, why has no cruise ship disappeared here, as this is one of the busiest routes for cruise ships?  Maybe too many witnesses?? 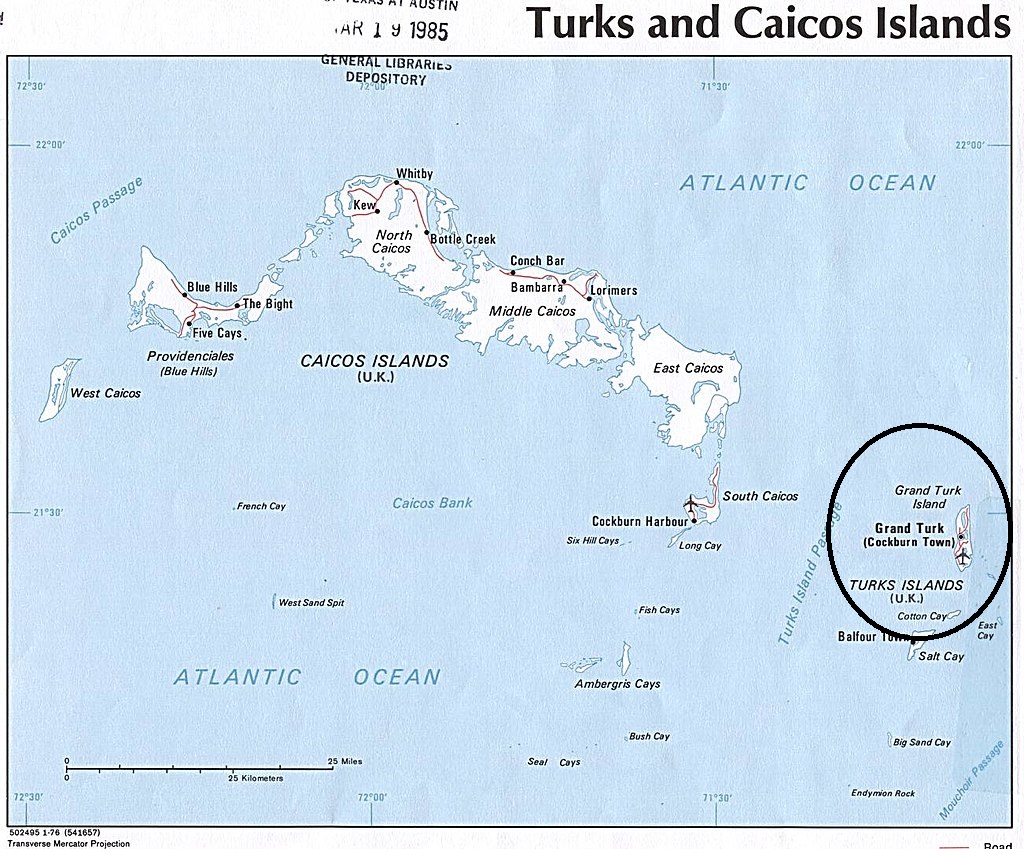 The chart of the Turks and Caicos Islands. We will keep the Caicos islands to the south of us and then come down through the Turks Island Passage and then turning to the East towards the port of Cockburn Town. Plenty of islands but none offer very good landing options. (Chart courtesy: Wikipedia and it looks like they got it from a library as the stamp is still visible at the top)

The Turks and Caicos Islands have always amazed me as I always thought it would make sense that they were part of the Bahamas as they lay in line with them, down from the South East point of the Bahamas Banks. And they are from a topographical point of view. But politically they are separate entities. And Great Britain who had these islands as a possession never combined them with the Bahamas. The inhabitants are still “subject to the British Crown” in a similar way as Barbados and the Bahamas. They have the British Queen as the head of the Commonwealth, represented by a governor but for the rest they run their own show.

The island group or chain comprises of a lot of small islands of which most are uninhabited. And even the larger ones are not so easy to reach. Since the 1950’s cruise ships (mainly small ones) tried to visit the most accessible island, which is Grand Turk but it was always a challenge. Because the island is rising directly up from the depths of the ocean there is hardly and shallow areas and if you wanted to anchor you had to drop the anchor almost onto the beach. And with changing winds and currents that did not give the captains many happy thoughts. Then there is most of the time a swell running which meant that having a stable tender alongside the tender pier was something that gave the Staff Captain very unhappy thoughts.  Before 2006 it was the port that we had to cancel most often, nearly 50% of the time, and thus we kept asking higher management not to put it on the cruise schedule.

That cry of “despair” was heard by Carnival Corporation and they decided to build a cruise ship pier there. A pier that just fits on the shelf between the dry land and the abyss. (They had to dig a bit into the land itself to get the distance. That pier was finished in 2006 and our Noordam was the first official cruise ship calling there. With the pier came a resort to give the guests a nice beach experience and some diversion if too much sand and sun became too much. The small town of Cockburn is not too far away and has some old historical things to view. My suggestion, for whatever you do, when you walk off the pier and through the shop at the entrance, bear to the right. They have a little space museum there. As it was here where they had the Mercury project and where John Glenn plunged into the sea. When I went ashore here last time it was free of charge and very interesting without being nerdy.

Weather for Tomorrow: Mainly sunny 29oC /84oF with a gentle North Easterly Breeze. The breeze will make it very scary on the beach. Sunblock 50 time………