Last week I had to moan and groan about the weather guru’s in the area of St. Thomas who did not have a clue what they were doing but in this area the forecast was spot on. The sun quickly burned all the early morning clouds away and it was a warm and sunny day. Both: Very Warm and Very Sunny. We were the only ship in port today as the dock can take two cruise ships. Even if two mega liners are in and offload 4000 guests each then the resort can take it quite well although it is full then. Today with only 2500 from our Nieuw Statendam there was oodles of space everywhere and even the shuttle bus system to Cock burn town could cope with the traffic.  Cockburn town is about 1.5 miles away and although you can easily walk it, it is not a pleasant walk in the burning sun. I wished all the sun worshipers the very best but I stayed happily inside in the A.C. Most guests only went for a few hours, either in the morning or in the afternoon and long flows of family’s (in various states of “happiness”) came back between 1300 and 1400 hrs. It is going to be mayhem later on at the Dive-Inn, New York Pizza and the Ice cream stand.

The dock is quite a master piece of engineering. As explained yesterday there was really not enough room to even build a dock as the end pylons would need to be about 500 feet long to find support down in the abyss. So the problem was solved by digging into the island shelf. The base of the island is Volcanic as are all the islands here but on top of that is a thick layer of dead coral, the yellow sand that we see. Thus without causing any environmental distress a trench could be dug into the shelf between the islands edge/shore and the abyss and then a bit further into the island. That made it possible to create a dock that can handle about 95% of the cruise ships but some of the very long ones still hang a little bit over. The place they selected for the dock is the only large shallow area of the west side of the island. There is another one, the tender dock to the south about half the space and another one to the north for the local cargo ships also about half the space. On the east side of the island you cannot dock due to ever pounding ocean swell of the North Atlantic and that is the case with all the Caribbean islands. The ports are always on the lee side. Except San Juan but that has an inner harbor.

There is a very sharp drop from the shallow shelf into very very deep water and that caused challenges with constructing a dock. This  buoy indicates how far the ship can drift when coming in. For the Nieuw Statendam that is about 60 feet. Not much with a strong wind.

Thus when a ship arrives, it has to line up carefully because the minute is pushes it’s nose past the area where the coral has been dug away, there is only 60 meters sideways to play with and that is including the width of the ship. Thus it cannot blow /drift to far off course otherwise it will go aground or at least lean against the coral bank. And while leaning against a sandbank is not much of a problem, leaning against a coral bank can be a huge problem, so we do not want to do that. 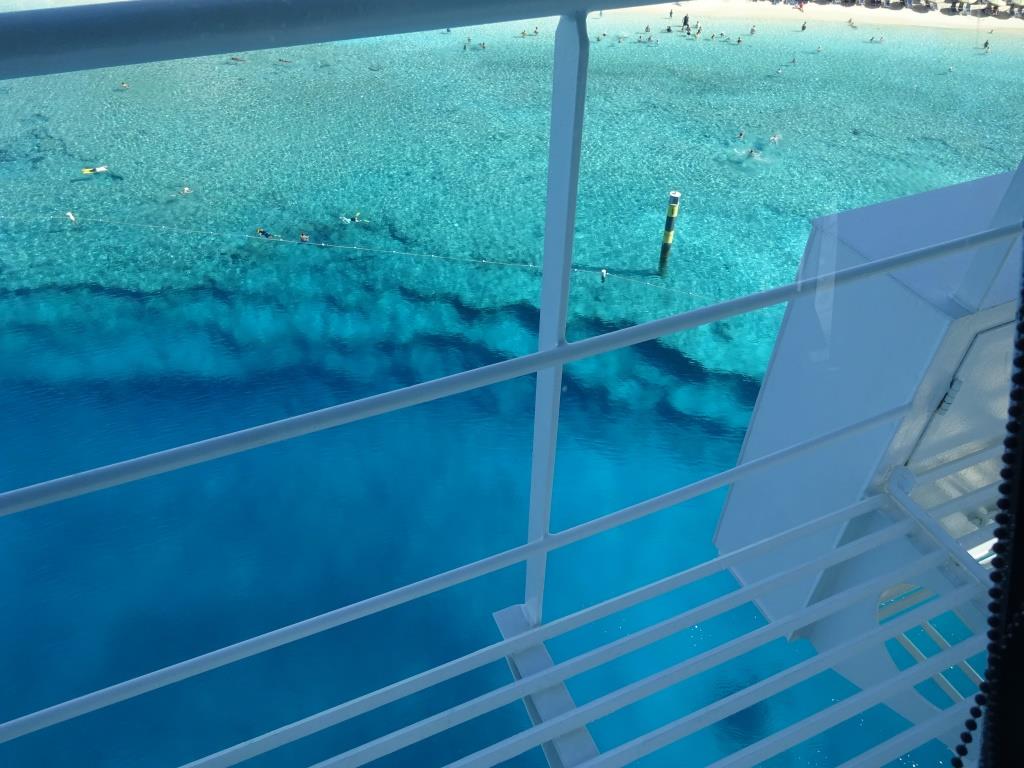 Nasty rims at the edge of the basin. It is very nice for guests as they can snorkel to the edge and then see the bottom / sea floor falling away.

If you are the only ship, you can choose the side that you want and then it is the captain’s preference. Most important here is the wind. The North East Trade wind is most of the time under a 90o angle on the dock. So if it is too strong it either prevents you from lifting off (starboard side alongside) or it pushes you too fast away from the dock towards the coral bank (portside alongside).  Checking the drift away from the dock is often easier than lifting off if you are at the edge of your power and thus, if you get the chance, you dock with an off the dock wind.  All ships dock nose in, so if the drift becomes hard to control you can always go full astern and be in deep water before you have drifted too far. Being at the high side is more difficult as there is the moment that you have to start building up stern way and then you lose some effect on the thrusters that are keeping you off the dock. So while the ship is gathering momentum, the wind will push back and then you might hit the end of the dock. That is also not nice.  Thus the captain has to make a quantified decision of what to do. Today there was not much wind and the captain decided to dock at the high side. If you come from the North, as we did, then it is easier to line up as the Wind will let you drift towards your course line, instead of having to thruster against it. 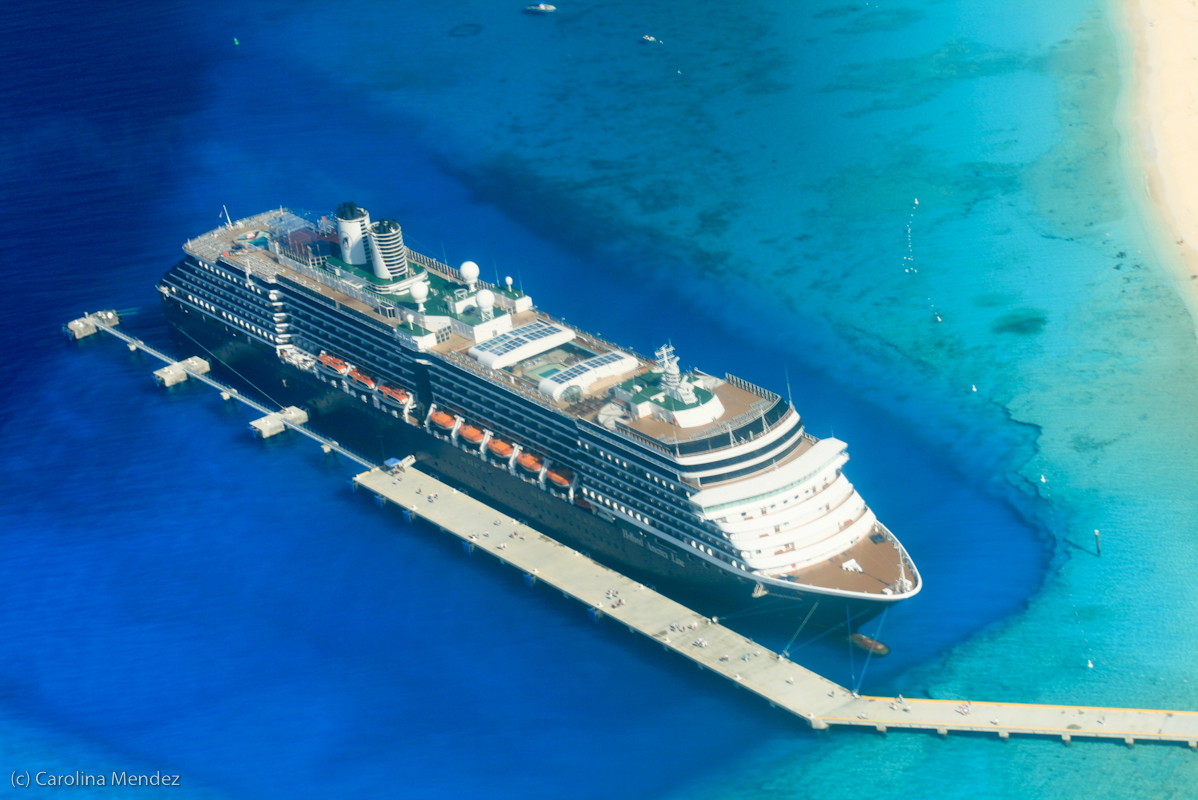 The ms Noordam during the opening of the new pier. As you can see it just fits and there is not much of a margin for error when maneuvering in.

After a sun filled day we are going to Amber Cove in the Dominican Republic. Again a beach resort visit as that is what the Caribbean is all about. And again a port that was developed with help from the large cruise ship company’s.

We will be there a full day and the weather looks good again. Sunny 31oC / 87oF (even warmer than today) and very little wind. Rain is expected for the day after so hopefully the forecast is right. I was lectured today by two little girls, beach experts, that the sand on the beach in Amber Cove was better for digging holes, which they had to do so their mummy and daddy could sit comfortably.  We do not want to disappoint them. Holes are not good when it rains.