Amber Cove has slightly different weather than ports which are at the west side (lee side) of an island and of the Trade Winds.  Amber Cove is located at the North side of the Dominican Republic and is surrounded by mountain ranges on three sides. This means that rain showers which develop overnight in this area and then pull away in the morning due to warming up do not do that here. A rain cloud is just a bit of vapor which expands and contracts. When it expands (surrounding temperature goes up), it can take in more fluid or moisture, when it contracts (surrounding temperature goes down) then it becomes over saturated and will release water until everything is back in balance. So during the night clouds can gather and densify as the vapor gets more concentrated and thus we can often see bands of rains clouds when the sun rises. Later in the day they are then completely gone because the air is warming up and the vapor can spread out.

So when you visit a port such as Grand Turk those vapor clouds expand, release less rain and happily float over the island. That does not work in Amber Cove because of the mountain ranges. Thus in the mornings when the rain clouds start to dissipate and they are on the move under the influence of the trade wind, they bump against the central mountain range of the Dominican Republic. To put it simple, it creates a sort of harmonica effect, as with an accordion whose two sides are being pushed together and everything that is inside the contracting space is squeezed out. Thus more rain coming down than in Grand Turk. How much and for how long depends on a lot of local circumstances. And hence we had the odd shower today. How much and when is almost impossible to predict. The only thing that works to a certain extent is looking at the sky and gamble on how much time you have to get in shelter and can stay on the beach. Luckily the rain is not cold here, so if you go to the beach it does not matter that much anyway, as the sea water is also wet. 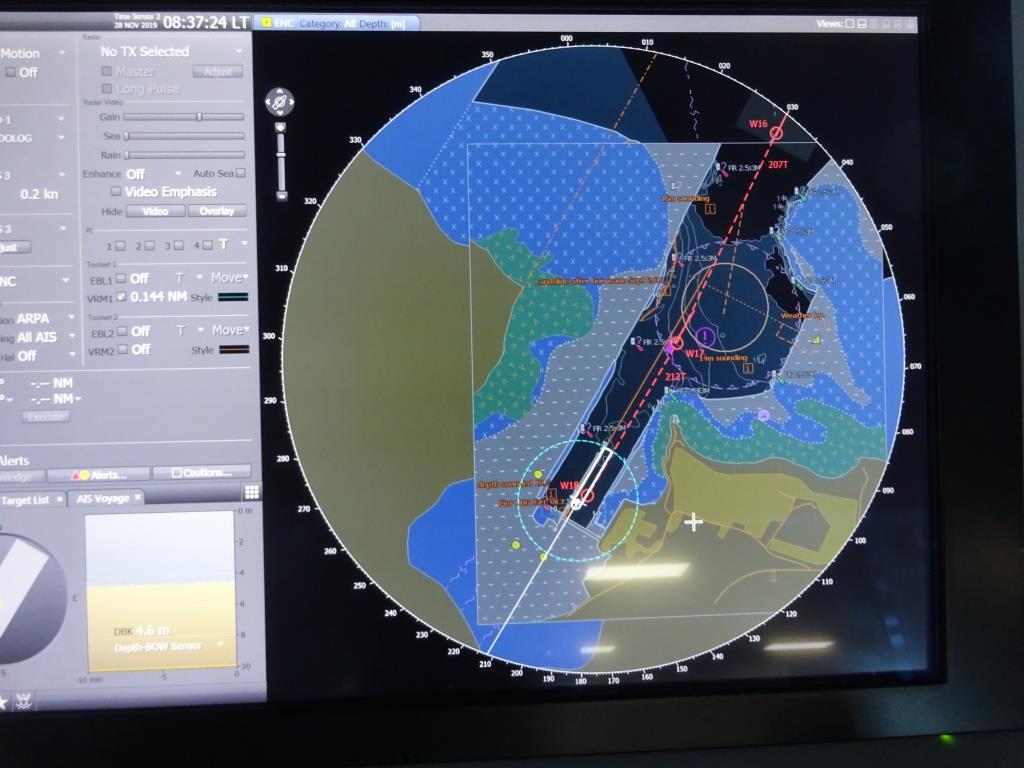 The chart of Amber Cove. You can see where the area was dredged out. There is a turning basin so you do not have to swing in the long running open ocean and be subjected to the ocean swell, but the port is not completely swell free as it is a bit under an angle.

As mentioned yesterday, Amber Cove is also a “fake port” which means that was not there in the past. There was a shallow Laguna and small ships could get in but not the big cruise ships. With Cruise Company sponsorship the Laguna was dredged out and a large dock put in. Large enough when it was put in a few years ago but now it is almost too small as the Nieuw Statendam can just comfortably sit here. So I expect that they will put an extra bollard in for the mega boys if they are planning to come here. Then there is a second pier for small craft, pilot boats, coastal police and ships tenders if needed, when there are more than 2 ships in port. However tendering is not much of an option here as the port, being just open to the North North East, often has a swell running in and that is not good for the tender service. 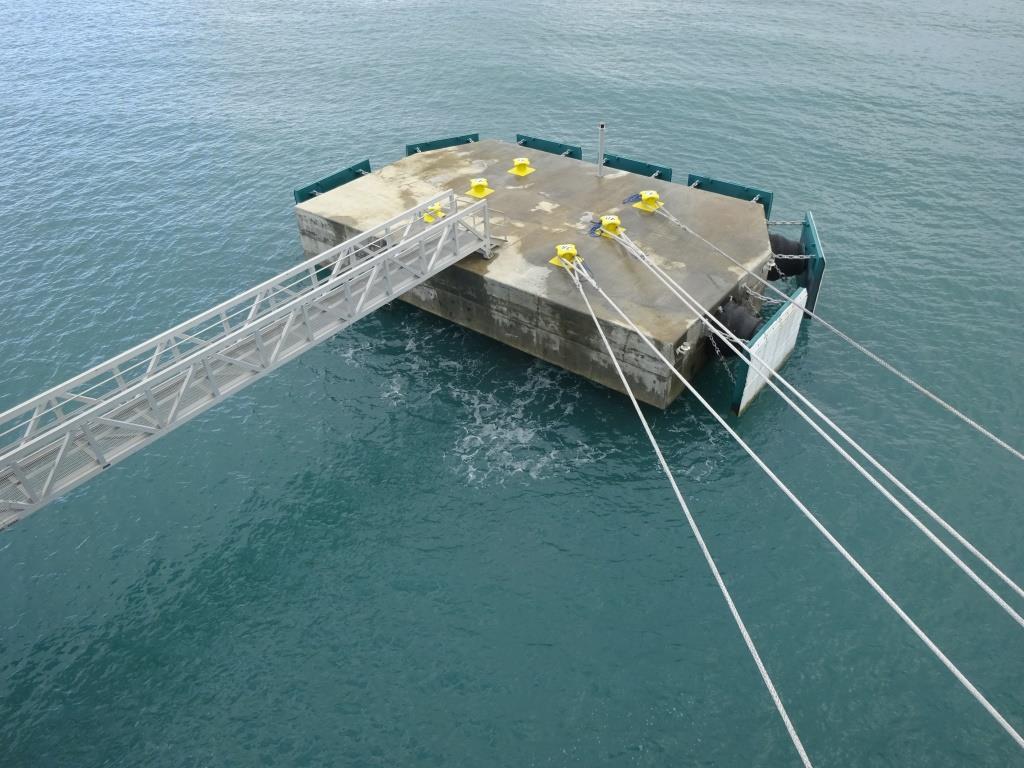 This is the last dolphin about 20 meters behind the ship. Perfect for our docking as the stern lines are under a very nice angle. But if the ship would stick out/ have an overhang/ then it becomes complicated and then you need an additional dolphin. The white foam on the water is created by the waves that are rolling in, hitting the underside of the dolphin and the fenders.

Also today every 20 seconds or so a wave (3 or 4 feet high) came running in and hit the Nieuw Statendam under the ducktail. That is the flat, square bit that we have at the stern. It is a sort of spoiler which increases fuel efficiency. Depending if it hit under or against the ducktail, it sends a shudder through the whole ship. Nothing we can do about that, unless we dock nose out, but that is not so good for the rope configuration to keep the ship alongside. So today we are nose in.

There are more ports which have this phenomenon, Skagway is a very good example, where the wind breezes up in the afternoon and sends a very strong wind through the Lynn Canal. And if you are then docked at Broadway or at the Ore dock you get the same shudder every 20 seconds or so until sunset, when the wind dies down again. Great for Honeymooners; Holland America makes “the earth move” without anybody having to do anything for it.

What is there to do in Amber Cove? There is the beach and a small hotel and shopping resort with an amber museum, a cigar factory and a gondola ride to the top of the mountain. . But because the hinterland is the Dominican Republic there are lots of tours. Coffee experience, Cacao experience, jungle forest with monkeys, tour to the capital Puerto Plata and plenty of snorkel tours. And a nice beach. I have to try to find out if the two girls from yesterday managed to dig the hole their parents needed today.

From Amber Cove we are sailing back to Florida as our next port of call is Key West. We will do this by going north of Cuba through the Old Bahama channel and then bucking the Gulf Stream when we enter the Straits of Florida. This is a run with wind and current in the back until we come to the Straits. So we should have a nice smooth ride, with maybe the occasional shower as Cuba has a high mountain range as well. 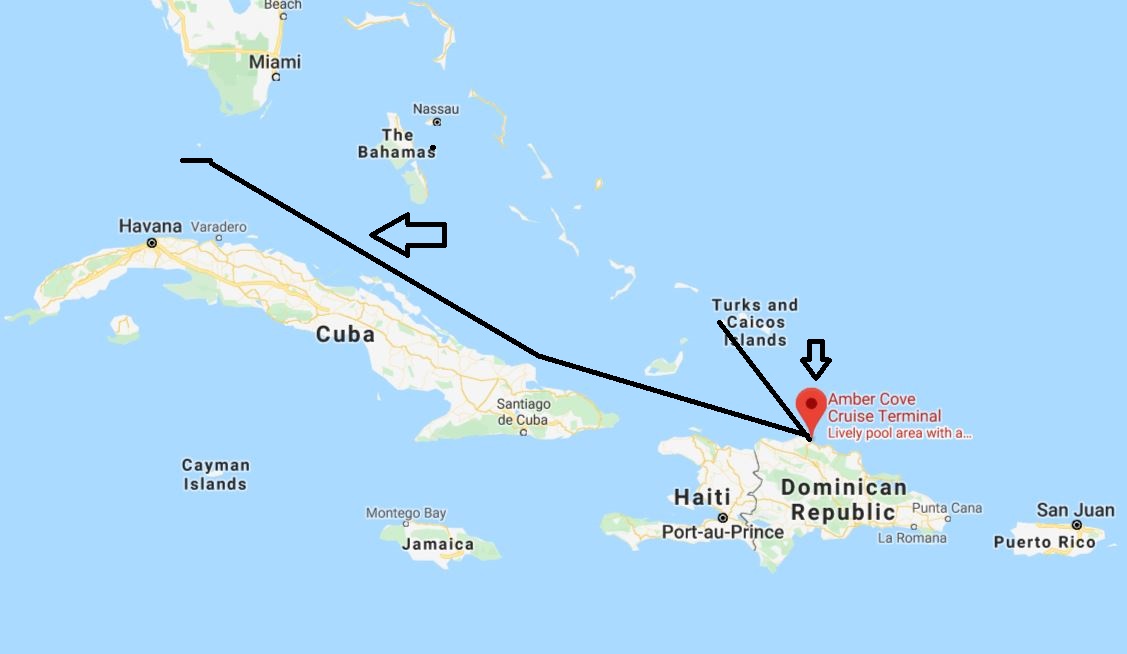 Our route to Key West. A nice sheltered run with the Bahamas to the North and Cuba to the South.