Thus we sailed to day through “Cruise ship alley” or the Old Bahama channel. The water way above Cuba which is taken by the cruise ships from Miami if they go to the East Caribbean.  It is nice and sheltered, being protected by Cuba to the south and the Bahama Banks to the North. Those Bahama banks we did not see today, the reefs, cays and sandbanks are too low to poke above the horizon. We did see Cuba though as it has a high mountain range and we had with sunrise the sun shining straight on it. That works extremely well when we are going the way we are going today. Sailing North West and thus having Sun, Wind and Sea going with us while doing so. The ship was doing about 19 knots on the engine and 20 knots over the ground, courtesy of a 1 knot current behind us. A following current that will become part of the Gulf Stream once the water reaches the Straits of Florida.

We do not need so much on average but we have the challenge that we will have to go against the Gulf Stream once we get to the Straits of Florida which we will be late this evening. So we need a bit of plus in the pocket as we never know exactly how much current we will get against us. Then depending where the Axis of the Gulf Stream is located the captain can decide to hug the Cuban side and cross later, or cross first and hug the American side. That has most of the time the advantage that there is a counter current running South West along the Keys and as every bit helps, we try to find that counter current if possible. As mentioned several times before, dealing with the Gulf Stream is not pure science but a bit of luck sometimes as we still do not really know why and when the Gulf Stream moves from one location to another in the Straits. It is measured by the NOAA every day by means of buoy data and this is what they had to say today:

An area of high pressure will continue to dominate the weather

pattern through the weekend across the Atlantic and Gulf coastal

waters. Seas across the Atlantic will start to increase tonight

as a northeasterly swell builds in. Another cold front will

approach the local waters on Sunday night into Monday. Winds and

seas will increase again during the beginning of next week after

the cold front moves through the region.

Increasing winds and seas into the

This data courtesy of the Naval Oceanographic Office. (Thank you NOAA)

Which means that the Axis is pretty much in the middle for the Key West area we will be sailing through. Thus the counter current should be there and thus we can have the advantage. As you can see the forecast also gives another cold front over the weekend. That means that it will not be cold in Florida as everything is relative when you deal with tropical weather, but it might be rainy and windy when we return to our home port the day after tomorrow,if the front is moving fast. If the front is moving slowly then we will just be gone again when it hits Florida. 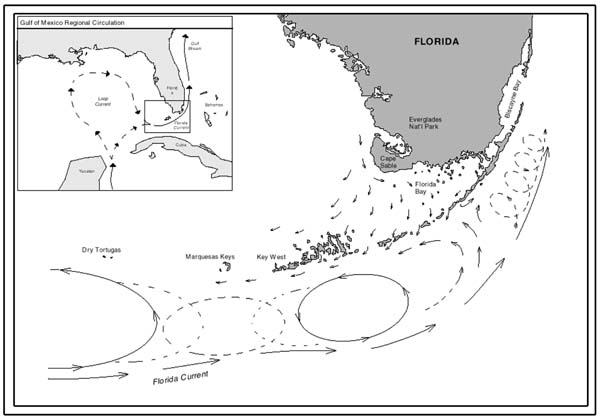 The Gulf Stream and its related turbulence captured in a diagram.  In real life this diagram is sort of correct. The challenge is, we never know exactly know where this donut sits which separates the axis from the counter current.

But first we will have Key West and for that port the weather looks good with a gentle breeze and temperatures around 79oF / 26oC.  Once upon arrival we all will have to see CBP as it is our first American port after going foreign. Thus we cannot just roll ashore but first have to show our face and get a stamp before we can hit the good (and sometimes a bit weird) life of Key West.  I will have to get a tender down as I am conducting tender exams for the sailors, as 24 of them need to have their licenses updated.