Promptly on time the Nieuw Statendam arrived at the Key West Pilot station at 06.30 in the morning. We had an hour back last night, and by 06.30 when the Lido opened, the place as already heaving. So there was great interest in, first in the food and then the sailing in. Quite a few people had forgot to set their clocks back; with one lady complaining why we had to go to “funny time” and then back again to normal time. Well if Caribbean Time is “funny” time then I wonder what she would make of West European time, which is 4 hrs. more “funnier” than Caribbean time, plus that we do not do am. & pm. But run the 24 hrs. Clock. Which the States calls Navy Time. But at least it meant that everybody was up and about for CBP immigration inspection which everybody had to see, including my good self as I am that most complicated of person who is a crew member but travels on a “Guest” visa. So I had to show my face to the CBP officer, to make sure that my face belonged to a passport and that the passport belonged to me.  Once that was done all was well in the world. 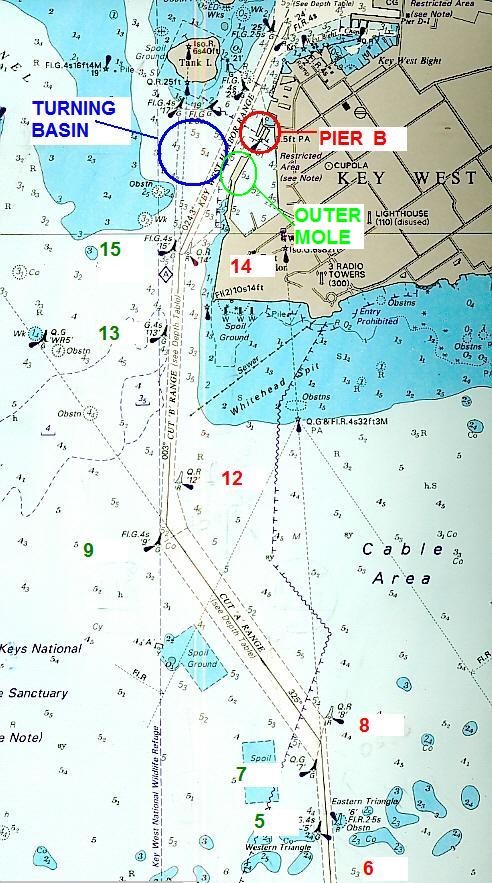 Key West entry channel and docks. you can see the course change to the North West (Cut A Range) and then the change to the north again (Cut B Range) current flows freely over the shallows up to 3 knots at times and the wind blows freely from where ever.  Key West can be a very nasty place.

Key West is a unusual place, ashore but also in the water as there are challenges for the Captain and his team, when coming in. First of all, when approaching, the ship comes out of the Gulf Stream current or the counter current which can run right on top of the Key West sea buoy. Thus the approach course has to counter act that. Once the ship has dealt with that, the local wind and local current becomes of interest. Key West is low, very low and thus it offers very little protection from the wind. Normally that wind blows either East or North East or North West. It seldom blows North to South, the way the channel is laid out. So whatever way the wind is blowing, the ship will drift somewhat in the channel. And the channel is not that wide. Once happily in the approach channel, there comes a turn to the North West and then shortly after a turn to the North again. For this turn the pilot wants to keep up the speed, so the ship does not drift. 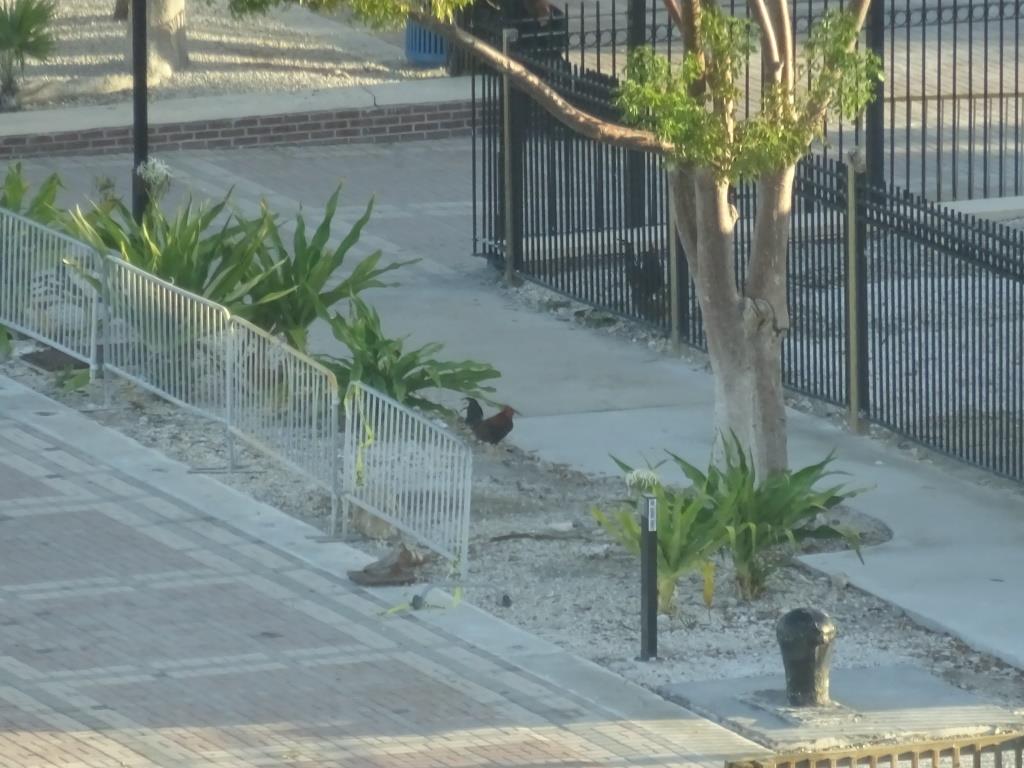 Once alongside Key West is a great place. The chickens think so too. This was Mallory Square at 07.30 in the morning.  Roosters and chickens all over the place. I wonder if this is considered a breach of security as they invaded the cruise ship security parameter.

But once the pilot has made the turn, the captain has to put the brakes on as otherwise you over shoot the berth and that is not a good idea…….. as past Mallory Dock the deep water channel stops and you would run aground. That would make the ship’s captain unhappy, but also the hotels whose view would then be blocked and the locals and tourists who all want to gather on Mallory Square to see the sunset. This sunset thing causes one of the biggest frictions in local politics and splits it all into two camps: those who want to have the cruise ships out because they block the view and those who want the cruise ships in as it helps to sustain the local economy. A pharmacy as the local CVS makes a lot of money from crew members, if we do not want to think about what the guests spend. 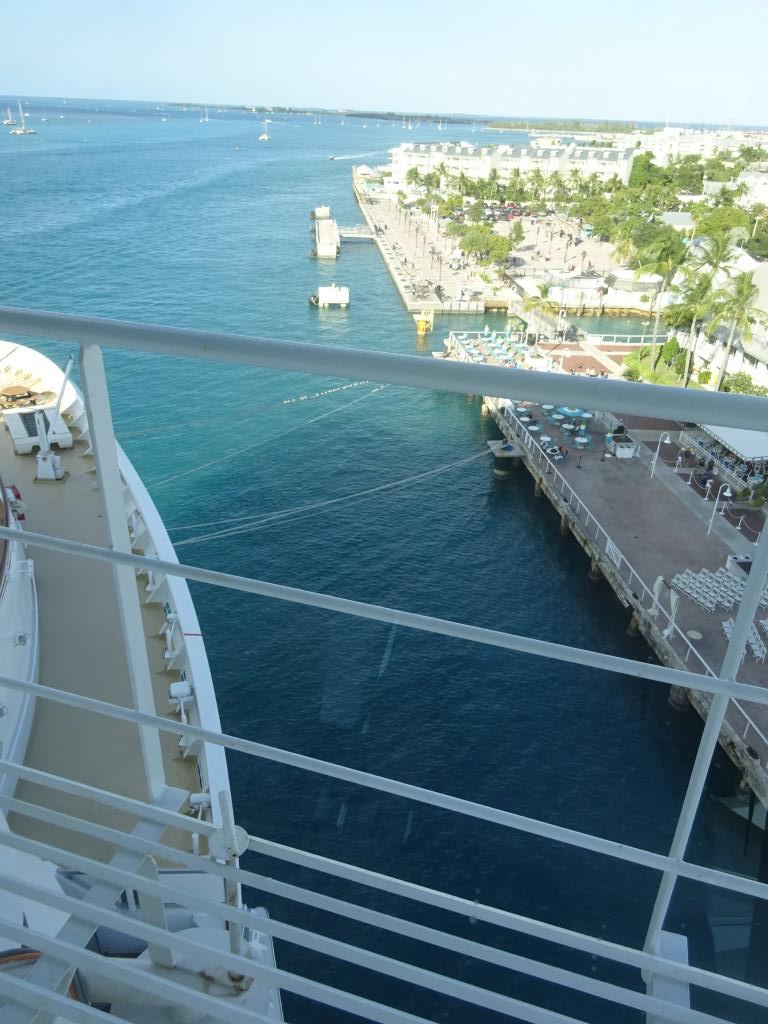 B pier and behind there is Mallory Square.

Today we had two cruise ships in, The Crystal Harmony and our good selves and thus we could make the Mallory Square people happy by leaving that berth empty. Crystal was at the Navy pier which is the farthest out (and uses little motor trains to bring the guests from the ship to the entrance of the dock and back) and we were at the B pier. That is a mixed blessing. B pier is next to Mallory Pier so from the ship you are directly in down town but the dock is really too small even for a Nieuw Statendam size. The stern is always overhanging and is only kept in position with spring lines. That is fine as long as the wind is pushing on the bow. If it moves more to the East then the stern will come off and then you need an Azipod to keep gluing the stern to the pier. That again upsets the local boaters coming by, as they now have to deal with the wash of the Azipod, and most of them do not know how to do that…… (Sunday sailors???) Putting a bollard at the stern will upset the Navy as it will hamper them to get their ships in and out the Navy basin; putting in an extra bollard forward so the ship can move a bit further up, will upset the Hotel as the ship will then obscure more of their view. The B pier belongs to the hotel, or at least the bollards we use, so they get paid for our presence… So whatever we do, we have upset people in Key West. It has been like that since the 1980; s. ever since I have been coming here with the ship.  And if we stay late at night, we sometimes have upset guests as there can be some very “unusual” things coming by here in the port 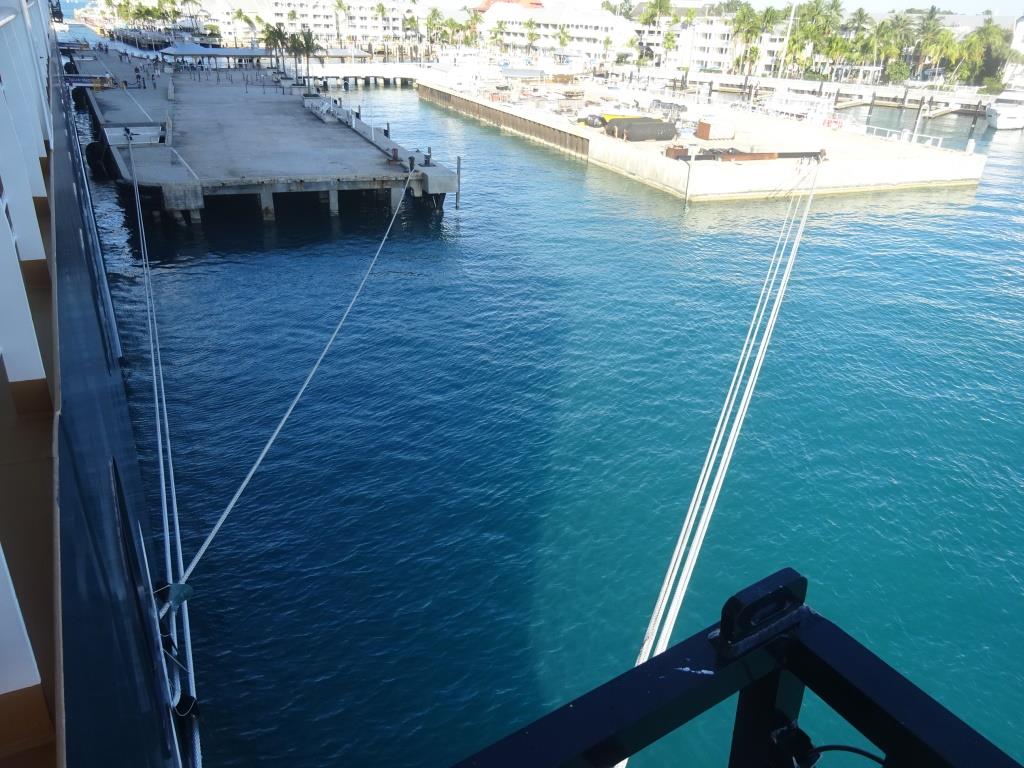 This a view that no sailor really likes to see. Stern lines, breast lines, all leading as spring lines. It only works when the wind is from the right direction.

For us the wind was good, so the ship stayed in position, for the guest the location was good, even the scooters could motor straight into town, and for the shopkeepers it should have been a good day as well as it did not rain and thus our guests (and the 800 of the Crystal Harmony) spent most of the day ashore.

I spent the day in one of the ships tenders as it was Tender Certificate verification day for the sailors and that has to be done by somebody with a Master license. Not an easy port to do this is, there is so much traffic, and so much irregular traffic, that the Driver and his Helper  has to be constant on the lookout to weave in and out of the boats and water scooters, while docking and undocking from the tender platform.

Tomorrow we are in Fort Lauderdale and although we were all cleared today by CBP, we still have to be part of the “zero count” and thus all in-transits, that is including me have to march off the ship, get counted and once the magic “zero” has been achieved, marched back on again.

Weather for Port Everglades / Fort Lauderdale: Partly Cloudy 28oC / 83oF with a gentle breeze. The nasty weather is not expected, as of now, until Monday morning. 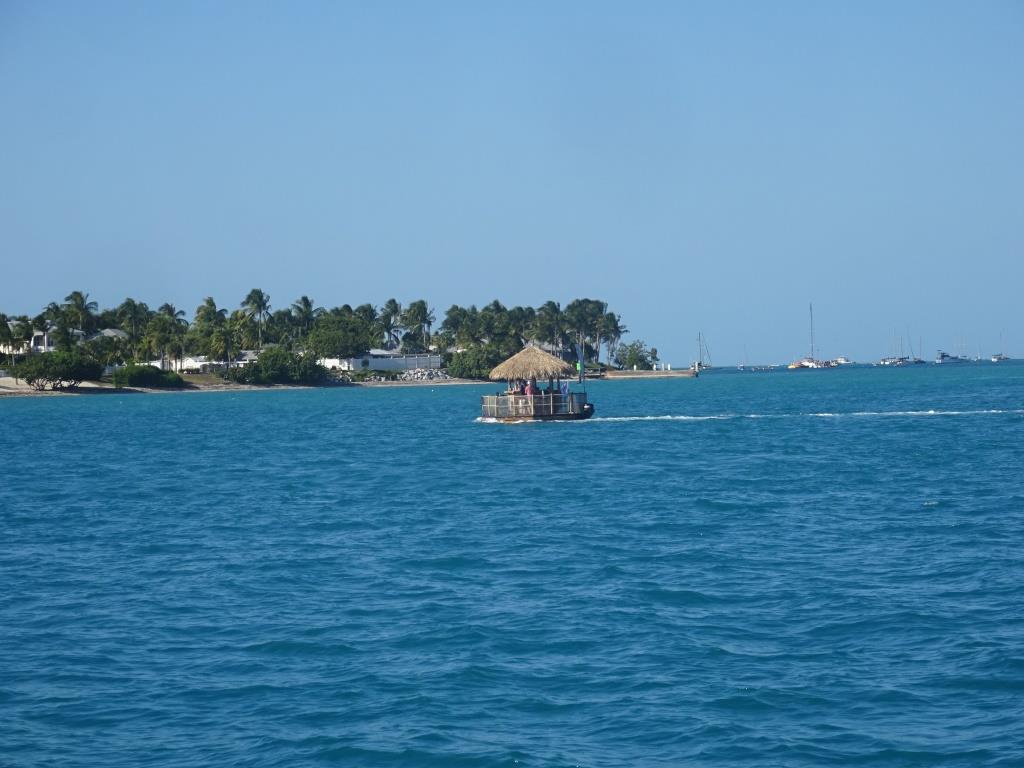 This is a first for me in 40 years at sea. A motorized Tika Tika bar in the middle of the fairway. At times the waves caused by passing traffic were twice as high as the rim of the platform.  And of course no life jacket in sight. They  made a complete loop around the island and then returned. I had my tender crew already prepped for a major lifesaving/ fishing expedition but they made it safely back. There are six pack navigators out there,  these were Rum Punch navigators. Only in Key West.