During the night the Nieuw Statendam was pushed up the coast with a nice – Gulf Stream- in the back  and that brought her on time to Port Everglades pilot station where the ship had to be slotted in with the rest of the cruise ships. The season is now well under way and all the Ft. Lauderdale ships have returned from wherever they spent the summer. With 8 cruise ships all wanting to be in at the same time, it is not possible that the captain just picks his most favorable arrival time. It is now simply dictated by the Harbor Master. And he/she is not looking at which company the ship belongs to, it is just a matter of making the puzzle fit. Some ships will be blocking each other once they are docked and then there are the demands of which way a ship needs to dock for operational reasons. If it is the “wrong way” around, hence swinging on arrival, then the time between ships coming in has to be more than 15 minutes because the center harbor / turning basin is blocked for a longer period.

Today the puzzle was solved as follows: 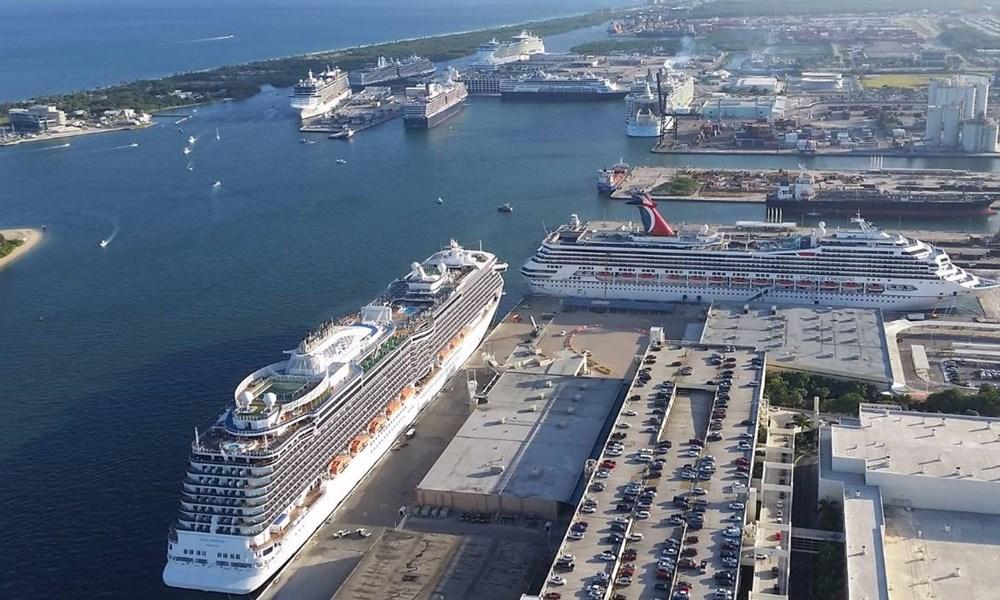 An old photo but it gives an idea about what was in port today. Swap to the two ships in the lower part of the photo around and substitute the Holland America Vista class ship (about to dock at Pier 21) with another Princess ship and you have the whole picture.

As you can see, the moment the ship wants to dock nose out, it has to swing in the basin which takes more time and thus the pilot times go a bit further apart. Then there is the blocking issue. The Eurodam is wedged in between the Allure of the Seas and the Regal Princess and thus she has to dock before the Regal comes in, otherwise she cannot get in between. (It would just go but not easily) Then the Celebrity Edge has to wait until the Adventure of the Seas and the Nieuw Statendam are in as it would be very tight to sail past the Edge if she would dock first at 25; as berth 26 and 29 are further up the Intracoastal Seaway. Then the pilot time between Adventure and Eurodam is more than 15 minutes as the Adventure had to swing first before backing up to 29. On the departure the pecking order can be different but not for the Edge, the Statendam and the Adventure as they have to leave in the same order they came in.

As we were cleared yesterday in Key West by the CBP, I had not expected that I would have to show my face again today; but I almost had to. They still insisted on the zero count here, so my good self and another 93 In Transit guests had to walk off the gangway until the magic 0 was achieved and then we marched straight back on again. We were not seen by the CBP, but they did do the O count print out, which was then carried with great reverence to the waiting CBP Officer. I do not know what they exactly want to achieve with that but we complied with the Rules so we must have made somebody very happy.

It looked like that the Sky Princess had their 6 month USCG inspection as around noon time we saw all her lifeboats in the water, making their obligatory circle in the port before returning home again. As reported in this blog the Koningsdam did it on 13 November when the ship arrived from the crossing.

Her sister ship the Nieuw Amsterdam will depart today for another 7 day cruise to the Caribbean, calling at Grand Turk, San Juan, Charlotte Amalie, Grand Cayman and then back to Ft. Lauderdale. The ship is full to capacity with a lot of younger people on board, some sort of school holiday going on? So the Bar Department will make a killing on Soda Cards this cruise.

Weather: Some change in the weather, as the frontal system falling over South Florida tonight has rained itself out and the chance of precipitation has now been reduced to 30% change on Monday morning 09.00 hrs. The winds up to 25 knots will still come and it will take until Wednesday before tranquility will return to the area. Then it is 4 days to Sunday so with our next call we might just fall in the next 3 day cycle of rain and wind, or just out of it.