As explained last cruise, getting to Grand Turk on time means that we have to go north of the Bahama bank or otherwise arrive about 2 hrs. late. In case of bad weather that might be the only choice but if it would be such bad weather that we had to do that, then that weather would also laying over The Grand Turk and Caicos Islands and then we might as well not bother at all. In that case we would continue to San Juan and we would be able to offer a full day and evening there, instead of an Afternoon arrival as we have on the schedule now. But the weather is really nice, if a bit windy and we are happily on our way.

This morning when we cleared the South West Providence Channel from between the Bahama Islands into the North Atlantic, I could feel the ship move and then stop moving when the stabilizers kicked in. This is something that every experienced Captain = experienced sailor has. We do not wake up with the AC blowing harder or softer, we wake up when it stops (= black out?) We wake up when the ships movement changes and it is not expected (= bridge is changing course…… why) or with any other strange noise that your subconscious cannot categorize into something that relates to the expected situation. 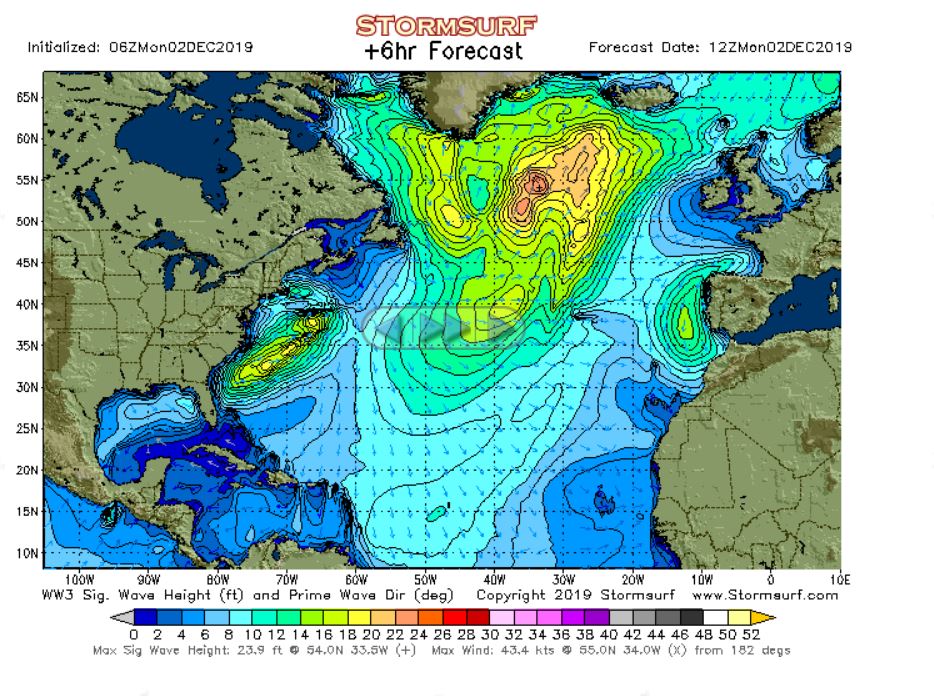 Cape Hatteras at its best. One storm is already visiting Iceland and the next one is just “released from the Factory” and the most southern tip of the attached wave field is just touching our course line.

That little movement when the ship cleared the Bahamas was caused by Cape Hatteras weather again. There the three days cycle of creating nasty frontal systems and storms continues unabated. Cape Hatteras has been very nice lately by sending all the storms directly north East where they end up in Icelandic Waters. And as they have the Midnight Winter at the moment (opposite of the Mid-night Sun) they cannot see those storms anyway so they must ignore them as otherwise you go really nuts. Long Time ago I sailed with a deck officer who had lived for a little while in Reykjavik and later in Nuuk (Greenland) as his father was a civil servant helping out the local Dutch Consuls with procedures. He said the Island was in the winter not so bad, apart from being dark, you just had to ignore it all and continue to live your regular life cycle. You just went to bed in the dark, got up in the dark and worked in the dark. Same as in the summer but then it was more difficult as everybody wanted to be outside 24/7.

These 7 day cruises are a challenge for both the guests and the crew. The guests because they have to cram all the shipboard delights into the 2 sea days that we have and crew because they have to deliver that experience, but also because most of the theoretical trainings that we do , especially for Deck and engine , we have to do on sea days. Once in port maintenance and practical drills become the prime focus and then there is not a quiet moment at all. That is why we would like a 7 seven day cruise to last 10 days and I think most of the guests think the same way.

Today I tackled one of the most difficult trainings that there is out there and the prime reason that I always volunteer to help out and show the Training Officer what you can do to make a training as interesting and interactive as possible. Even if it is boring stuff and there is the acute danger of “Death by Power Point”. This training is called Confined Space Routines for the engine department. E.G what you have to do before you enter a tank to ensure that you come out again alive. People still under-estimate the dangers of Confined or Enclosed Spaces which have not been opened for a while (lack of oxygen) or working in spaces that are connected with pipes to other parts of a building or ship. (Not too long ago two tank cleaners in the New Orleans area died from drowning in a tank as somebody opened a valve and flooded the tank. Cause: not following procedures by ensuring that all pipes have been isolated. We call that Log Out Tag Out or LOTO) 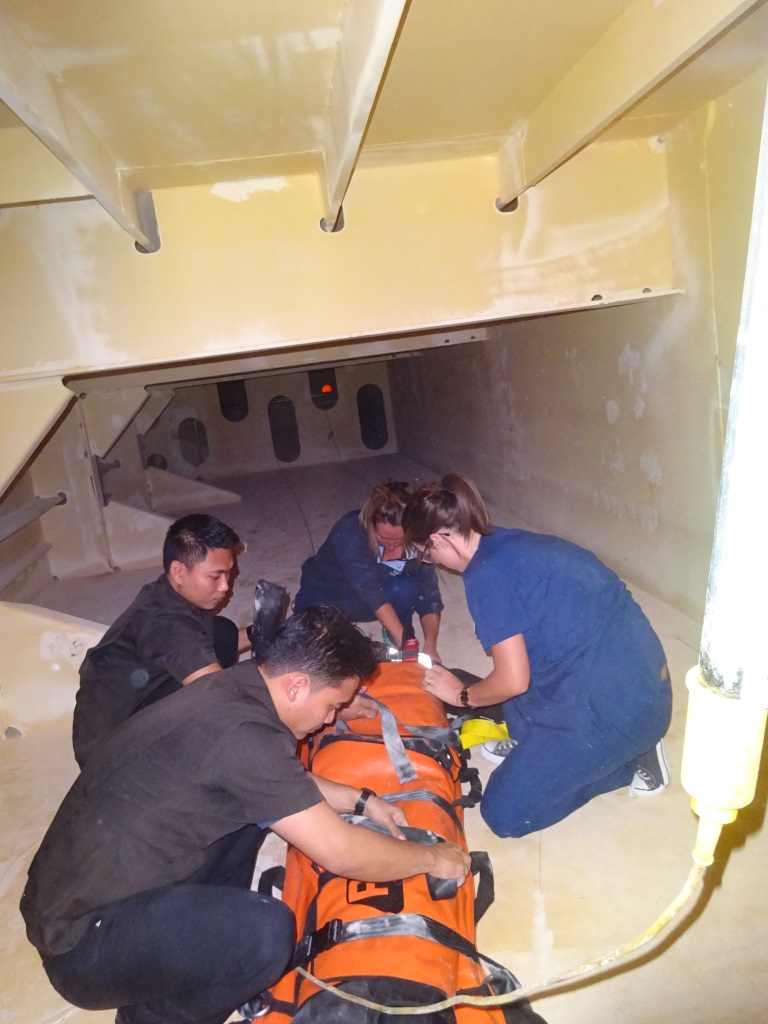 This is a very unusual photo. When something goes wrong Medical will be there. But they are never allowed in a dangerous situation. So they will never see  the inside of a tank. But as this (water) tank had never been used and was fully open to the air circulation of the Engine Room it could done safely for training purposes. So two very excited nurses & part of the stretcher team are here seen busy with strapping Mr. Dummy  onto the stretcher for transport. (We have a special stretcher that will fit through man-hole covers)

The company has very strict procedures of how to go about it when making an Enclosed Space Entry safely, by means of checklists. pre permits, pre entry meetings and checked routines while in the Enclosed Space. We even have a requirement for a post entry meeting so that everybody can review if it went well or that we can learn something for next time. We have however some many procedures, for everything we do, that we cannot remember all the details so we have these regular theoretical refreshers. This time of even more importance as the company had updated some procedures, dealing with the filling out of the Permit covering an entry. Hence all the troops were called in, to focus for 45 minutes on routines that can save lives if you comply or cost lives if you do not follow them.

Tomorrow we are in Grand Turk Seaside Resort just south of Cockburn Town. Weather for tomorrow, Sunny with temperatures of 82oF / 28oC and a gentle breeze. Nasty weather for sunburns so I hope the Cruise Director will alert everybody about sunblock 50, especially as we have lots of kids on board. 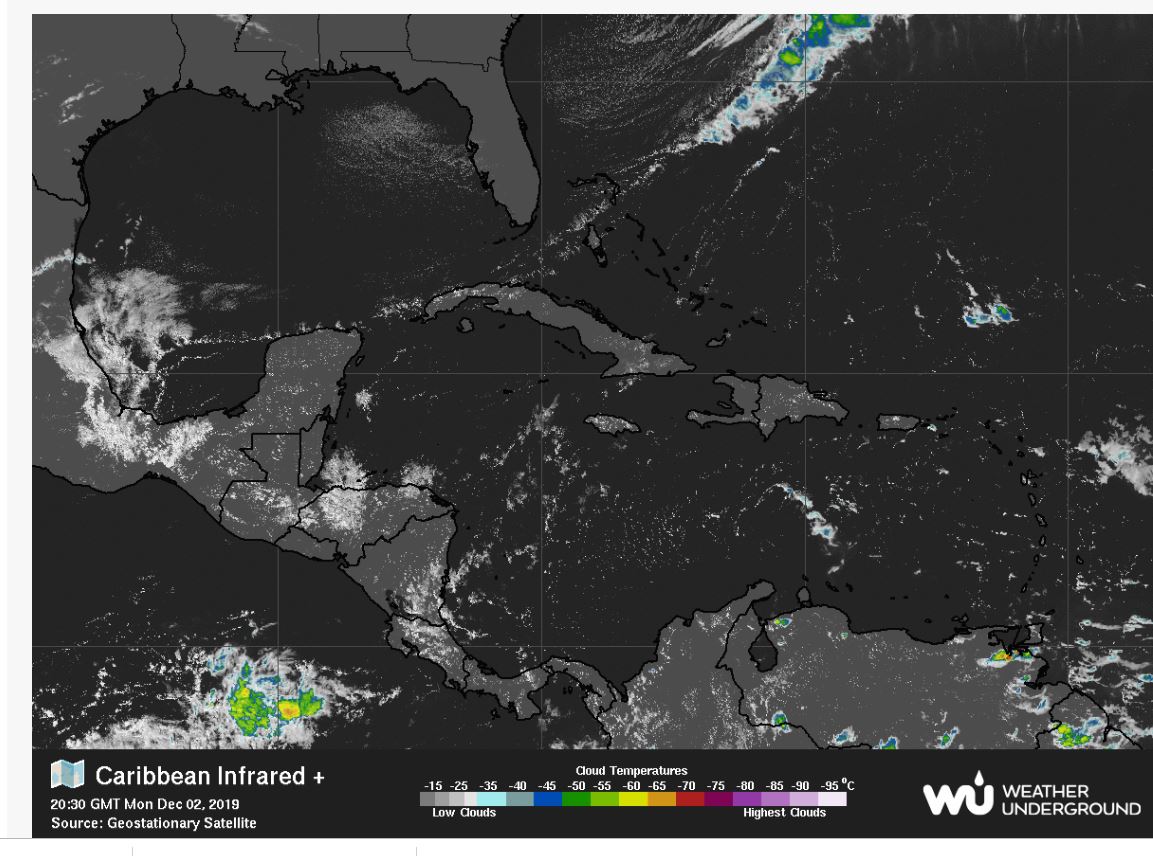 Although the clouds near Puerto Rico look very minimal, during the coming night they will contract and thicken and  will reach saturation point. Then it will becomes a nice band of rain. To the left top of the photo the frontal system going over Florida today, but without rain.

What is going to be of interest for the coming weather:  There is a frontal system coming our way, which will bring rain to San Juan tomorrow and then rain in Grand Turk on Wednesday. (*) The weather on Wednesday in San Juan is forecast to be sunny again, so we will sail through this weather system with the rain during the night after leaving Grand Turk………….. Perfect planning.

(*) It might not be nice if there is a cruise ship in port to have rain, but the locals will be happy. All their water is collected from the roofs and stored in underground cisterns. And as they do not have more than 60 days of rain a year, they will be quite content with a downpour.