Thus today we arrived in Georgetown, Grand Cayman and here we have to anchor or drift. There are only two small docks for the local cargo ships that call here and I doubt if even our Seabourn ships would fit in. But there was a small cargo vessel alongside and thus it was not only cruise ships. There were supposed to be five of us. NCL, RCI, Carnival, MSC and HAL. The first 4 are regular callers and thus they were assigned the 4 anchorages and because we are only coming in once in a while would have to drift further out. For reasons not entirely clear the MSC Armonia cancelled the call and anchorage number four (which is the closest to town) was vacant. Although we are too big to be safely at anchor here, we still had the chance, and used it, to poke the nose as far forward as possible to reduce the tender distance into the port. I think it reduced the tender distance by at least 5 minutes and that is 50% of what it could have been. Grand Cayman has been debating for at least 10 years about putting a cruise ship pier but it gets delayed and delayed so for the time being we stay at anchor or drift around.

Grand Cayman, lives from Banking and Tourism. If you walk in the streets behind the shops, then you see row and row of brass plates indicating banks and other financial institutions who have a mail box in the town and a lawyer’s office who looks after the mail box. Very often there is no physical presence of the bank itself. It is a so called tax haven and GCM does well by it.

Those who do not live from polishing brass plates are mainly involved in the Tourist Industry, either by means of tours or by having a shop. With the arrival of the Mega Liners the shopping has increased enormously as well. The island proclaims that it is Tax Free but I have no idea if this really makes much of a difference on the prices charged. With the arrival of more ships, the little tender port became too small and more docks were needed. That tied in with the fact that Carnival and RCI ships have mostly no tenders on board and thus have to dock or rely on shore side tenders. And thus a whole fleet of GCM shore tenders is now servicing the visiting ships. Holland America ships normally use their own tenders, as smaller but more tenders, often provide a better service, but with the cancellation of the MSC Armonia, her tenders were available, so why not use them for such a short tender distance. The other cruise ships all came in later in the morning and by the time that the invasion from the Carnival Sunshine started, we already had most of our guests ashore and on the beach, on the tours or in the shops. 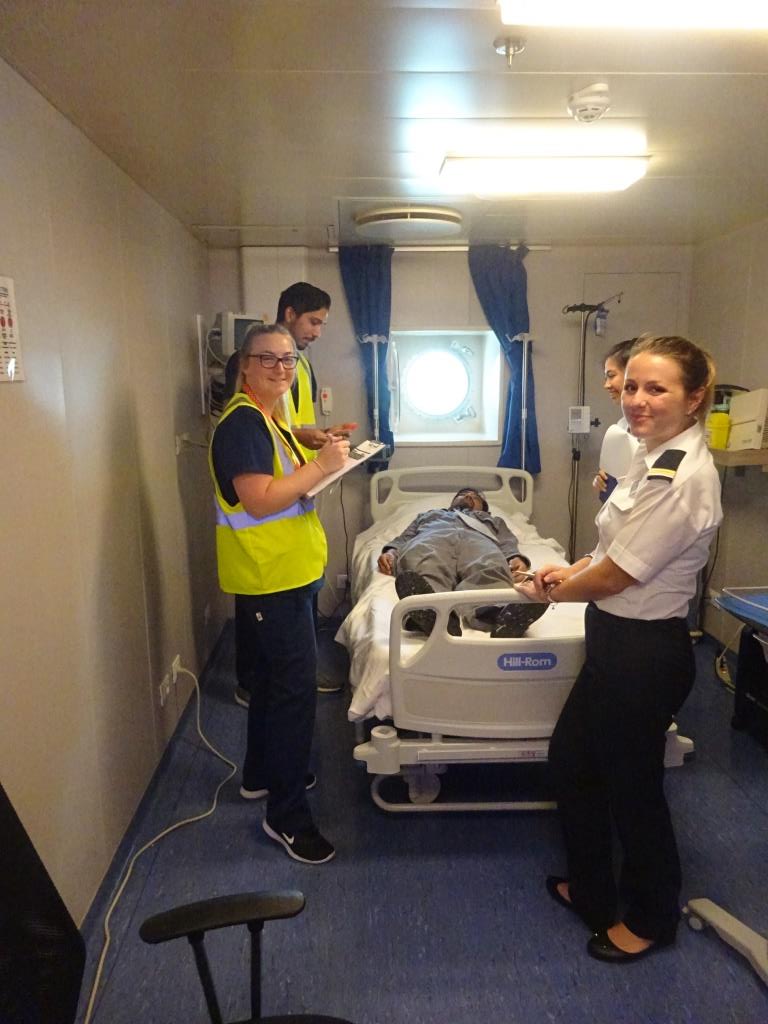 A “red” patient arrived in the Infirmary.  This was a volunteer sailor who was under orders to “be in shock” that he did admirably by refusing to talk or to respond. Giving the Doctor a hard time to make a diagnoses. To the left one of the nurses making the medical notes, and to the right a Lady from the front office who writes down who is brought in, so we can keep track of who was injured.

Because tender service was expected, which means a lot of extra work for Deck and Security, I was not creating any excitement but I had my chance yesterday. A Mass Casualty Drill was due and this a drill with pure mayhem and pandemonium. Our challenge is to control that mayhem so that the objectives are achieved. Mass Casualty means that we simulate an emergency with a larger number of casualties than our Medical Team can reasonably cope with. And still they have. Thus casualties coming out of the disaster area are categorized in Green (very minor), Yellow (Delayed help), Red (urgent, can survive) Black (beyond hope) So I create an emergency (fire, explosion, collision) and put a number of volunteers in the disaster area and the idea is then, that by using Triage Principles, medical saves those lives that still can be saved, after identifying the ones that are on the edge. The Crew loves these sort of things as it is something out of the regular drill routines. 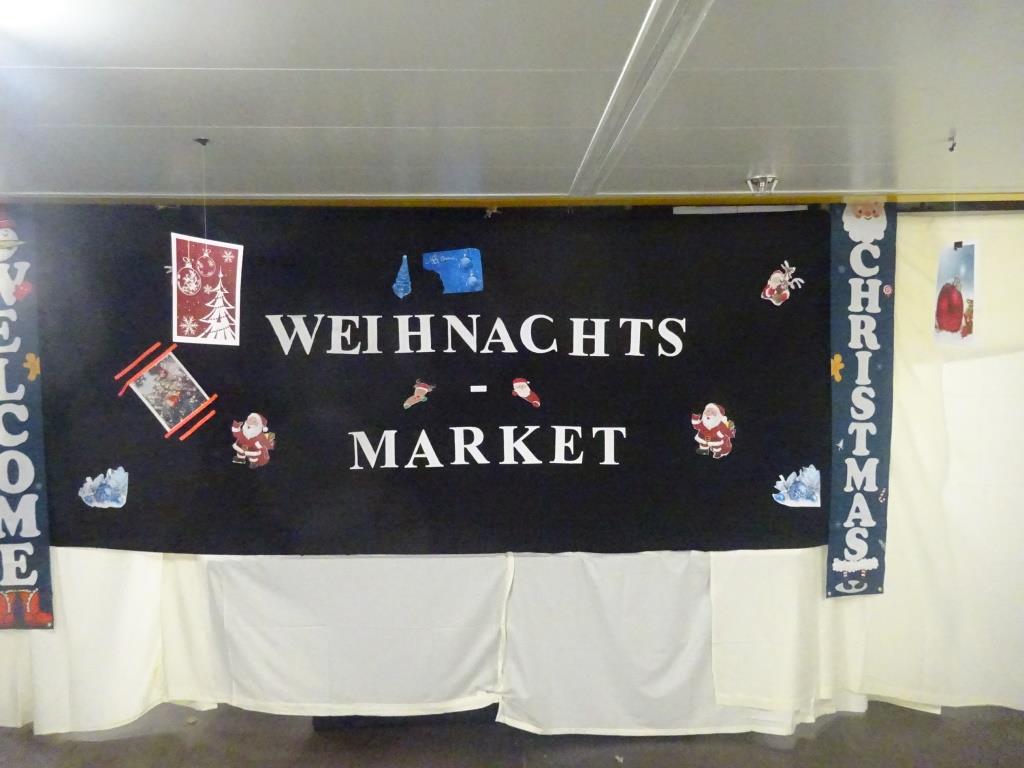 In Europe the Christmas Markets are in the open air around the church, and if possible on snow covered streets; we do it on the lower decks on steel decks surrounded by steel bulkheads.

Guests always want to know how the crew celebrates Christmas while at sea. The answer is we try to join it with what is going on for the guests but it is not easy as it is one of the busiest times of the year, due to all the extra service that we offer. Thus the crew festivities are somewhat staggered and start early. As soon as the Christmas trees are up in the ship, it is Christmas and activities below decks proceed accordingly. So last night the Marshaling Area (there were we load provisions and luggage) was turned intoa  Christmas Market with food and fun & games. We cannot hold a party without food and it is amazing how much the officers and crew can stash away in a short period. With the long daily hours and the workload, metabolism is high. Indonesians do not drink, so they compensate with (a lot) extra food. 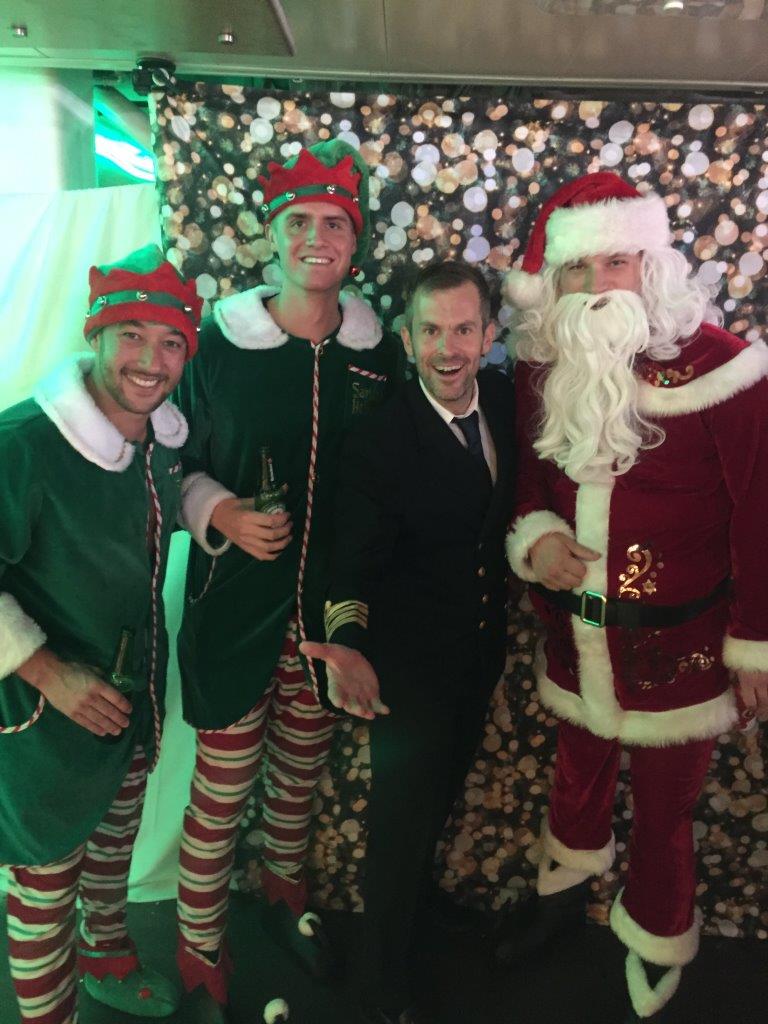 It came complete with a Christmas Grotto Santa Claus and Elves. All three dressed up are cadets, who have since a long time learned that being a cadet on a cruise ship means that you “get volunteered” for a lot of strange stuff. (Photo Courtesy Staff Captain Andrew Barker, that is the man in the middle)

Tomorrow we are in Cozumel. One of the 7 day cruise ship hot spots. Tomorrow it will not be as busy as there are only 4 ships scheduled. Unless more show up. Harmony of the Seas, Liberty of the Seas, Carnival Glory and us. We are expected around 10.am. and we cannot be much earlier as it is a tight schedule from Grand Cayman. Weather partly cloudy 84oF / 29oC and a gentle breeze. That could be possible as it seems that most of the wind blew itself out today as we had the wind peaking to 30 knots at times; and that is breezy even for Grand Cayman.