Cozumel is a favourite port for the 7 day Mass market ships and thus we had The Carnival Glory, The Liberty of the Seas and the Anthem of the Seas in port today. (I think this is at the moment the largest cruise ship in the world) This as the port fits right in the triangle, Miami, Grand Cayman and Labadee /Haiti (for RCI). We call here as it gives another port when we alternate our cruises. But it is hard to get here for an early morning arrival and hence we docked at 11 am. Ships that go the other way, normally spend a day at sea while sailing towards  Grand Cayman or  have a late morning arrival there in the same way as in Cozumel.  Most ships stay in Cozumel until 23.00 hrs.  Holland America tries as a standard to have one evening call in port during a cruise but that does not always work out, if there is nothing to do in the port after 18.00 hrs. Cozumel is blessed with an exciting night life as long as you think in the terms of Carlos & Charlie’s, Senor Frogs and you want to brush up on your Conga Line Dancing. Which is normally not a problem after consuming a bucket of beer, or one of their special Margaritas

Cozumel Island is laying off the East coast of Mexico and could have been connected (and maybe it was long time ago) to the main land if it were not for the Gulf Stream; at least the start of it. There is a current running along the southern part of the Caribbean to the West and then it curves up along the coast towards the Straits of Florida. At Cozumel it comes for the first time in an area where the land is pushing the water flow in. Physics tells us that you cannot compress water, so if you make the flow-through area smaller, then the flow velocity will increase. Thus by the time that the water pushes past Cozumel it is running at a rate of 3 to 4 knots. Not nice if you have to sail against it but wonderful if you sail with it. 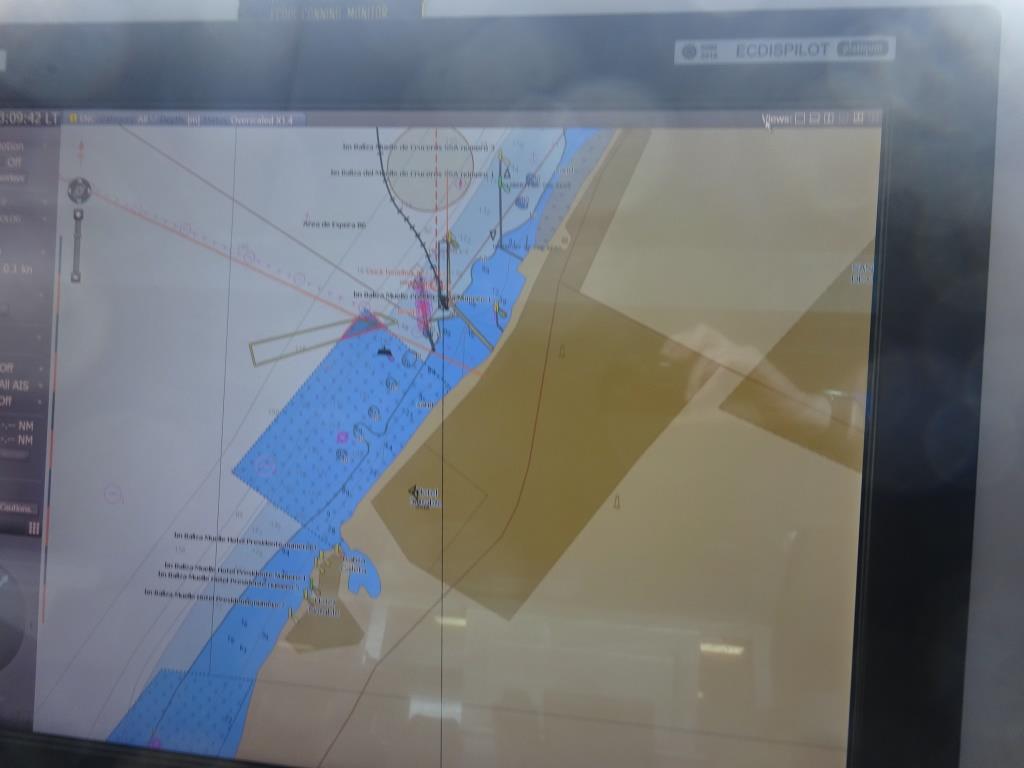 Our approach to the dock. You can clearly see how the current is pushing the ship to the land. By finding the right balance and just enough speed ahead you easily slip into the dock.

When we approach Cozumel we go against the current, until almost at the dock. So if you would prefer to approach with 2 knots, you now have to do it with 6 knots and then start reducing the moment the current starts to lessen. You cannot just charge in with six knots into the docking area and thus you need to know when the current influence gets less. For that we have the pilot, who when leaving the port studies the flow and see’s where it increases and decreases. That is about the only function he has, as the rest is just one straight course to the dock by using the current to drift in under the right angle. Because of the way the current flows, a lot of ships prefer to dock nose out, especially if you come from the south as you simply drift along the pier and stop on time and get out of the current. If you dock inside the pier, then you do the same and once the officer aft advises that the stern is clear of the dock, you go astern. Once you are in the process of backing up, going astern, you also loose the current and then there is only the wind to worry about.

The weather forecast was right today, sunny skies and only a gentle breeze and thus docking was not that complicated. We docked nose in as the schedule was tight and swinging around on the current would have taken another 20 minutes. And we want the guests ashore to explore the dynamic sights of Cozumel such as Diamonds International. But you can also do that in the evening as the shops do not close until the last ship leaves. 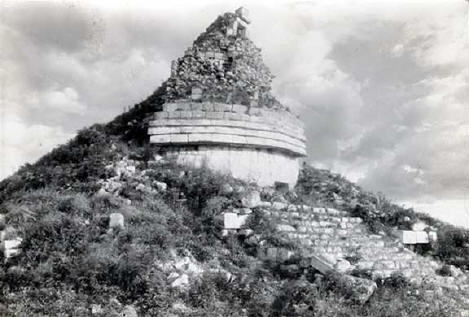 The Cichen Itza Observatory before they dug it out and the restored it somewhat. When I was there you were still allowed to climb up to the top, but I think they have stopped that.

As here is a prime chance to do sightseeing in relation to the Mayan Culture. 8 and 9 hrs. tours to Cichen Itza, Tulum and Coba on the main island. I did the “Chicken and Pizza” tour (I was traveling with some really well educated people)a  long time ago by bus. First it is a 20 minute ferry to the mainland at Playa del Carmen and then a 2+ hour bus ride to the ruins. Therefore there is also a airplane option but that was not possible to do on a poor navigator’s budget. Thus I bounced for 2 hours on the bus one way, and then 2 hours on the bus the other way. I have been informed that the bouncing bit is over as they used the Tourist Money to pave the roads. These long tours are also another reason we stay until late in the evening. Hopefully those who went for Mayan Culture will come back happy tonight and I think that those who come back from Senior Frogs tonight will be happy anyway so we should sail with a ship full of happy people when we leave Cozumel.

Cozumel is our last port and thus we head north towards Florida. The captain will keep the ship in the middle of the Gulf stream and thus Mother Nature will provide 3 to 4 knots of free current. Maybe all the way to Ft. Lauderdale.

Weather for the last Sea day: Warm and Sunny with a Gentle Breeze. A very nice way to end to what has been a very good cruise. 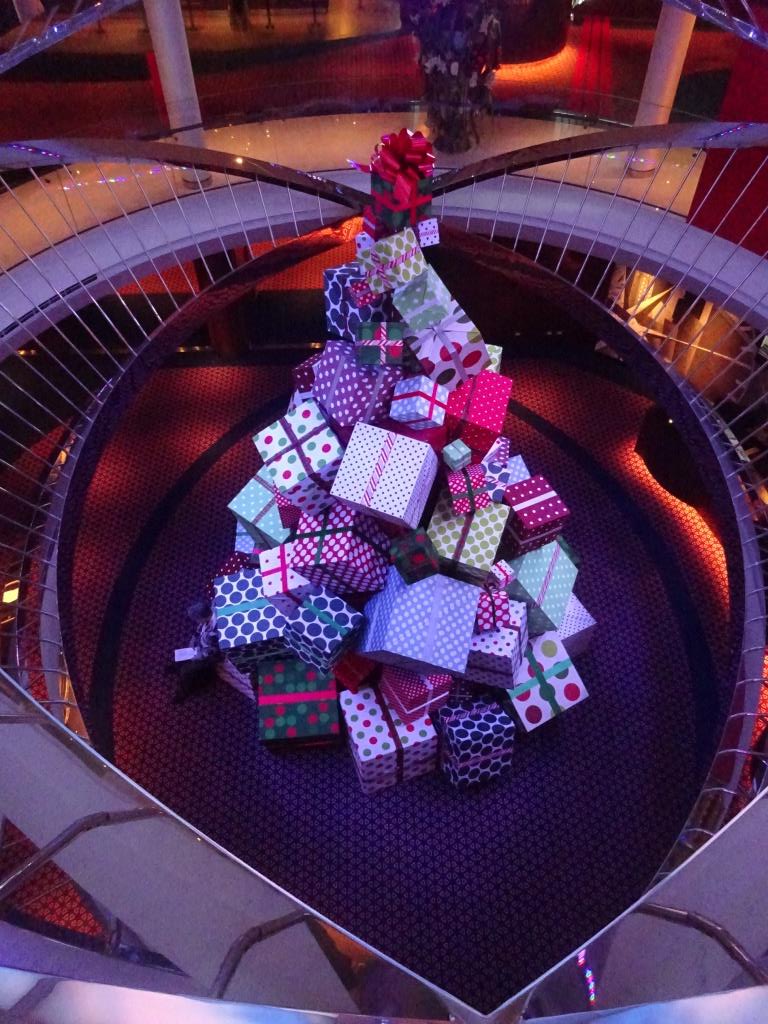 Another Christmas picture. Our “Box ” Christmas tree in the Atrium. Constructed around the Central Sculpture here. Last year some enterprising young guests found out, to their great disappointment ,that the boxes were empty when they tried to open one. Luckily the all seeing security were on site very quickly to prevent damage and the attempt to climb to the top.