And thus we docked at Falmouth Jamaica. Mickey Mouse was sitting next to us, by means of the Disney Fantasy and we had the other dock. Normally all ships dock here nose out, to have the pointy bit towards the open waters as that is normally the best escape possible. But that logic does not always work for an Azipod ship which has much more power in the stern then in the bow. Based on the weather forecast the captain opted for nose in. In case the wind went beyond what the Weather Forecast predicted then we could still  leave as the strong Azipods would hold up in the wind and then use the bow thrusters for steering. This would make it possible to leave while the Disney Fantasy would have to stay in port. Unless that ship can make speed very quickly so she would not be affected by the drift of the wind. But that is something I do not know as I have never sailed on her.

As a result we had an occasional shiver going through the ship during the day, caused by the in rolling swell, which was hitting the New Statendam under the duckfoot at the stern. But that is a small price to pay as the alternative is not being on time in Grand Cayman, where we are tomorrow. Five ships are scheduled to be in so we do not want to be late. You never know if the shops will sell out with so many guests ashore. 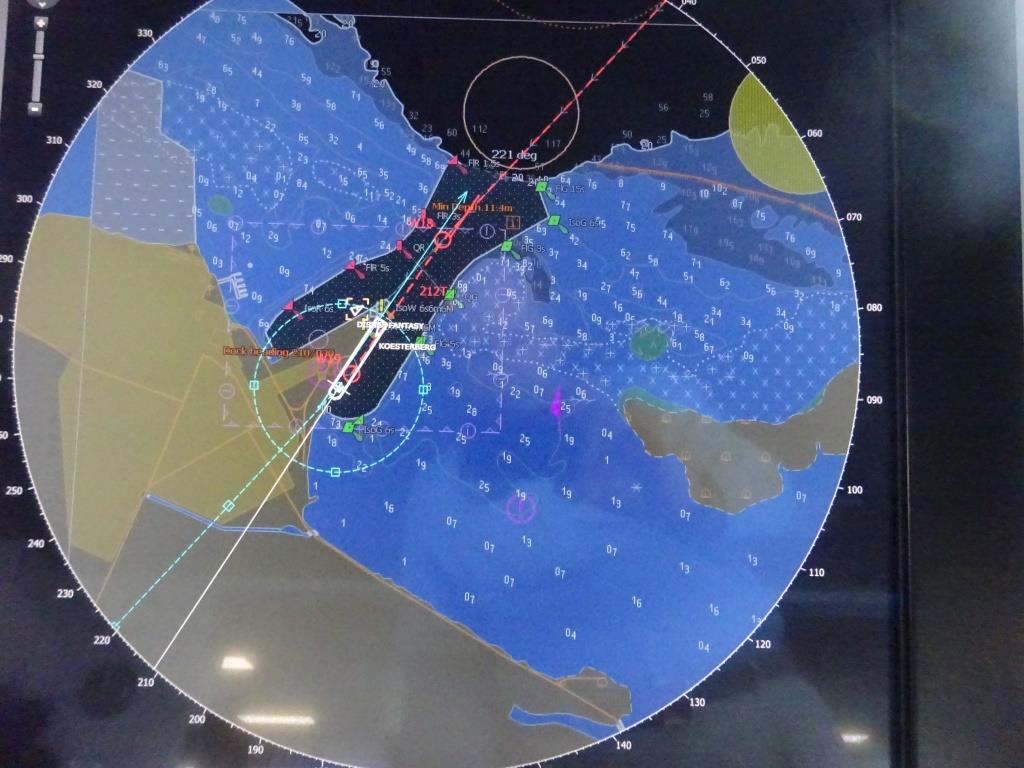 The Resort port of Falmouth Jamaica. A deep water area has been dredged into an inset in the land and a dock for two cruise ships has been constructed. If the port is a success then there is space for more docks.

Shopping was also a good option today. Falmouth is a man made, ready made harbor, created by dredging out a shallow bay and then putting a Cruise Terminal & Resort in. In this case the designers decided to be inspired by the 18th century colonial architecture and thus the shopping village outside the gate looks like a miniature old England in the tropics. A bit more grime and Jack Sparrow could come running around the corner on the way to his next misdeed. Contrary to another ready made dock & village such as Grand Turk, Falmouth has the whole hinterland of Jamaica to offer including the old town of Falmouth itself.  Thus outside the Main Gate there is ample space for Buses to stop and to deal with all the support traffic that comes with a cruise ship visit. It even works for crew changes, as Montego Bay has a good airport and we therefore have mid cruise crew changes here. From the bridge I saw quite a bit of non developed land, so there is room for expansion as well. 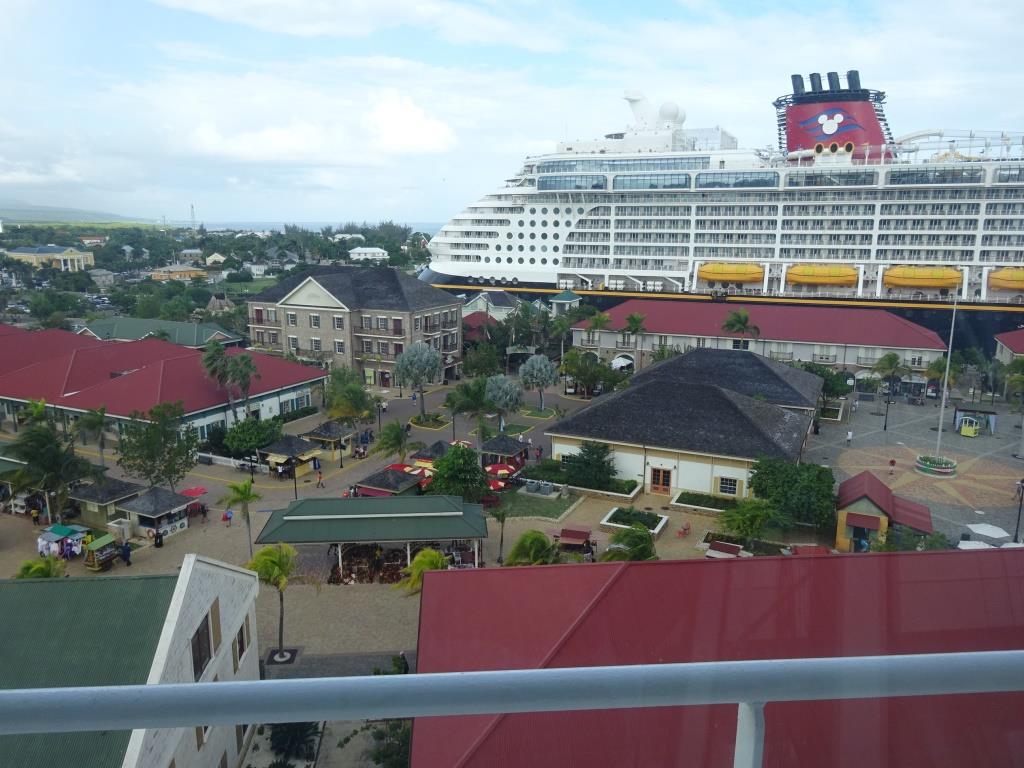 Overlooking the Cruise Terminal. Shops Galore for those who have been before and just want to browse a little bit.

One of the reasons Falmouth was created was the fact that Ocho Rios and Montego Bay were full with ships and not having the option to extend. Putting in Falmouth where it is (halfway between Montego Bay and Ocho Rios) keeps it close enough to the main attractions in the area such as the Good Hope Estate, Duns River Falls and the excursions into the interior and rafting on the Martha Brae. (Just outside the door) The latter is a sort of Wild water rafting Jamaican style, which means it is not so wild. Plus there is plenty of water there as it rains a lot here and that makes for a very lush tropical vegetation and a good reason to plant coffee.

I do not drink coffee but the Jamaican Blue Mountain Coffee is said to be the best in the world; but because the area it grows is limited in size, the price is very high. Unfortunately that resulted in a few less scrupulous people starting to sell other coffee under that name and that gave its reputation a dent. Thus if you do not have a trusty dealer at home then the only thing to do, is to take the tour and buy it at source. (I do not think that Starbucks is selling it)

I always advise guests not to venture out on their own unless it is with an accredited Taxi Driver. The problem that Jamaica has, is that the Jamaicans are wonderful people, but not the ones that hang around the entrance to the port. I have been up in the mountains in the past and was really touched with the openness and positive life attitude of those living there but round the port entrances there were always problems when guests and or crew ventured off by themselves. It has gotten better in the last few years and hopefully the Jamaican Government keeps working on it as it gives this wonderful country a bad name just because of a few people.

Tomorrow we are in Grand Cayman, 216 Nautical Miles to the West and we will have 4 ships in. There were supposed to be 5 but one has cancelled and that will relieve the pressure on downtown a bit. We are supposed to have a regular Caribbean day with the normal Trade wind blowing but we will see. Today the weather forecast was wrong and I was right. It took only until 11 am before the predicted “Partly Cloudy skies” rained down on the ship. As all rain, Jamaican rain is also wet, but it is also quite warm so if you are caught in the downpour at least you do not feel cold.

Ps. The biography of Captain Kevin Beirnaert is uploaded on the website under current captains. Please have a look, especially if you are interested in little doggies. 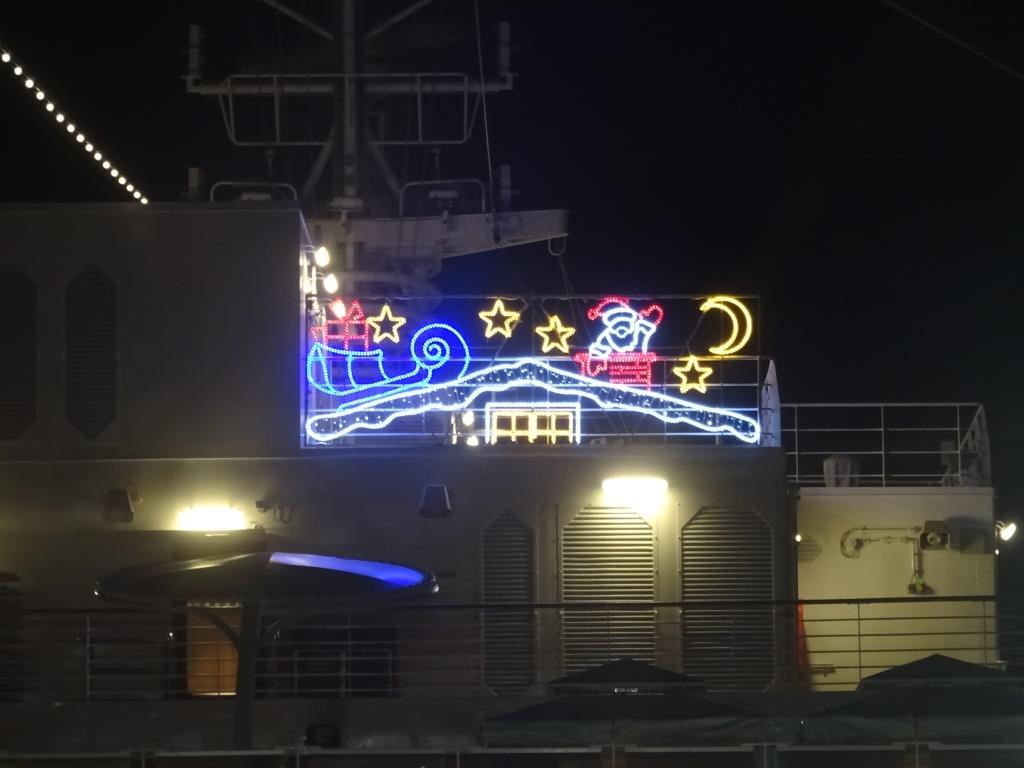 Merry Christmas. With a ship so big it is hard to make an impact with a Christmas tree here and there. So what the company has done, is install these Christmas signs. One on each side of the funnel , one above the magrodome for the Lido Pool, and this one overlooking the Seaview Pool at the stern.