Today was a day in accordance with the photos in the cruise brochures. The way cruise company’s like the ocean to look like and the way they like the weather to be. The sun was shining, the ship was as stable as a rock and the wind was from the right angle.  So it was a good day for everybody. The one thing that for me marred the whole thing is that the Gulf Stream is currently flowing a little bit further to the south than normal and so we had some of it against us. That meant I had to run a fourth engine and there went all my dreams of saving a good amount of fuel this cruise, because of the good weather expectations.  Still there is not much that I can do about that. We are now so far in the crossing that the difference between Great Circe and Rhumb line is almost zero and thus going further south to get away from this current, does not really help.  We just have to live with it.

So the good ship Prinsendam steamed happily on towards its final destination of Fort Lauderdale where we are supposed to be docked by 07.00 hrs. in the morning.  We will be the only cruise ship in that day. Not unusual as it is a Friday and the ships calling in at the moment are mainly on the 7 day service and thus Saturday and Sunday ships. That makes it possible that we can dock again at Pier 26, the Holland America Terminal. On March 12, when we left for our cruise, we had been banned to terminal four, which is not ideal for ships with a lot of provisions, stores and luggage. Pier 26 has an enormous storage shed and podium in front of this shed so no problems at all.

Still that is another three days to go and we continue to “wrap up” all the HAL standard activities that are part and parcel of the cruise experience. The parties continue and also today we hosted our 3rd and final Mariners Luncheon. This time it was the last 250 guests who were members of the “Most Honorable Society of Holland America Members” as I always call it. For this cruise that is everybody on board. This is a situation that only occurs on one other ship and that is the Amsterdam during the world cruise. It says something about the popularity of the Prinsendam. 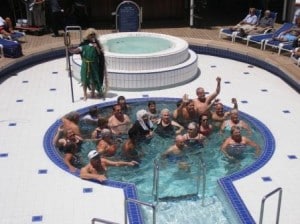 Today we also passed the half way mark of our crossing.  This meant that the cruise director had planned another “swim in the pool” to mark the occasion.  I have now seen him swimming over the equator, over the Pole circle (both northern and southern half) and even through the Panama Canal. All of that in the Lido pool on deck 11.  For those who found that too much excitement, there was the kitchen and store room tour.  The Prinsendam is blessed with kitchens on three decks. There is the main serving kitchen on deck 7 adjacent to the dining room. Then there is the main preparation kitchen on deck four and there is the Lido kitchen on deck 11.  Altogether we have more kitchen space onboard than on the Vista Class.  That means that the whole kitchen is spacious and the guests can walk the whole length without any obstacles in the way. By the time that they exit at the back, they end up in the store room area where we store everything for the whole voyage.   This is also an event that we can only do on a long ocean crossing when we have the time to spruce up the whole storage area for guests visit and (this is no joke) roll out the red carpet.

In the mean time I am keeping a close eye on the weather as it is good, even very good today as mentioned in the beginning. Still tomorrow will be a day of change as during the coming night a small frontal system will pass by and then the wind will change. We will have some thunder and lightning in the night; in the distance to the North of us and most likely some rain. Later on in the morning it will be sunny again and then we have to see what Cape Hatteras is cooking up next.  The track line between Madeira and the Bahamas is simply too far up the North Atlantic to avoid it all.