Last night the wind suddenly picked up and kept blowing until the early morning. A small frontal system that was lying to the North of our track line, intensified and thus it got a tail long enough to sweep over the ship. That resulted in wind and rain, luckily only during the night. In the morning the sunshine returned and the wind slowly abated during the day. So things are looking good again. Mother Nature might not be following the weather forecast but at least it schedules the wind and rainy weather during the night time hours. We will keep this sunshine again until tonight, when we will get a bit of rain and then tomorrow the weather will be sunny again with the swells dying off. The jet stream which controls the movement and directions of the depressions coming from the Cape Hatteras area is lying a bit to the North and thus the weather systems tend to stay further north as well. That means that in this area we might get the tail end of them and some swell, but we are staying out of the centers where the weather is the worst. All in all good news for everybody and we are keeping our fingers crossed that it remains that way. The long term weather forecast for Fort Lauderdale looks good as well and that all together gives high hopes for a very nice crossing.

Today we sailed over the centre of the North Atlantic Ocean where the mid centre ridge is located. This is the area where the European plate goes under and the American Continental plate comes up. The movement of these plates is of course extremely slow but there is movement and thus volcanic action. Nothing to worry about, although the Atlantic Ocean is here at it shallowest, it is still about 4000 feet deep. So with the continuous volcanic action far below us, there was a lot of action onboard the Prinsendam as well. The daily program was crammed full of activities for the guests to enjoy, including a fish barbecue on the Lido Deck. Hotel had arranged for a 100 kg. Tuna fish to enjoy and interest was “extensive” as they call it. 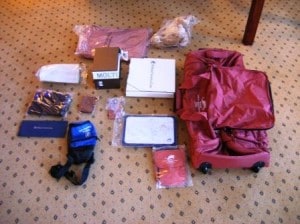 Some of the Grand Voyage Gifts. I always try to collect one complet set from each voyage, to form a complete record of such a voyage for later donation to the Maritime Museum.

As this is a Grand voyage, the guests receive Grand Voyage gifts on a regular basis. Every few days, a small or large gift appears on the pillow. Every night there is a little card with a “thought for the night” as well. The gifts are quite often appropriate for the port or area that we are going to. So before we came to Africa, there was a “survival roll” with all sorts of items to survive Dark Africa and when we entered the Med. there was the Camel to prepare ourselves for Egypt. Then there are postcards of the HAL ships (by Stephen Card) Diaries, and now coming closer to home, there is a luggage trolley (to put all those amenities in), luggage tags and luggage straps all with the logo of the cruise. Piece de Resistance is of course the HAL plate to commemorate this long cruise. When our cruise starts, we always have a lot of luggage to load. On average 3 pieces per guest, and with the luggage trolley that goes up to at least four, so when the ship arrives in Fort Lauderdale there are about 2,800 pieces of luggage going off the ship. This is sometimes mind boggling for the longshoremen, as they offload the same amount off a 7 day cruise ship that carries 2,400 guests. The amazing thing is that we are still able to get all that luggage out in about 90 minutes and have it all laid out in the cruise terminal, for collection upon disembarkation. Although the latter is not strictly true, as a lot of guests have their luggage shipped home and only have to identify it for the shipment.

The challenge is to get all the luggage trolley’s (which all have a tan color) linked to the right owner. Many guests adorn these trolleys with strings and bright colored labels to make recognition easier; or simply use them as hand luggage when going off the ship. I mention a tan color, as that is the key color for this voyage. The previous one, South America had light blue, and last year we had Sahara Sand color and dark blue. Before that, there was green as well. These amenities and colors are planned far in advance. We have a lady in the office who together with the Hotel managers of the Amsterdam and the Prinsendam selects and prepares all these gifts. The selection is not that easy. Every year you have to come up with a number of new items, as there are many guests who make the world cruise each year or pop up during at least one of the Grand voyages of the Prinsendam.