After seeing what North Pole ice looked like yesterday we sailed south towards Spitsbergen again. The top of the mountains of the island were never out of view. The air was so cold and clear that we could see the mountain tops over 40 miles away. About half of the mountain ranges were still visible, their basis lying under the horizon of course due to the curvature of the Earth. As explained in my yesterday’s blog, the ice was closer this year than on average as the summer near Spitsbergen had thus far been very cold. Last year when the Prinsendam did the same cruise they had to travel, full speed, another four hours to reach the ice. Followed by an extra four hours to get back again on track. So an extra journey of 160 miles in the same time span available to me. So I decided to deviate into the Gronefjord which is a side arm of Isfjord at which end Lonyearbeyen is located.

Main attraction in Gronefjord is the Russian coal mine. It was originally Dutch, reason for me to go there but the Dutch sold it in 1932 to the Russians and they have been there ever since. It has one street and that is enough to get the Russians to the mine and back home again, all 400 of them. It is isolated; the only contact with the outside world is by boat to Longyearbeyen and from there by plane. Being founded by the Dutch, who gave it the Dutch name of Barentsburg. As a matter of fact the whole area is full of Dutch names. Some reaching back to the 17th. century the hey day of Dutch exploration when Willem Barentz went North and explored the area.

Further into the fjord is an abandoned whaling station and I was informed by “experts” onboard that this was used by the Dutch for a long long time. Maybe somebody can confirm this or debunk the myth. Anyway a good excuse to go sightseeing. So by 8 am I was swinging the ship around in front of this rather desolate place with the Prinsendam guests out in full force, lining the decks. Looking at the wooden sheds still standing; it could not have been abandoned for that long, maybe 40 years or so. The sun was merrily shining which took the chill off the outside temperature. It eventually reached a high of 16oC / 61oF out of the wind. 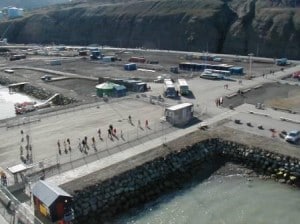 From there it was another 28 miles to the dock and I was sitting with the ship in front of it at 10.30am waiting for the German cruise ship Amadea to move to the anchorage. Longearbeyen only has one dock and it is extremely busy here in the summer. So the harbour master tries to please as many as possible and the Amadea got the berth from 0600 to 10.30 and the Prinsendam from 11.00 to 18.00. Then a reefer ship was going alongside for the night. Also in the bay were a Russian expedition cruise ship, the Quest a similar expedition ship but more luxurious, the Norwegian ice breaker Odin and two Dutch sailing ships the Antigua and the Weltevreden. Not to mention various other commercial craft. The Amadea left the dock with German clock work precision and by 11.15am I had my guests streaming ashore. 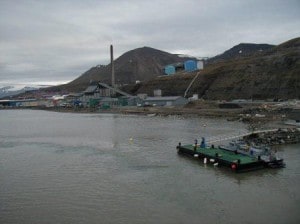 The town is in the left of the picture.

There is not much to do in Longearbeyen but being in this place is an event in itself. There is a museum about the history of Spitsbergen and a wilderness centre and we ran a tour there. The traffic signs about crossing polar bears (there are over a 1000 on the island) got as much attraction from photographers as anything else. On a sunny day it did not look so bad but it must be a very lonely place in the winter. We sailed away from the dock at 1800 hrs. still in glorious sunlight and with the magnificent scenery of Spitsbergen all around us. We are now starting our journey south, with three calls at Iceland but first two days at sea to get over the polar cold.