Today was the highlight of our cruise. Most places we visit on this cruise you can get to by airplane somehow or the other but for what we did today you need a ship. First on the agenda was scenic cruising in Magdalena Fjord. It is an inlet at the North West side of Spitsbergen. Because it is fairly narrow, the ship comes quite close to the glaciers. It is somewhat comparable to College fjord in Alaska, with the same number of glaciers but compressed into a fifth of the space. The fjord twists and turns around two shallow patches and that makes for tricky navigation. But that is the fun part. There are no pilots here to spoil the good fun; this was the sort of cruising I went to sea for.

With my senior navigator plotting the ships course every three minutes I sailed slowly into the bay, twisting and turning and by 8 am. I had parked the ship in front of the central glacier called the Waggoner Breen. Called that way as the dirt streaks in the glacial ice just look like Wagon tracks. I had to stay about a mile from this glacier as it had retracted and there were no soundings in the chart in the area now vacated by the glacier. Theory says that it should be deep there as well as the glacier also created the fjord where the ship sailed through but I was not going to test that theory. Plus this glacier looked much better from a distance with its whole length being visible all the way up the mountain ridge. The weather was overcast and that is the best for glacier viewing as you do not have the glare of the ice which you get with a sunny day.

By 9 am. We were outside again, speeding north towards the Top of the World as far as Mother Nature would allow us to go. My last ice chart, from before we lost all regular communication with the outside world, had indicated ice about 60 miles north of Spitsbergen and thus we headed that way. My calculation was to see the first pieces of floating ice around 11.30am and with the excellent visibility due to the cold weather; outside temperature was now a chilly 4oC or 41oF with the water close to freezing; I could keep up the speed until we could see the ice floats. We saw the first one around 10.30am, just a single big blue piece but enough to indicate that we were coming closer. That was the time to come down to maneuvering speed on the engines. If you are on maneuvering speed setting, you can give full astern on the engines without upsetting the chief engineer. You can safely do it as well with full sea speed in the case of an emergency, but it means that the engineers later have to reset a lot of auxiliary equipment, including, air-conditioning and hot and cold water. So better this way. By 11.15am we saw the rim of Arctic ice coming in good view and thus was it time to go slower and slower.

Now I thought that I had my chance to have the nose of the Prinsendam into the ice at exactly noon time but the ice keep moving north slowly. Away from the ship. It was completely wind still and the West Spitsbergen current pushed the ice slowly to the North, as fast as I was moving the ship towards it. Thus it was only at 12.15pm that I could blow the whistle with the bow wedged into the ice flows. Because this is frozen sea water, the ice is fairly flat and no deep chunks of broken off Glacier material. Therefore it is not dangerous to do this, especially as the Prinsendam has an ice strengthened bow. I just had to be careful to make sure that the ice was not getting close to the propellers. 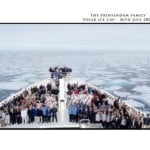 Photo courtesy, Sr Ships Photographer.
It is a bit of a tradition on the Prinsendam, that when we put the bow in the ice, we have a crew photo taken. As you can see it looks fairly dramatic with the nearly solid pack ice in the background.

By 12.45pm, I pulled away from “the North pole” and headed south again. We had come to 579 miles from the North Pole. 80o20.6N – 10o28.65E. and I could happily announce to the guests that they were sailing on board the most Northern Luxurious cruise ship in the world. Because it has been a cold summer here thus far, the rim of the ice was more to the south than on average and so I had now some time left in the schedule. Tomorrow I can only dock in Longyearbyen after 11 am. The dock is occupied until that time and with time in hand I am going for a little deviation. It is not in the brochure but courtesy of a nosy captain, who has never been to Barentsburg, the old Dutch whaling station. The west side of Spitsbergen was once very much Dutch territory in the whaling days and a lot of names still remain from those days. By 8am tomorrow morning I will be laying off the ruins. At least I will have 250 happy Dutch guests.