Today we travelled up North; to the Top of the World, as our cruise is called. This meant going full speed as it is a long way to Spitsbergen (or Svalbard as the Norwegians call it) as we also had some sightseeing to do while on the way. The day did not start very promising with high winds from the East and very low skies with fog banks all over the place. The first scenic stop, or better sail by, was Bear Island which is about half way up between the Nordkapp and the south point of Spitsbergen. The island roughly looks as an inverted triangle with some hills and mountains to the south and it flattens off towards the North. Flat: seen in relation to the average height of everything. Compared to the Spitsbergen you would call it flat, compared to Holland you would call it mountainous. With full sea speed it takes about an hour to sail by the island and we did so. Keeping the island on the West side, we could sail in its lee and thus keep the guests on deck fairly well out of the wind chill. Today it was not a cruise, it was an expedition.

The south side, which has the highest elevation, was partly obscured by fog banks but as we sailed close about a mile of off shore the shoreline was quite well visible. The chart for Bear Island is accurate with all the shallows and rock clearly indicated and by following the Prinsendam’s track from last time (they did not run aground then) I knew I was conducting a safe passage. The island is geologically of great interest as the surface is not made up of volcanic material but of regular sediment layers that long long time ago were pushed up to the sea surface. These various layers are clearly visible when sailing close by. When we came further to the North, the fog lifted and we could see over the island. It looked like a lonely and desolate place. Still there are people living there, on the North side there is an Observation station. It is manned by polish nationals and looking at the housing facilities there must be about a 100 people living there. I am wondering what life must be like there during the winter time as it already looked like a forbidden place today and this is high summer. 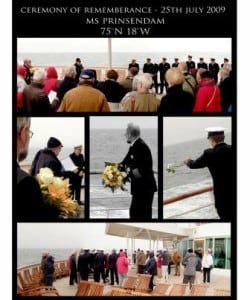 Courtesy On board sr. Ship Photographer.

From Bear Island we sped on northwards and while doing so we had the next item on the agenda. One of our guests had requested to hold a small ceremony to remember the merchant navy sailors who perished during the Murmansk convoys of the 2nd world war. During the height of the Russian campaign of Nazi Germany, the allied forces shipped enormous quantities of war materials to Russia. Tanks, ammunition, airplanes etc.etc. It all went by ship of course and these convoys came under constant attack from German fighter planes as soon as they came near Norway. At one time Germany had about 75% of it’s air force involved in these attacks. I do not know the correct number but 1000’s of seamen lost their lives during these transports to Murmansk. I believe that includes about 700 Dutchmen as well. So at 13.15 in the afternoon I brought my officers down and while we all braced the inclement weather we remembered those who gave their lives for our freedom. The chief engineer threw a bouquet of flowers into the sea. He was asked to do this as he is the most senior crewmember on board with 38 years of service with Holland America Line.

By late afternoon we arrived at Spitsbergen and sailed along the West coast. Here the skies were clear and a good view could be obtained by all. The weather remained windy, especially when we passed Horsund and the wind came funneling over the glaciers. We had at one moment 50 knots of (very cold) wind blowing on our starboard side. In this area I had to stay about 5 miles from the shore line as there are numerous shallows and cliffs along the shore. Luckily the glaciers are so large here, especially the Torelbreen, which is about 3 miles wide. So you do not have to be close up to get a very good view of Mother Nature. The cold air takes care of that as well; we had visibility of up to 40 miles at times.

Tomorrow is the highlight of the cruise. First we go to Magdalena Fjord for the glaciers and then I am going to try to find the North Pole ice. I managed to get a good ice chart from the internet today and it looks like it that I will be able to push the Prinsendam nose into the ice and keep our schedule. The ice flows are quite far to the South as it was a very cold summer here thusfar. We are now so far North that we are starting to loose our regular satellite telephone communication, our internet and our email and that means I will only be able to upload this blog about two days from now.

However we also lost CNN, so life is not that bad.