Apologies for the delay but at the top of the world there is no Internet connection. Capt
Albert, 28 July 2009.

The town of Honningsvag is located just at the east side of the Nordkapp in a sheltered bay. Basically we sail east, then south, then north into the harbour and then dock on an easterly heading. Full circle to get there. It is really located at the top of Norway. We started sailing along the top of Norway in the early morning and passed the Nordkapp at a distance around 07.30. After departure we had a good look at her from nearby. During the night the wind had started to freshen up from the East and that was less good news, as it blew the clouds away and that could mean a greater chance of fog. So I said a little prayer for overcast weather during the day.

I reported yesterday that our Cruise Director did his across the Arctic Circle swim and I do not want to deprive you of some proof of that event. I am quoting the text that he sent to the HAL Seattle office for our in house magazine. 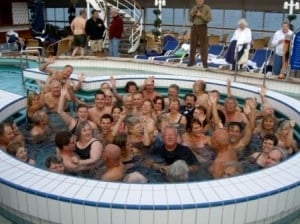 At that very (EARLY) Moment, the Entertainment Team, led by the Brave Explorer (in his Bermuda Tuxedo) Cr. Dir. Thom Faulkner, encouraged the Guests of the Prinsendam to join them in a special version of the Polar Bear Swim. With over 100 guests looking on, 47 guests and the Entertainment Staff braved the Icy Waters of the Arctic (the Lido Pool) to join the Ancient Order of the Blue Nose ~ the traditional Seafaring designation for mariners who cross the Arctic Circle into Neptune’s most Dread territory ~ as they make their way to The Top of the World!

Although there was a good wind force 6 blowing near the Nordkapp by the time we were nearing the pilot station it was nearly wind still, tall mountains shelter the port from any wind except due South and even then it would be less than in a fully exposed area, as the opposite end of the bay is also enclosed by a mountain range. The port is not that big, but it has deep water. The largest berth had been assigned to us, but even that one, was only about a 100 meters of effective length. By the time we would be in position we would be less than 2 meters with the bulb from the shallow rocks and half the ship sticking out. Thus I took my time with the approach and slowly inched the Prinsendam forward until we came to the point of NO FURTHER.

Honningsvag is not a big place but it is very cute. Apart from living from the fishing business it is on the road to the Nordkapp and thus gets its fair chair of tourism. As matter of fact, right where I stopped the bow of the ship there was a Dutch car parked with caravan that must have made the journey all the way up to the top of Norway. Although the golden days of Dutch expansion are long over, you can still find my countrymen everywhere and often with a caravan, as that is the most cost effective way of travelling.

Although the sun does not set yet, it is getting darker in the evening and this time it was compounded by a lot of hazy stuff near the horizon. The sun had been shining all day, giving us a great day at the town but luckily a lot of the sky remained over cast as well so the temperatures could not increase too much. And we were lucky. The tall wall of Fog remained about 10 miles to the North of the Nordkapp and we only had to deal with a few wisps of Arctic Sea smoke that did not reduce our visibility.

It is always a matter of opinion to decide how close you go to a Cape for sightseeing. If you go very close it becomes awe inspiring because of the sheer size, if you stay further away you get a better overview. I decided to go as close as I could go without loosing the overview, e.g. as close as possible but with being able to see the sun dial and the restaurant on the top of the Cape. It turned out that the perfect distance was about 3000 feet away and we did so. We could see that it was a busy day at the top, 309 meters above sea level, and I counted at least two hundred people looking down on us from above. So I gave them a blast on the whistle before I turned the ship back to open waters.

Tomorrow we are at sea again. Passing Bear Island around 11 am. and making landfall near Spitsbergen (Svalbard in Norwegian) near 5 pm. There is a minor disturbance in the area, so it will be a windy day.