Bodrum is a Turkish sea side resort which is in the winter very quiet with only some European “snow birds” present. In the summer time it is a very busy vacation area for mostly British and German tourists.  Also the whole area is then full of Sunday sailors as the bay gets the Etesian winds from the North, very good for  safe sailing as it is sheltered enough not to get bothered by  the waves that these winds can whip up over open waters.  But as it is April, the season has not started yet and thus a perfect time for the guests to visit and a good time for me to enter the bay without having to dodge the sailing boats.  Bodrum has invested in a new pier, located to the south the town and that is where we were heading.  The pilot boarded about a mile from the pier and directed us to go to the North side of the pier. On the Southside a little ferry boat had been parked and that took up too much of the docking space to allow me to sit there as well. The north side was in principle not a problem, until we saw the barge. At anchor perpendicular to the dock. It turned out that they were busy extending the pier with two Bollard/islands or large dolphins so that in the future ships of up to 340 meters can be accommodated. Good idea but it would have been nice if we would have known about it before hand.  So I had to swing the ship around, go past this barge and then come sideways towards the dock. As it was all deep water, not exactly a problem but it took an extra 20 minutes. Luckily I like to be early, as I have a grave respect for Murphy’s Law and thus like to take my time and as a result we were still timely docked.

In the coming two days we will be sailing through the Greek Islands. That is scenic enough to do it during day time but the schedule does not allow for it. Also it is a bit difficult to plan as you have to ensure that you sail all the time on the sunny side of the islands, otherwise you cannot see anything due to the strong glare of the sun. I figured that one out in 2001, when I was spending a day at sea over here with the Noordam after having been blown out of Mykonos anchorage with wind force 11.  It all worked out nicely and the guests saw all the islands that are so well-known; Lesbos, Patmos, Mykonos,  etc  etc. but by the time I was heading for Pythagorion on the Southside of Samos,  our track line looked very much like one of a drunken sailor, doubling back a few times to his favorite pub.  With the weather looking extremely good for the moment, also the long term forecast, it means that we can do the ports as scheduled. 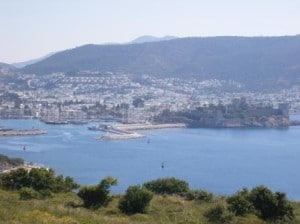 Bodrum Castle. One of those big Turkish flags can be seen as the big red dot above the Greenery in the right centre.

Bodrum is an ancient place; know from antiquity for the tomb of King Mausolus, not longer there, but its name Mausoleum lingers on in numerous languages. Later on the Knights of St. John appeared and recycled most of the stone of this Mausoleum into a castle that is still there.  The towers are now dominated by an enormous Turkish flag. The love of the Turks for their flag is clearly evident as you cannot turn a corner or look at a hilltop and there is one.  If I ever had to settle down in Turkey and find myself a job, I would become a flag supplier. Impossible to go bankrupt with such a demand. The windy weather must ensure a large turnover as the flags looked all to be in pristine condition. 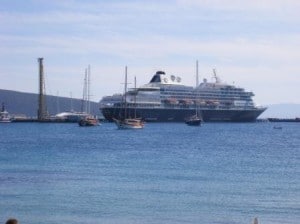 By 5 pm. we had all the guests back onboard and we sailed out of the port. I had to use a tugboat this time as this Etesian wind was blowing very strong and full on the beam of the ship. The construction barge made it necessary to go first at least 200 feet sideways before it was safe to move forward.  From there we sailed through a passage between the island of Kos and the Turkish mainland. If you are a Turk you call it Bodrum Bogazi and if you are a Greek you call it Steno Ko.  Both mean the same.  While going through here I was very happy that it was not high tourist season yet.  The Strait is wide on the surface but underwater shallow near the sides, so it is important to stay in the middle while going through.  For the remainder of the night we will follow the Turkish coast on a North Westerly course with most of the Greek islands on our portside, but still some of the smaller ones on the Starboard side.  By 3 am we will be abeam of Nissos Samos and we will sail around that island to approach Kusadasi in the early morning.

As mentioned already, the weather is looking good and that means that we are looking forward to another glorious day. Although Kusadasi has some very nice shore excursions and sights to see, I think that a lot of guests will be focusing on shopping tomorrow as the quality offered is very good, the prices reasonable and the variation enormous.  Roving reporter Lesley is not escorting a shorex tour tomorrow and I wonder why.