After leaving Turkey and cruising a whole night through the Greek islands we approached the Turkish mainland again in the early morning. I had set my pilot time for 06.00 as I wanted to get in before the sun got hot enough to get the Etesian winds going.  The two cruise docks of the port have been constructed in a NW direction, so most of the time you approach with the wind right on the stern.  That means that you do not drift. That is the best you can have as being pushed forward is easier to control than being pushed sideways.  The main engines are always strong enough to cope with the push forward, the thrusters not always with the push sideways.  However the wind does not always blow from the North West, it can come from the North East as well and then it is almost on the beam and if strong enough, will be a challenge for the thrusters.  So the earlier you arrive the less the chance that there is wind.  One good thing is that in the last few years all the Turkish ports in this area have been supplied with a 2500 HP tug. Built in Turkey but designed by the Dutch company Damen, who seems nowadays the tugboat supplier for the whole world, as everywhere the same models are popping up.  Not that I mind, with this standardization you know exactly what to expect and only the quality of the tugboat captain is then the unknown factor.   Today the tugboat was not needed and had parked itself near the corner of the pier to prevent me from bumping into it.  There was a bit of wind, towards the dock, so I used that to come alongside with a controlled drift. The sailors having the luxury not to have to pay out the lines, but they just drop them on the dock, as the light wind held the ship nicely alongside until all lines were tied up. 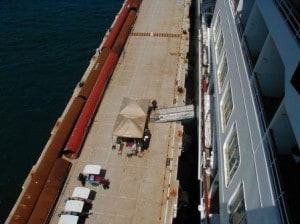 Big steel pipes laying on the dock. These are the pillars of the new pier extension. Once setup vertical they will be filled with concrete.

Apart from having standard tugboats in each port, it seemed that Turkey also likes standard docks. The Bodrum dock is a carbon copy of the dock here in Kusadasi. As the Bodrum dock is now being expanded, it meant that the Kusadasi docks are being expanded as well.  Our dock of 240 meters will in the end be 400 meters long and the shorter one 300 meters. That will make it possible to have the very big boys alongside.  Rumors have it that either the Oasis of the Seas or the Allure is coming to Europe and if that size ships come to these ports, then you need these long docks. Those ships do not have tender capacity at all, nor would it a good idea to try it with 6000+ guests, so docking is a necessity. Turkey wants the business, so they have to provide the docks. Accordingly the dock is coming and that means the ships will not be far behind.

Kusadasi is a shopping heaven. Apart from the fact that it attracts cruise guests, it also has the regular holiday makers each summer, totaling well over 100,000 people a year.  While all that shopping power is coming in, the prices still remain very reasonable. A typical example of not “Killing the goose with the golden egg” My gold was flying out of my purse today as was expected, as there was this leather coat that fitted my better half like a glove and thus we could not do without it. Luckily we saved money by spending it, as Lesley got a good discount.  I stayed onboard as I still have enough leather coats left for another five years, courtesy of a shopping spree in a previous year.   I did not check the draft marks of the ship before departure but I would not have been amazed if we had sunk in a bit further due to all the shopping being brought back.  As the ship is returning to the States, the guests do not have the problem of excess luggage on Trans Atlantic flights. Once in Florida there are umpteen possibilities including help from the company.

We pulled out at 17,00 hrs by going straight astern and then swinging around.  Tonight we will be sailing westward through the Greek islands towards Piraeus, the Port of Athens.  It might be a long night for me, as we have to pass through Steno Kaos, which translates into the strait of Chaos.  Not a bad name as it can be pure chaos there due to the traffic streams from four directions coming together. Traffic streams made up by ships of multiple nationalities, with each speaking its own version of English (hopefully at least a certain version) and having their own interpretation of the Rules of the Road.  If it is busy, then I will be on the bridge for the transit.  Then tomorrow morning it will be a very early arrival as I want to get in before the ferry traffic starts, which has preference over everybody else, due to the fact that they are on a time schedule.

The good news   is that it will once again be a glorious day for sightseeing. Sunny and not too warm.