The season is now so far advanced that the land and sea have slightly warmed up and that” slightly” is just enough to throw things out of balance and let the low clouds come down all the way to the water. Then only a bit of wind can help but we did not have any. So by 22.30 in the evening a low white woolly blanket descended over the Alaskan Inside Passage and reduced visibility to about 1,000 feet. That meant standby for the Staff Captain and me. Him until midnight and then me from midnight to 0600; and then him again. The hours are split up in this way, as he has a department to run with officers, sailors etc. and they work mainly day service, so it is handy that they can reach him. As a captain I can assign my hours the way I want and as long as I am there when necessary, it normally works well.

Thus we pushed the whistle to sound the automatic fog signal (one long blast, at least one time every 2 minutes) and that told the whole world that I was working. This is about the only time that having a Balcony cabin is not a good idea as you can hear the whistle extremely well. At other occasions there is nothing nicer than to see Alaska from your private balcony.

You could see that the reduced visibility was indeed created by the warmer land. By 02.30 in the morning we sailed briefly into the North Pacific Ocean and there we suddenly had 100% visibility. We could see the Volendam (on its way to Juneau) from 7 miles away. Then we turned back inside through Decision Passage and it was all white again. The one item on this stretch of water that is challenging with reduced visibility is going through Snow Passage just north of Ketchikan and south of Zarembo Island. Here all the water is pushed through a narrow opening resulting in currents of around 4 knots at maximum Flood or Ebb. Because there is a 90o turn in the passage, the current is of a concern as you never know how the current will push you around. Every pilot in Alaska has a theory but my theory is, after sailing around here for 30 years, is that no theory really works. You just deal with it when you get there.

Luckily the radars are now of such high quality that you can sail through here without any visibility. And so we did. The current slowed us down but did not push us that much around as expected and once past, we came in the wide open waters and thus the white woolly blanket disappeared. That was at 06.30 the moment that the staff Captain was to take over from me. Some people have all the luck in the world. 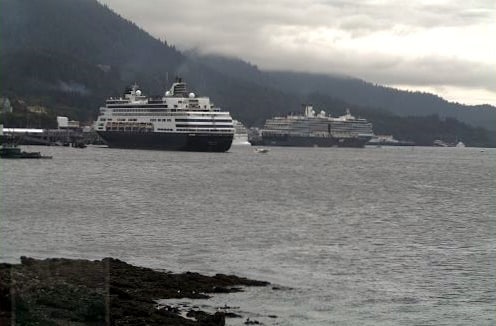 A bit of a gloomy arrival. You can see the Oosterdam at berth 1 in the distance. (Photo Courtesy of a dear reader from Omaha, who watched the webcam)

That gave me 3 hours sleep and then the approach to Ketchikan started. Still a bit gloomy but by the time we docked the sun came out and it turned into a glorious day. One of the best days that I have seen here in a long time. With four ships in port, it was a full house and we had a bit of luck here as the Millennium had departed the night before. You might have seen in the newspapers that that ship had Azi-pod problems. So severe that she is now on the way to the Bahamas for repairs. 5 weeks of cruises cancelled. That is a lot of money. She was docked at our berth after the first repair attempt failed and if she had not sailed, it would have meant that we either had to go to anchor or wait until 1 pm. until the Oosterdam had left and that berth was vacant. 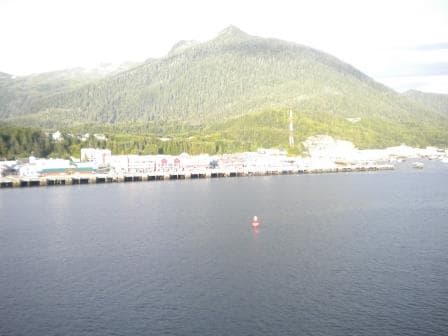 The Shopping area of Ketchikan in glorious sunshine.

Departure came all too quickly and by 7 pm. we were on our way to the Canadian border. I am in a bit of a hurry as I have to catch the early tide at Seymour Narrows to make sure that we arrive on time in Vancouver.

The weather forecast calls for winds in Queen Charlotte Sound & Johnstone Strait, so it might be a bit wobbly in the morning. After that it will be all fair sailing again.