After the wind still and sunny weather in Ketchikan you are bound to pay for it ome way or the other and so we did. As soon as we were in Canadian waters it started to blow. Up to wind force 8. Off Vancouver Island a small disturbance had parked itself right in the corner of the Queen Charlotte Sound and had decided to blow itself out there. So for most of the morning we had a very windy, wet and bumpy experience. By 1 pm. it started to ease off and by 3 pm. we had good weather again, with the occasional shower.

Our day today in the British Columbia Inside Passage was to some extent unusual as we were going through Seymour Narrows by daylight. Normally we have the night tide, sometime between 22.00 and 24.00 hrs. so we can run average speeds to Vancouver. But the tides do not always remain in synch with the Holland America Line Cruise ship Schedule and then either the slack tide at the Narrows is earlier or later. This time I had the option of 20.30 in the evening or 02.30 in the morning. The early morning tide is too late to arrive in Vancouver on time and that is of course a no no as guests have to catch flights etc. 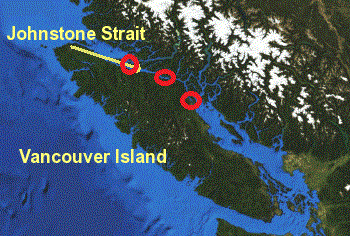 Johnstone Strait runs roughly from Blackney Pass (left circle) to Race Passage (middle circle) to just north of Seymour Narrows (right circle). It separates Vancouver Island from the Canadian mainland and so forms a sheltered passage to the North

Thus the early tide was the only option and that meant that we were sailing the whole of the BC Inside Passage in day light. That basically means sailing through Johnstone Strait for about 70 miles. I brought forward the pilot pick up time at Pine Island by 1.5 hours and that enabled us to sail with 17 knots through the inland water ways aiming for an approach to the Seymour Narrows by 20.00 hrs. 30 minutes before slack tide. The golden rule is always to get through just before slack tide or just after, as on the tide change every slow craft (mainly tugboats with barges) want to get through. The pilot concurred with that idea and the plan was made up to be right in the Narrows at 20.15.

We had the (flood) current with us and that also means that if you approach the Narrows with the flood in the back, you have the right of way. Trying to stop with a following current is much more difficult than with having the nose in a current that is pushing against you and thus that rule was made. By the time we were going to Blackney Passage we had 4 knots of current with us and that flushed us nicely through the hole. Blackney is an excellent place to watch Orca’s as there are some resident pods there. However they were not in residence today and we had to make do with a number of lost dolphins that were swimming around the edges of the back eddies that the strong current creates over there.

By the time we came to the next narrow part, Race Passage, it was the fishermen who were creating a bit of a diversion. A fisherman tends to focus on fishing and adhering to the Rules of the Road is sometimes considered an unnecessary distraction. First we had one crossing our bow at a location where it did not make sense and none of us could understand why he persisted as it must have been very unnerving to have a big blue hull charging down upon you with 20 knots. So the pilot changed course a little bit and all was well. 5 minutes later” his brother” wanted to come around the bend in a place and a way that was not exactly according to the rules either; so he had to be spoken to and put on the right track.

As things always come in three, our final event of the evening was overtaking a barge that was also on the way to the Narrows but on a later schedule. So after a conversation with the mate of the tugboat, we made overtaking arrangements and nicely overtook before we had the final line up for the Narrows. Behind us was the Celebrity Century who had to deal with the same issues but 15 minutes later. That happens when you sail in a convoy from one place to the other.
As soon as we were through the Narrows itself we saw a whole line up of barges, fishermen and other small fry bucking the tide, and waiting for us to clear the waterway, and of course for the tide to change. With the following (ebb) tide they can then make some extra speed towards their destination.

Tomorrow at 07.00 we will dock at Canada Place and that will be the end of this cruise. The weather is supposed to be glorious; no wind and a sunny day. Going in, we will have 4 knots of current with us under the Lions Gate bridge and mother nature will thus give us a push us towards our destination.