It turned out to be a real Vancouver day. Nice and sunny with hardly any wind. A perfect day; a Sunday for us but also for the people of Vancouver who in great numbers were parading up and down the promenades of Canada Place. It gave the navigators on watch something different to look at, a nice change from just wind, sea and water. We are at the moment entering and leaving Vancouver at the maximum tides. 4 knots under the bridge when coming in and going out. That gave on arrival the interesting situation that we made the turn around the East end of Stanley Park (Brockton Point and Burnaby shoal) and then let the current set us towards the dock. With 4 knots of current pushing on the portside of the ship, that sideways movement is quite fast but it diminishes when coming closer to the dock and thus it is a matter of regulating the movement to make a safe docking. As the current off Canada place is never exactly the same it remains necessary to play close attention to the movement of the ship. It never becomes a real routine here, or anywhere else in Vancouver Harbor. By 07.15 hrs. we were safely docked and our change over day started.

Today we had something in the planning that only occurs once a year. Namely the checking and compensating of the ships magnetic compass. Although we have two gyro compasses on board, it is still compulsory to have the old fashioned magnetic compass on board as well. If you lose electricity, the gyros do not work but the magnetic compass always will as it just reacts to the earth’s magnetic field. If you would have a magnetic compass standing in an area without any steel nearby, then it would indicate the correct magnetic North. 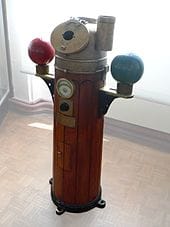 Example of a magnetic compass. The one we have on board is similar, but heavily wrapped up in plastic and tarp to protect from the elements as it is standing in the open on the top deck of our ship. The green and red ball on either side are part of this “trick program” to eliminate the influence of the steel of the ship on the magnetic compass.

Unfortunately the magnetic compass on board is standing on a steel or aluminum deck surrounded by lots of steel causing all sorts of interference and anomalies. Thus arrangements have to be made to “trick” the compass into believing that there is no interference. This is called compass compensation. We do it once a year as there is always some change to the ships magnetic field. We keep changing the ship by adding or removing steel volume and after a while the compass indication is not correct anymore. This is called the deviation of the compass. 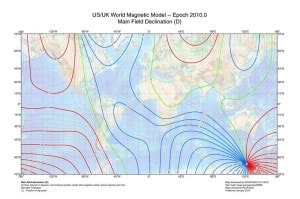 The earths magnetic field is basically caused by the steel core of the earth. As the rock crust of the earth does not have the same thickness everywhere, the variation varies from location to location. See the varies lines on the chart, which are called Isogones, that indicate area’s with the same magnetic variation.

Without going into too much technical detail; it works with the formula: True north = Magnetic north + Total Correction. That total correction is made up from the Magnetic variation (or magnetic declination as it is also called, indicating how far the magnetic north pole is from the true north) and the deviation (the ships influence on the compass) The variation we can find in the navigation chart, where each compass rose has a note saying that for that area in the world the variation is anywhere from 1 to20 degrees off the true north.

That leaves then the deviation. Here the compass adjuster comes in. He/she (although I have not come across a she yet) will try to minimize the ships influence on the magnetic compass as much as possible. This by strategically placing little magnets which offset the ships influences. You can learn this, I learned this at the Maritime Academy as well, but it is as much a art as a science; as the compass circle is 360o it is nearly impossible to get that into a perfect equation. On top of that every ship is different. The only way to get it right is to do it often, very often.
Thus on departure Vancouver, we spent an hour compensating the magnetic compass. I was running for the late tide in Seymour Narrows, so we had plenty of time. It takes about an hour and in this period the ship makes a full 360o turn and the compass compensator checks the magnetic heading of the ship with the true heading, taking into account the magnetic variation for that area. If the difference between magnetic and true stays the same then it is ok, otherwise he will adjust a small counter magnet inside the compass stand to correct for the –deviation from the regular. Hence the word.

We started at 17.30 and 18.30 it was all over. The compass adjuster found a change from last year and corrected for that. The change was most likely caused by a new black – box pod that we installed on the top deck. But that is a different story. By 18.45 he left the ship again by means of a harbor launch and we headed to the North.
Early tomorrow morning we will go through Seymour Narrows and then sail the BC inside passage. The weather forecast for the night is very good, but for Queen Charlotte sound very bumpy weather is predicted.