Bergen is tucked away inside the Norwegian Fjords and as a result it takes a while to get there. Regardless whether you come from the North or from the South, it is a considerable distance to the dock. Thus the pilot boards early to enable a timely arrival. We had a bit of a wobbly night, with a long swell running from the Greenland area where they had had some very inclement weather a few days ago and the swell generated by that weather front came rolling all the way down the Norwegian Coast. We had wind as well, coming from the South West and so the pilot boat skipper decided to wait a bit further inside the entrance before he came alongside.
That was just fine by me, because then I was also completely out of the swell. Once you are inside the mountains on the side of the fjords they provide great shelter from all the elements except rain. The whole coast line of Norway is dotted with pilot stations serving all the various small and big ports inside the fjords. The Pilotage system is divided in area’s as the whole coastline is much too big to take one pilot onboard and keep him onboard for all the calls. Each port that we do this cruise we will stop at a pilot station, get a pilot onboard and disembark him/her again at the end of the call. Same as we do on other cruises, only this time it is all within one country.

The South pilot station of Bergen is called Marsteinen Pilot and the North Pilot station where we disembarked the pilot after leaving Bergen is called Fedje pilot, named after the location of the pilot station itself. From the Marsteinen pilot it was 23 nautical miles to the dock. However you cannot do the whole run on full speed, the fjords and connecting waters twist and turn and for that you have to slow down. Also I am very careful when I pass areas where there are boats moored along the waters edge. A complaint about wake damage, whether real or fictitious is quickly made. This time we were docking at the Bontelabo dock, which is on the side of the old harbour and the dock is too short for the ship. That means we are hanging over at each side and have to give out long lines to the docks further in. That takes time and all of that has to be calculated into the time needed to get to the dock from the pilot station.

Although the days are already getting shorter, it is still fairly light in the early morning and thus the trip in is very scenic with lots of houses on the shores on each side of the fairway. Simple houses but also some very expensive real Estate. Especially when you get closer and closer to Bergen itself. If you are ever planning to design your own house, a water sightseeing trip past Bergen’s real estate will give you some great idea’s. The city itself is located around a large basin of water with several port areas all with deep, sometimes very deep, water docks. Also with our dock there were no issues whether there would be enough water under the keel. There was plenty. Docking at a dock that is much shorter than the length of the ship has to be done in a special way. The head and stern lines that are holding the ship alongside have to be carrying evenly otherwise the ship will only partially rest along the dock as either the bow or the stern lines will pull the ship in and result in the ship pivoting on the forward or aft corner of the dock. 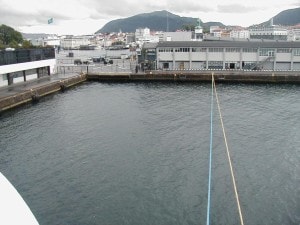 The stern lines at Bontelabo nbr 2 dock in Bergen

The simplest way to solve that issue is to bring the ship in line with the dock, in the right position (dictated by the gangway) give spring lines ashore; make them tight so the ship cannot move forward or aft again and then move the whole ship bodily sideways until it makes a square landing. The only thing left then is to bring the long head and stern lines tight and make them evenly balanced. That was the plan we had discussed beforehand and that was the plan we executed. So while I kept the ship alongside with the thrusters, the chief officer wove his magic carpet of mooring lines fore and aft that would keep us perfectly alongside for the day. While he was doing that I had ample time to mutter about the weather forecast, which was completely wrong this time. It had been talking about cloudiness and maybe a little peak of sunshine coming through but what we had for most of the day was liquid sunshine. However it did not deter our guests from having a great time in Bergen.

The sun came out on departure and we had a glorious sail away. We were the first ship in and we were also the ship leading the cruise ship parade out of Bergen. 32 miles and 2 hours later we were at the Fedje Pilot station which forms the Northern exit of the Bergen area. Once the pilot was off, I cranked the ship up to full, as it is a tight schedule to Kristiansund our next port of call. I am supposed to get a bit of current with me but the still very “wavy” weather will cost me some speed as well. It will be a bit of a bumpy night tonight with the Prinsendam slowly pitching on the long running swell.