As the bumpy seas were caused by a disappearing weather system near the top of Greenland, the waves became less and less during the night and by the time we arrived at the pilot station the ship was only going up and down with a very gentle movement. By coming midnight it should all be gone. It was a regular traffic jam at the pilot station, two supply vessels going in with inbetween another cruise ship, the Deutschland of Deilmann Cruises. This is a cruise ship that operates in the same market segment as the Prinsendam but as it is almost completely devoted to the German market it is not really competition as such. The ship is a little bit smaller than our Prinsendam with 23000 tons but comparable in what it does for cruises. What it was doing today however confused all of us including the pilot. It sailed inside, picked up the pilot and swung around and went outside to open waters again. As per our own pilot, the ship was destined for Molde but for that you can sail inside through the fjords and there no need to be in the open waters. Anyway the Deutschland raced out and we raced in. 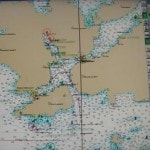 The port of Kristiansund as seen on the electronic chart. The black angled line on top of the ships icon denotes the wind in the port, about 5 knots. The red line was our route in.

Kristiansund is a delightful little place (at least small compared to Bergen) that is tucked away neatly in a deep natural harbor surround by high ridges of rock and it has three entrances of which two are available to regular size shipping. For this port, the Prinsendam is a big ship and the pilot found it quite exciting to sail into through the middle entrance. The quickest way in has been blocked off for large size ships as they have built a bridge over it. Although quite high it is about 6 feet too low for us to get under it, even if we had lowered the Radar mast. (What we do when we go through the Kieler Kanal) so we had to sail around to the 2nd entrance which took about 20 minutes extra but in principle it is an easier way as the dock approach and the departure maneuver are more natural in its evolution. The approach channel is a gap in the rocks of about 500 feet wide and completely built up on both sides with houses, apartments and storage sheds. This must once have been the main harbour. However it looked like the main harbour had been moved more to the North some time ago as that was where we saw all the oil rig suppliers docked. The old harbour where we docked was mainly full with pleasure craft and later in the day one of the Hurtigruten ferries. 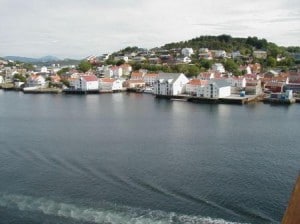 The shore at the opposite side of the ships dock.

As soon as you are through the opening gap there is a nice and wide natural harbor fully surrounded by houses on the hills. We docked completely in down town with the mooring lines almost reaching into the shops. As Kristiansund is located about 13 miles inland, the tide is pressed into ever smaller fjordal passages when going in and that meant that we had a considerable rise and fall during the day, almost 6 feet. The sun tried to peak through the clouds all day and had advanced to partly cloudy by the time we departed. So it was a prefect day and the guests really enjoyed the port. With the town being so near it would even be a nice evening stop, if only the prices ashore were not that high.

On departure we ran into issues with the Hurtigruten ferry called the Nordlys. It is one of a series of small (11000 ton) coastal steamers running between Bergen in the South and Kirkness all the way in the North. They form the life line of many villages along the coast and also carry the mail. Now it is a given that the Royal Mail (Norway is a Kingdom) shall not be delayed or hampered and so I was more then willing to wait for the ship to go first as they were leaving at the same time. But they did not and then when they did they chose to go another way. In the end I could have been out of the harbour before they had even dropped their first line. The pilot put it down to the fact that their regular officers were most likely on summer holiday and the relief crew not fully conversant with a quick departure routine in the port.

However it was a very scenic departure while we sailed out the way we had come in and eventually that brought us back to open sea. Tonight and tomorrow we will follow the coast line of Norway all the way up to the top. Around 7 am we will pass the Arctic Circle and the Cruise Director has some plans to swim over it. (In the ships pool that is)