Remember our visit with the Nieuw Amsterdam about a month ago? We were supposed to dock at the passenger terminal but a day before a Tanker had taken the turn too wide and had damaged one of the dolphins. The Port Authority said that repairs were needed and would be accomplished in about 14 days’ time. So now coming back again with the Westerdam I was expecting that indeed the repairs would have been completed and the terminal dock would be available. Alas no. The floating dock was still not available and we were re-directed to the cargo pier. No doubt to the chagrin of a cargo ship captain whose ship was bumped back to the anchorage.  I am a little bit disappointed in the port people here, as normally they are very much on the ball and things tend to happen more the European way than the Middle American way in terms of time management.  The ship will come back here in the near future so we have high hopes. 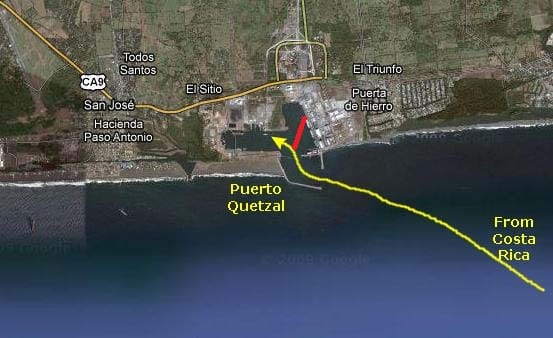 Instead of going left (yellow) we had to curve to the right (red) and dock in the cargo terminal.

In the meantime it is an inconvenience for the guests who are not on tour as they have to be (shuttle) bused from the ship to the cruise terminal and either nose around there or go inland from there. Most of our guests are on tour and the majority of them are on a half day or full day visit to Antigua. This is an old Spanish town further inland and its main claim to fame is the old Colonial buildings which have been preserved here very well. Good enough to be assigned as a UNESCO World heritage site. Then maybe more unusual are the hot springs nearby; although the area is very volcanic so really it should not come as much of a surprise.  All this is about 60 minutes to 90 minutes away from the ship. For the rest there are coffee plantations and chocolate factories that can be visited, hence most guests are on a tour.

The cruise pier, the whole center section floats and thus the gangway height never changes. (Volendam or Zaandam alongside)

We do not like docking at the cargo terminal very much. First of all the pier is fixed so we have to adjust the gangway all the time for the height changes caused by ebb and flood. The cruise ship pier is a pontoon dock which goes up and down with the tides, so the gangway is always under a perfect angle. Secondly there is the ever present chance to get spilled over the decks, whatever the cargo ships on either side are discharging.  If it something like Tapioca or other dried and grounded fish products than it is not fun at all, as apart from the commodity blowing over to our ship, it also does not smell very nice.  Same for fertilizer, the ammonia “perfume” will penetrate to the whole ship if we are not lucky. As far as the other ships were concerned we were quite lucky. No smelly ships today as neighbors and it was wind still so all that was discharged went into the waiting trucks and not over our ship.  Today we had a bulk carrier docked in front of us, with the Belgian registration of Antwerp and they were discharging animal food for the farmers. I could not get out of the local at the gangway what it was, but it was “good for cow and chicken” so I assume that Guatemalan cows and chickens are on the same diet.  Wasn’t there somebody who said that butter, cheese and eggs all came from cows? Maybe we have special local animals here.

Docking at the commercial pier means the captains have to go through a decision making process. Docking with the nose in, or docking with the nose out. Nose out means swinging on arrival and that takes about 30 minutes as there is not much space spare once the ship is perpendicular in the port so it goes slow; but it saves time on departure. Or you can do it vice – versa. Today it was decided to go straight in creating more time to fudge around with the gangway, to get it in a perfect position and height before the first guests were going ashore. So we swung on departure and thus the guests could see the port; first from the starboard side and then from the Port side. Our next port of call is Puerto Chiapas just across the border with Mexico which is a short distance away.

The weather is looking good, same as today, the only concern is the swell, if that is running straight into port, then it reduces the depth of the fairway and that might bring complications.