It is a high speed run from Punta Arenas (or Puntarenas) to Corinto and even with the pedal to the metal we can only just make the 09.00 pilot station time required for a 10 am docking. This is another port where a ship’s captain really sits down and has a deep think about. And again it has to do with current and swell.  The port itself is nicely protected behind a peninsula created by the outflow of several rivers which merge here. So once inside, it is wonderful.

The challenge arises first from the swell. Most of the time there is a long running ocean swell and that swell comes in under a 60 to 70 degree angle with the entrance course to the port. So the ship could roll, could roll considerably. Thus the best option is to keep the stabilizers out. But stabilizers need speed, at least 10 knots, and when we move into the approach course the ship has to start slowing down for the first turn.  There is a maximum speed limit of 8 knots imposed by the authorities.  Thus the ship has to plan to sail with 12 knots into the fairway / buoyed channel and then gradually reduce speed so it can make the turn (where we get the swell on a 90o for a moment) with 10 knots. Then down to 8 knots when it comes behind the first island which acts as a breakwater. From then on speed can be reduced to six knots for the next turn and then to three knots to initiate the turn to the dock. 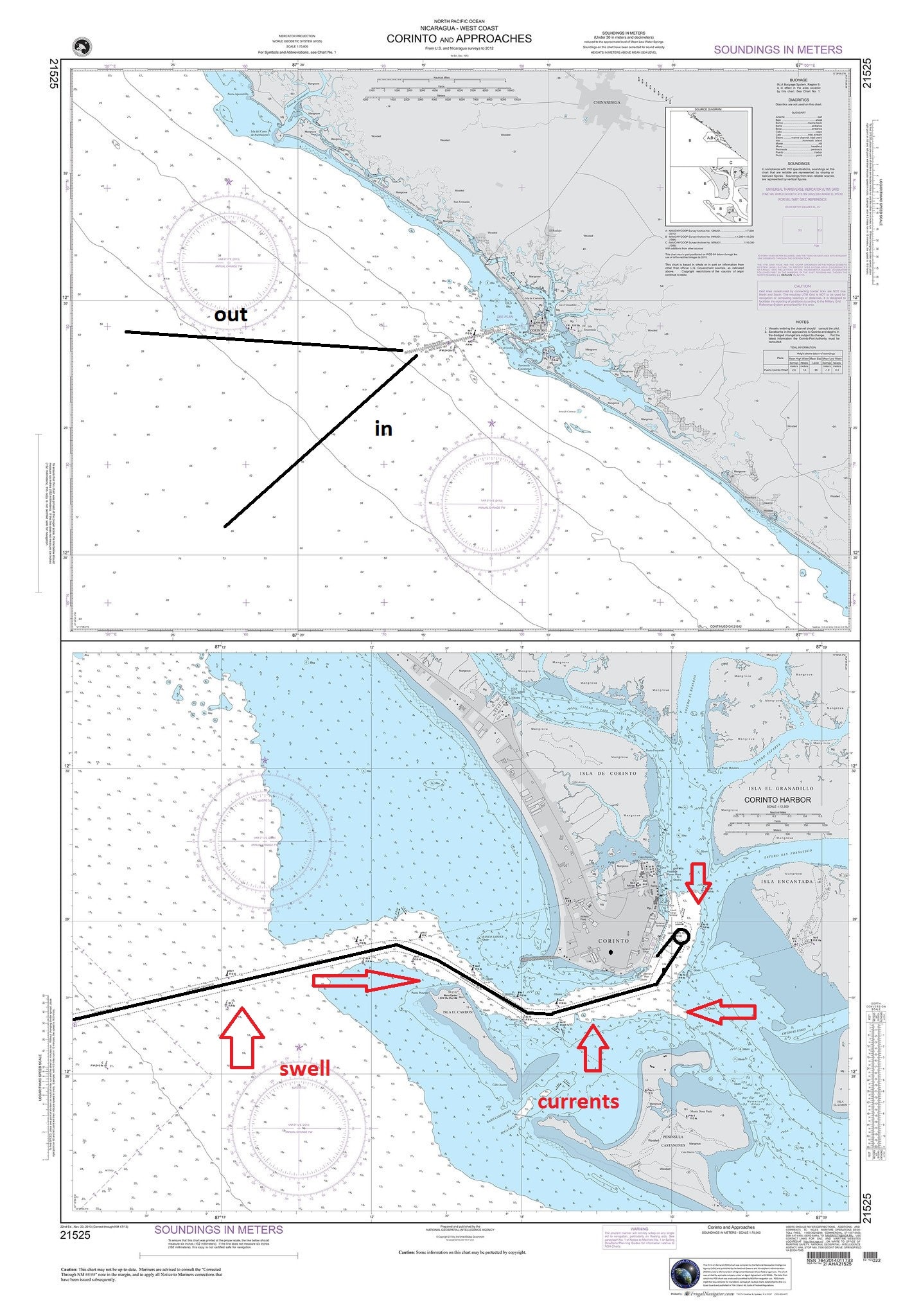 The old -paper – charts in use for Corinto in the good old days.

The 2nd challenge is the current, or better said the currents. The port is subject to an out flowing current caused by the river and a in and out current caused by ebb and flood. The flood is stronger than the river current (unless there has been very heavy rainfall) and that pushes the river current back when the tide comes in. But these two opposing powers continuously battle for supremacy and it is impossible to predict where the influence of the one or the other prevails.  In some ways it makes sense for the ship to come in at full flood tide as then we only have one over ruling current to deal with. But the tides do not follow our cruise brochure so we go in when the schedule dictates.

The current problem really comes into play just around the first corner when leaving the open sea fairway. Now we have just solved the rolling problem by keeping the speed up and the stabilizers out and then focus has to shift to the current. Best way to deal with current is to keep the speed up. The more speed the less drift there is as it diminishes the influence of the current. But we are now in the process of reducing speed from 8 knots to six and then to three knots. So while we are reducing speed we have to keep a close eye on the way the current affects the ship while we are making our 2nd and 3 turn towards the dock. 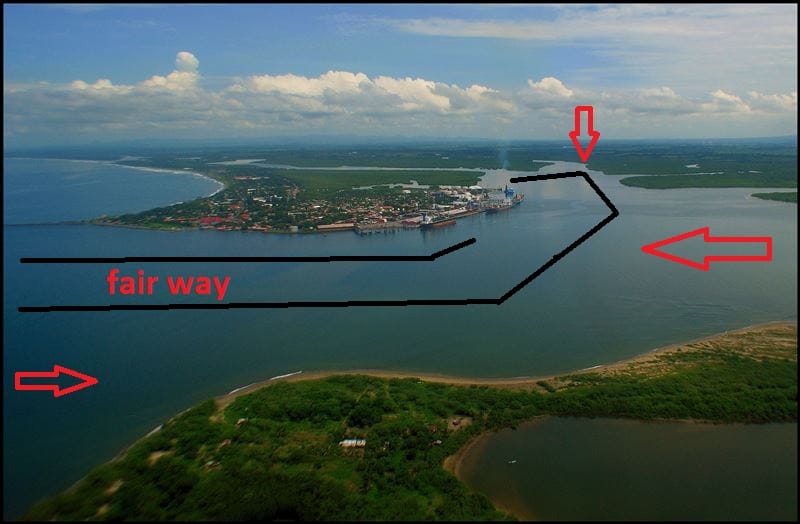 Approximate boundary’s of the deep water in black but it is not as straight as my drawing. Current arrows everywhere.

Normally we solve the problem by hugging either the high side or the low side of the channel based on the best prediction of where the current will be. Once we see the pattern evolving then we can adjust back more towards the center of the channel or stay where we are. Here the pilot boat comes into play, which is darting ahead of the ship and checking the current at each turn just before the ship gets there. The pilot gets the information and then passes it on to the captain with the words “a little bit more to the middle, a little bit more towards the red buoy or a little bit more to the green buoy”. On cruise ships the captain normally sails the ship in and uses the pilot as an adviser with the local information. For cargo ships (who nearly always need tugboats) it is a different matter, they go in and out of port much less often than we do and there is the local language barrier for the orders to the tugboats.

We stayed in Corinto until 1800 hrs. and had a bit of a hazy day with a layer of thin clouds above which was great as it just kept the heat bearable. The rain did not show so the guests could walk around town without being drenched.

Sailing out is a lot easier as you can make speed as soon as you clear the final turn and have the stabilizers do their work. From Corinto it is only a short hop across the border into Guatemala for a visit to Puerto Quetzal. Here we will arrive at 08.00 hrs. and as it is only 120 miles or so to get there, it will be slow sailing tonight. As it is so close the weather should be the same, Sunny, Dry, hot and humid.