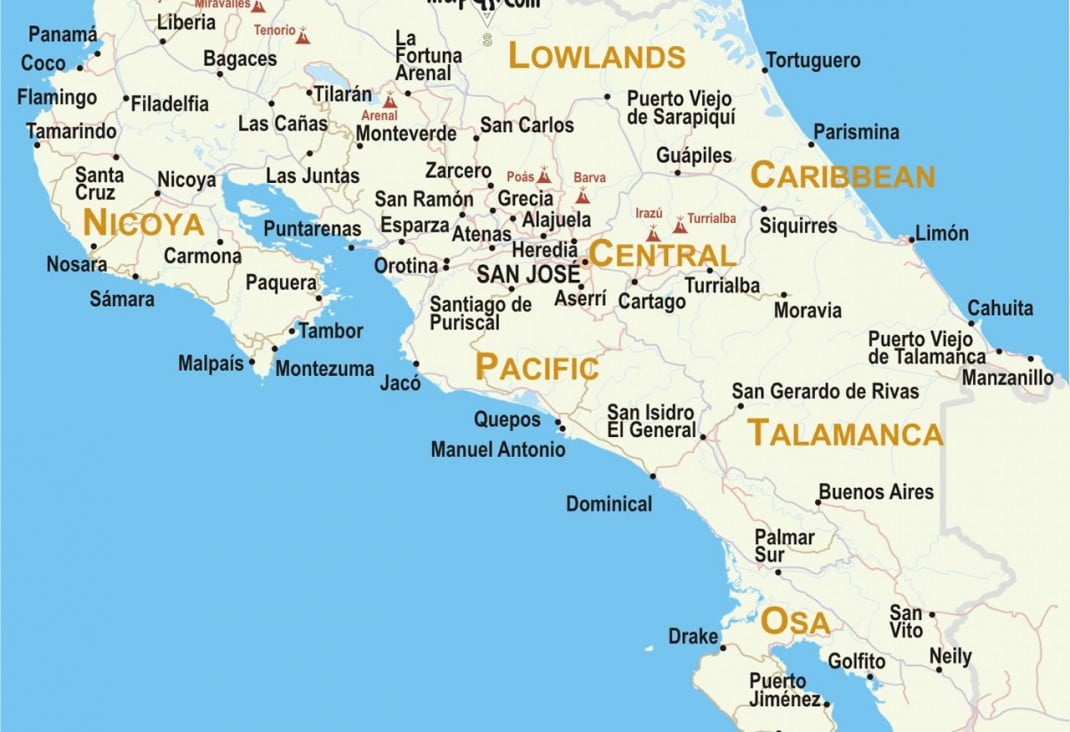 As you can see Puntarenas or Punta Arenas is half way up the Golfo the Nicoya. The current comes in and most of it will follow the east shore. But when it comes to the islands in the middle, the flow is distorted and calculations are of little use. So we look at the buoys and watch the drift.

Slack tide for docking in Punta Arenas was calculated for around 05.30 hrs. and thus the Westerdam was there at the precise moment making sure that as soon as the current fell away, she could go alongside. And then the current did not fall away, it diminished somewhat and thus a safe docking could be made but it needed all the power of the thrusters and the Azipods and the help of a tugboat to accomplish this. One hour later and the flood current was still running.  And that is what fills captains with dread every time they have to go here; you cannot rely on the predictions, not even the ones made by the most experienced pilot.  Get the timing or the estimation of the flow wrong and you have a dent or even worse. Due to the flow of water passing by and going further up the inlet and the option for the water to circle around further up the inlet, the currents are not straight forward in and out as with regular tides.

The water is shallow here so a long pier had to be built. It causes the water / current to flow freely under the pier and that is not nice for docking.

Luckily today we had very little swell and that saved the day. On occasion we could hear a bump under the stern when a low wave got caught under the transom but apart from a gentle sway along the dock, it was a nice and quiet day. It being the time of the season, we were blessed with the occasional rain shower but the positive side of this was that it brought down the temperatures. As with a sunny day it can be very HOT here as there is then normally no wind while the humidity remains high.

Punta Arenas is a small town so for the guests who do not go on an excursion, there is something to look at and maybe pick up a small souvenir. But most of our guests go on shore excursions here and quite a few of them on tours up to the capital of Costa Rica, San Jose, two hours’ drive up the mountain. I was there long time ago and visited the National Museum. I found it most interesting as it was a museum with bits of everything.  Including a six feet KNSM (Dutch company called Royal Boat in English) model of a small passenger ship called the Cottica in an original show case. To my horror they had it standing on a covered Verandah but not in a temperature controlled environment. I wonder if it is still there and survived the tropics. The maritime museum in Amsterdam would have drooled over it. 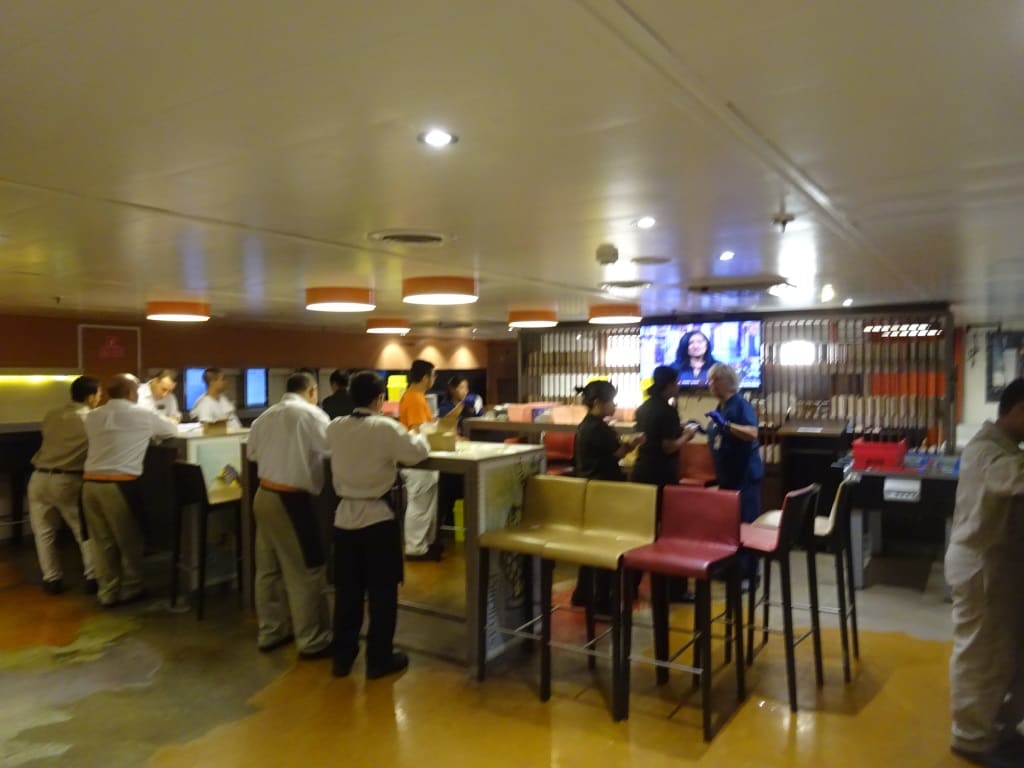 Another thing going on bellows decks. Medical were doing flu shots today. The company strongly encourages all crew to get their yearly shot, so the medical officers are holding several clinics during the cruise to get all 800 crew through.

While the guests were exploring Costa Rica, on board life continued. For those who remained behind were treated to the occasional announcement for testing the P.A system. An unpleasant intrusion but for safety we have to test all the speakers on the outside deck once a year in case we need them during an emergency. We use as many people as possible, by parking each one of them under a speaker so we can keep the number of announcements down but we had to “ding dong” a few times during the day as there are a lot of them. We always find one that has stopped working due to water ingress and then we repair and then have to test again. 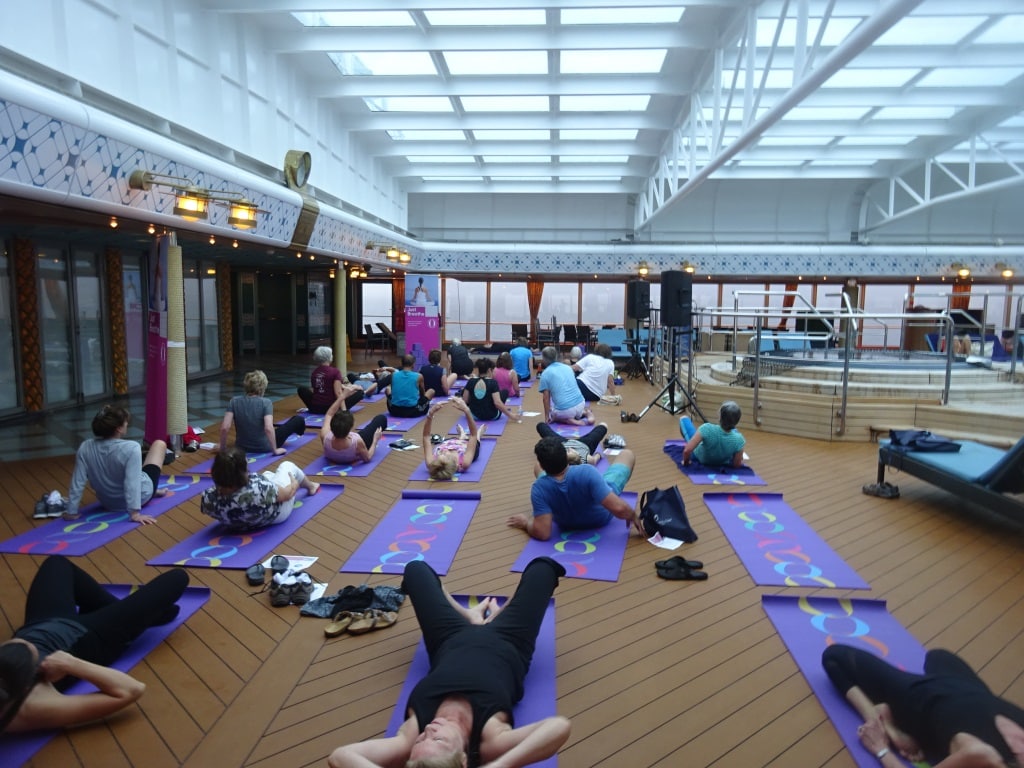 Another activity I see every morning when I go for breakfast, yearly morning yoga. Now the question is, why are there only two guys participating and so many Ladies ??

Then there were more announcements at 10.15 hrs. as Yours Truly was running a Fire drill. This time only the captain was aware of it, as once a month we have to stage an un-expected one as the law makers have recognized that too much routine for the crew is not good. We are human and if we can prepare for a drill, mentally (thinking about a fire scenario in advance) and physically (already on standby for the time scheduled) then you lose your edge. Thus once a month there is an un-expected one and if I am on board then it is really un-expected as nobody knows what I might come up with.

Leaving Punta Arenas was easy to day, the tide was again off schedule but very weak and thus we could just push the ship off the dock and sail out of the bay. Tomorrow we are in Corinto Nicaragua, where we are scheduled to arrive at 10.00 hrs.

Weather for Corinto sunny in the morning rain in the late afternoon. No wind and temperatures around