Today was a peaceful day at sea in the Pacific Ocean, which was also peaceful to a certain extent. Meaning that we did not have a storm.  Whoever decided to call this big ocean Pacific probably did not sail it very much because it not always quiet here. Today we were in a medium state of peacefulness. The wind came out at times with gusts of up to wind force seven but was most of the time content with a wind force 4 and blowing a lot of rain our way.  With the wind came the swell and on occasion we could feel that the Westerdam was a ship and not a hotel.  Even the brown boobies and the starlings that like to drift on the bow wind where having a difficult time of it and were continuously blown off course. They could not find much of a balance between wind and wind uptake and were forever “wobbling” while trying to stay at the bow. It also made it impossible for them to land on the deck and that pleased the Bo ‘sun as on this side of the Panama Canal the sailors are forever cleaning the “memories” of the sit down visits of the birds.

We are on a fairly high speed run to Punta Arenas as our docking has to coincide with slack tide. I have explained before that some deep thinkers built a cruise pier here, perpendicular on the current and with no protection to the surf that rolls in from the ocean. We always have to pray here for a day with little swell so the gangway will not move as the ship is not moving along the dock, caused by being lifted up by the swell. We used to go to Puerta Caldera which is only a cargo terminal but at least you could dock there without swell worries as that port has break water. But we are in the tourist business and thus we go where the T shirts are.

The route we take is simply following the coast at a distance of 12 miles. In the old days we used to sail much closer but now the main traffic zones have been moved off the coast to make it safer and also easier as we are now really looking at highways at sea. Nobody likes a tanker collision near their beaches and certainly not if it is caused by navigators looking for short cuts.  So today we saw land only from a considerable distance but we did see a lot of shipping traffic going to and from the Panama Canal. Not many people realize this but 95% of all freight and cargo that goes around the world goes by ship. Inland there might be some train and truck transport ….. and add to it some air transport, but most of it is by ship.  Because you do not see the ships anymore, the container and tanker ports have been moved away from the down town areas to industrial sites far away, not many people realize how crucial seafarers are to keep the world economy going. It has been calculated that if all seafarers would go on strike at the same time Walmart would not be able to stock 85% of their products within two months’ time. 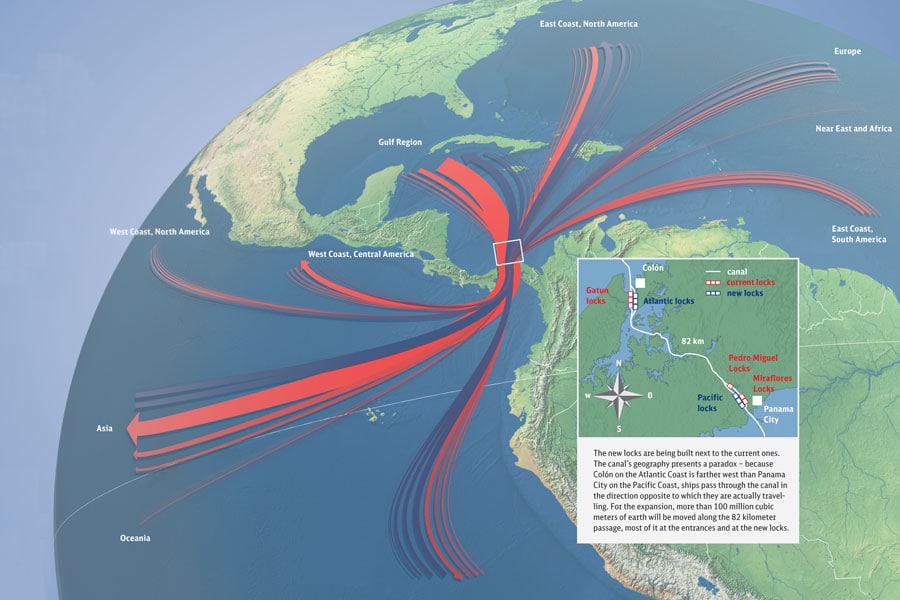 The traffic flow through the Canal. Most ships are on the Trans Pacific run which includes the large container ships. (Photo courtesy unknown, there was nothing in the google)

Thus a Panama Canal cruise is really an optimum way to see how the world’s commerce operates and how ships are involved in this. It makes the Panama Canal and the Suez Canal two very important strategic locations and if anybody would be able to close one of those canals (as they did with the Suez Canal in the 1960’s) then the whole world will be impacted by it. We go through the Canal as a sightseeing excursion and for the company to get their ships up to and from Alaska but most ships have to go through to maintain their schedule and deliver the products that they carry on time. And that goes by clock work.  Now it is possible that from the moment a TV is being assembled in China to the moment it stands in a sitting room in a house in Finland, the period of time in between is not more than six weeks.

Tomorrow we are in Punta Arenas, where the weather is expected to be very Costa Rican, a bit of everything with quite a bit of rain in between. Luckily not too much wind is expected, unless we get a thunder storm, so it will be damp, muggy, warm and very likely wet.