Yesterday in Malaga all the movers and shakers of our company left the ship, to return to Seattle and their daily chores, and the crew continued with their focus on making this a memorable maiden voyage or premiere cruise as marketing calls it. On board are 2019 guests and 1026 crew and that is about 40 crew over the regular Table of Personnel as there is still extra support on board to fine tune things and carry out last minute enhancements.  I think some of them are leaving tomorrow and the rest in Ft. Lauderdale which will include Yours Truly as nobody likes me around during Christmas as I cause drills to happen instead of Christmas songs. 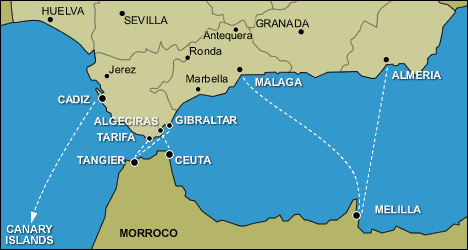 Various ferry crossing while going through the Straits.

The bridge reported that things were very quiet in the Straits of Gibraltar last night with just the regular ferry traffic crossing the Straits. Ferries are normally easy to deal with. You know where they are going, you know they do not like to change course as that costs time, so if you yourself change course timely, even if it is not really you who has to, then you seldom have a problem. They are happy that they can keep their time table and yourself have made your own life a lot easier just by being a little bit proactive.

To keep those in check who have not learned this lesson yet, there are Vessel Traffic Separation Zones, our highways at seas which separate east and west bound traffic, and there is Tarifa traffic. This is a calling in and monitoring station which keeps an eye on all the traffic in the Straits and is located in the Spanish port of Tarifa. For the linguists among us, Tarifa gave us the word tariff, as it was a major tax collecting point in the entrance to the Mediterranean in the good old days. 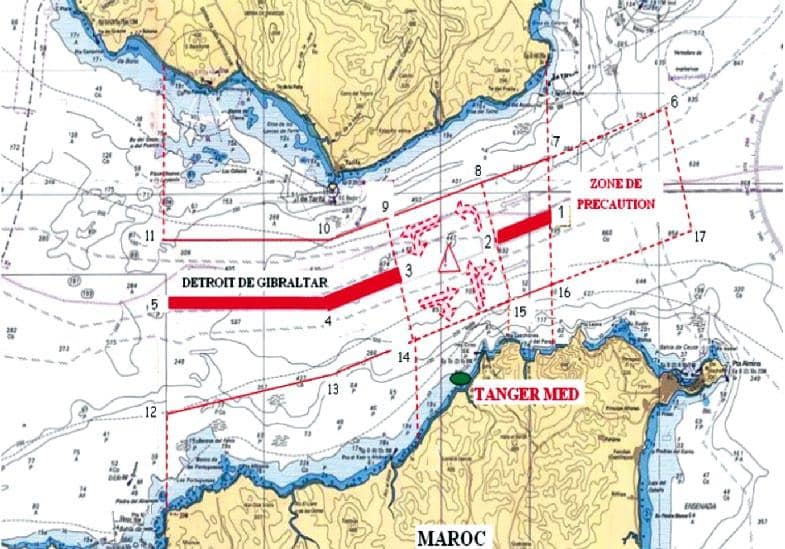 The ships highways at sea. Inbound stays on the African side, outbound on the European side.

To “change course even when you do not have to” is also sort of the company’s safety philosophy and I hope also of the rest of the cruise industry. We carry humans on board and it is then all about minimizing risk. We do that with the ships itself and we also train our tender drivers this mantra and that is one of the reasons you see our tenders sometimes waiting for traffic while they really do not have to do that, as they have the right of way. But better safe than sorry. When our tender drivers are out there with their valuable loads of guests, the mantra goes:

Stop or turn away for: canoes, sailing boats, larger ships, tugboats, basically for anything of which you are not certain what they are going to do or who are much less maneuverable then you are. When you meet one of the tenders of your own ship, follow the Rules of the Road as you know that your colleague will do the same. 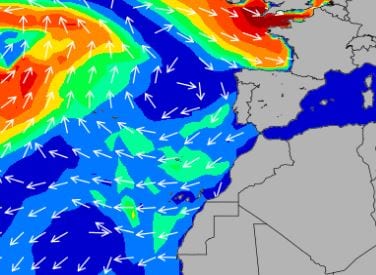 As you can see very nasty weather on the North Atlantic but we had to sail through a bit of that green stuff as we are on a south westerly course. The small wave field dissolved  late morning

Although I had predicted smooth seas, it did not turn out completely that way. They have a whopper of a storm in Western Europe at the moment: Schiphol / Amsterdam airport was closed for a while and the swell of that storm came a bit further south than the simulation of yesterday predicted. So instead of having 10 feet swell, what we normally do not notice, it just touched the 14 feet and that made the Nieuw Statendam move just a little. Not much but just enough to feel that she is a ship and not an apartment building. I do not think that it affected many guests, as at 07.00 hrs. this morning, when I went for breakfast the Lido was already in full swing.

When you make a North Atlantic crossing the captain can basically select out of three options: The straight line over the Globe, which is in reality a curved line as the World is round. This is called a Great Circle route and is the shortest as it follows the contours of the earth. Then you can follow the straight line in the chart, this is called a Rhumb line but it is a longer route. It is a number of miles longer as a flat chart can never give the same surface as a globe, due to the way the globe’s features are projected on this piece of paper. Because of the earth curvature it goes further south and it keeps you away further away from the bad weather of the North North Atlantic. Then the 3rd option is to follow the “flat water” route, the route advised by meteorologists. That route will take you much further to the South, sometimes very far to the south and is much longer. So the Captain has to decide what is best for the crossing. Smooth Seas where possible, low fuel consumption where possible, arrival on time for certain. But that is something for after Funchal.

We are now on a Rhumb line = straight line to Madeira and Funchal. Trying to do a Great Circle here would not bring any gains, as the distance it too short. So we head straight for Madeira. This island belongs with four other islands to Portugal but is located far to the south of the mother land; hence we can make this crossing with nice weather.

Weather for Funchal 67oF / 19oC, mainly Sunny and no wind, nor rain expected. Tomorrow we will look at the rest of the crossing.