Last night we went an hour back so we are now on English time but also on Portuguese time. Although Madeira is really just in another time zone, it is kept in the same time zone as the mother country. Hence the sun did not rise very early this morning when the ship arrived. But sailing into Funchal in the dark is very nice as well, as the houses of the town are clustered around the port and go all the way up the mountain. At night they might switch most of the lights off, but Madeirans also have breakfast and then the lights in the houses come on again. Plus we had the whole day to admire Funchal in daylight anyway.

A Google earth view of the port from a day with two cruise ships inside. One looks like a Princess ship (shopping trolley Class) and the other one a Celebrity ship. We were docked all the way in with our nose almost at the bus stop. (Blue square) The Ex Westerdam was across at the berth where it says CR7.

Funchal is a nice port and a sheltered port from most of the North Atlantic weather as the large mountain range shields it from what blows out there. Only when the storm comes too much to the South or South-South –West then the bad weather reaches into the port and ships cannot get in. In my whole career I think I had to cancel only once as there was too much swell running into the port, to stay safely alongside. Even when docked all the way in, there where we are now.  Funchal throws a very good New Year’s Eve Fireworks party and sometimes 7 or 8 cruise ships (mainly from England) then gather here for the event. And then it is keeping fingers crossed that there is no storm ranging which prohibits the fireworks to go off and/or the ships to remain drifting in position.

While I was figuring out how to stop a fire in the Main Galley by pushing shut down buttons in the right sequence. I saw something white coming by and was then delighted to see the Marella Dream in port. Why because she is my old ship the Westerdam (II) which we had in service from 1988 to 2004. Built as the Homeric for Home Lines, she came to Holland America in 1988 when HAL bought Home Lines out. That company had two ships, the Homeric and Atlantic. The Homeric was a beautiful ship so we kept it, the Atlantic was of less interest as it was not built that well and hence the company chartered it out and later sold it. The last thing I heard about her was that she lay half sunk in an Indian port. 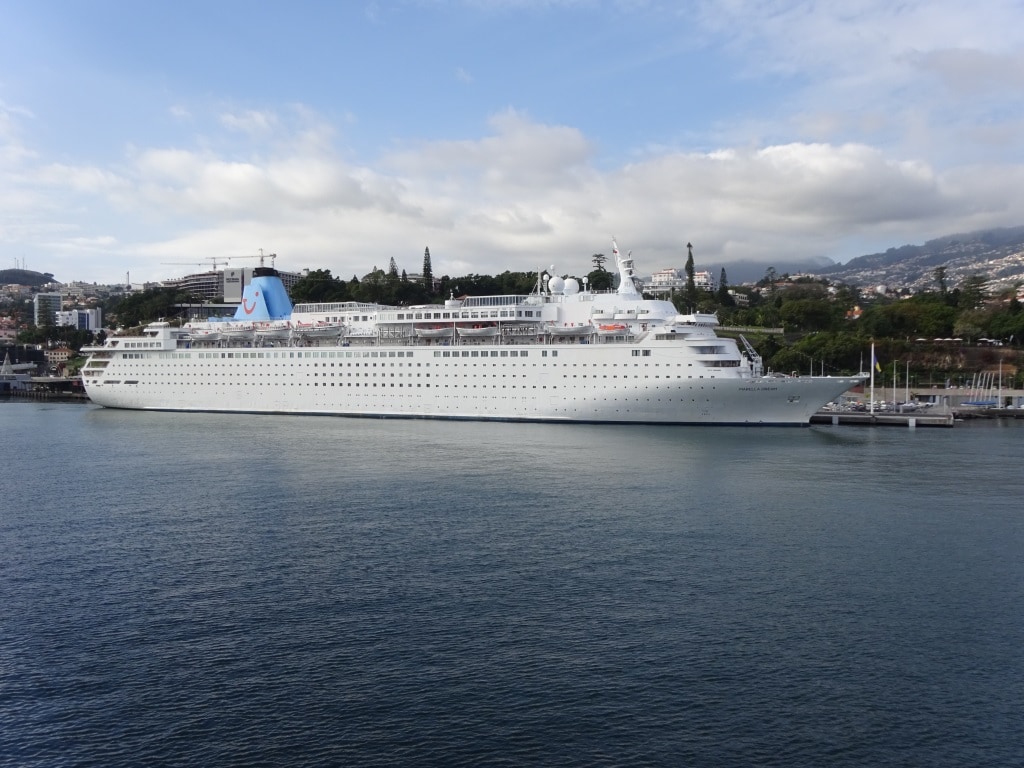 I was 2nd Sr. Officer on the Westerdam (II) when we returned to her builder in Papenburg Germany for the stretch. You can easily see the added section as the windows — in the middle — are larger.

When we bought the Homeric we also found out that the ship has been intended to be bigger but as she had to fit in Front Street Hamilton, Bermuda, that did not happen. So Holland America grabbed the change to have her stretched as we were battling Carnival at that time and needed to be as cost effective as we could, and larger ships give economies of scale. While the Homeric with 42000 tons was already the biggest ship Holland America ever had; after the 100 feet stretch she went up to 52000 tons and remained the biggest ship in the fleet until the arrival of the S class. She was very well built and by use very well maintained, hence she is still out there. Holland America handed her over to Costa where she became the Costa Europa and then she ended up with Tui / Thomson as a package holiday ship for the English market, called the Thomson Dream. Here she was re-united with her former fleet mates the Noordam (III) and the Nieuw Amsterdam (III) who had also gone into Thomson charter. Last year I suddenly saw her in Greece as the Celestial Elysius but now she is back under the name Marella Dream as the Thomson Company rebranded itself under the Marella name. 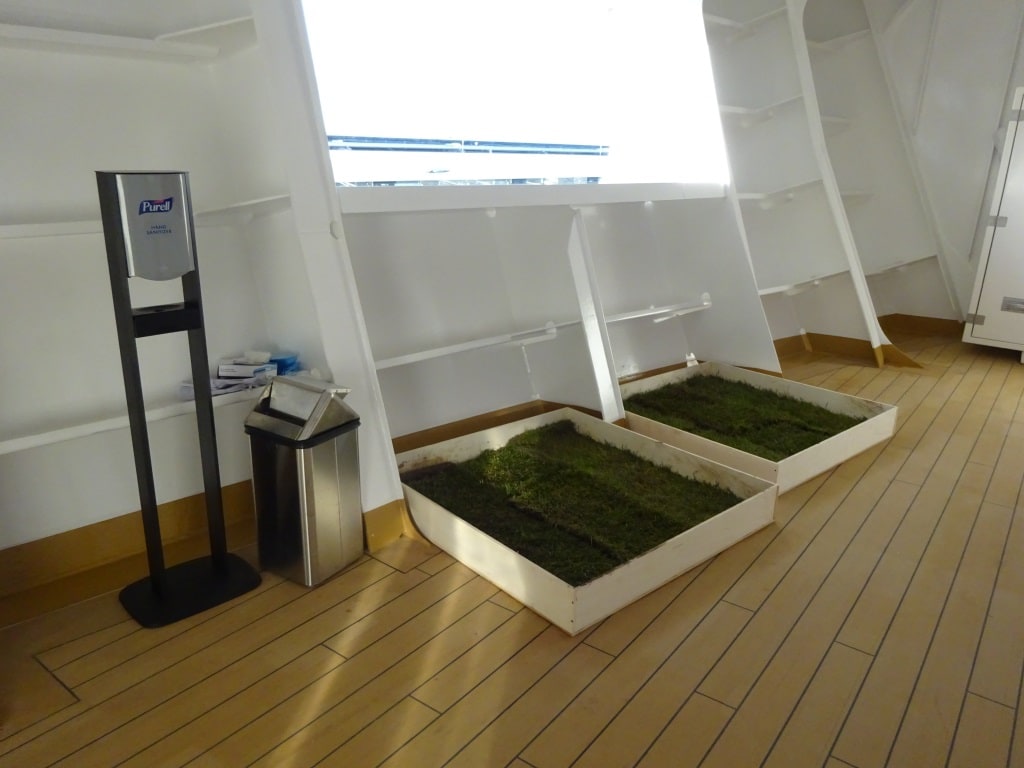 While out on the deck, I also noticed the grass boxes for our Guide and Service dogs. I believe we have five on board for this crossing, including Tosca, the Dutch Blind Guide dog, who is well on her way to go over 400 days.  Normally the carpenter makes one big box, now we have two, so I am wondering if this is a HIS and HER box.  Would not be amazed as our crew does have a good sense of humor.

We sailed right on the dot of 17.00 hrs. and started our 8 day crossing to Fort Lauderdale. Of most interest is of course the “wobbly-ness” of the ocean. For the first 48 hrs.it looks as if we have good smooth seas with swell less than 10 feet. But the computer model forecasts another storm being generated at Cape Hatteras. That storm will not reach us but with the forecast track, we might just skirt the 14 feet swell boundary and that we could feel. But it will all depend on the angle of the waves to how the stabilizers can deal with it.