We made a good start of the crossing, there is hardly any wind and only a very low swell running of about 6 -8 feet in height, and that swell got slightly less during the day as well. We have partly cloudy skies with a mix of Cumulus and stratus clouds. They indicate that far away things are not exactly happy, but here all is well in the world. Madeira is at a latitude that is slightly higher than Fort Lauderdale and thus we are sailing on a course of 262o which is just 8 degrees less than due west.  As we have 8 sea days to play with the ship is sailing along at a sedate speed of 16 knots and that gives everybody a comfortable ride.  Cruising is often about seeing the world but lots of cruise guests also enjoy the sea days when the ship becomes a destination in itself. The Nieuw Statendam has a lot to offer so I do not think that people will be bored while on board. One of our old captains used to say: “Doing Nothing is also doing Something” and I saw a lot of our guests doing exactly that. 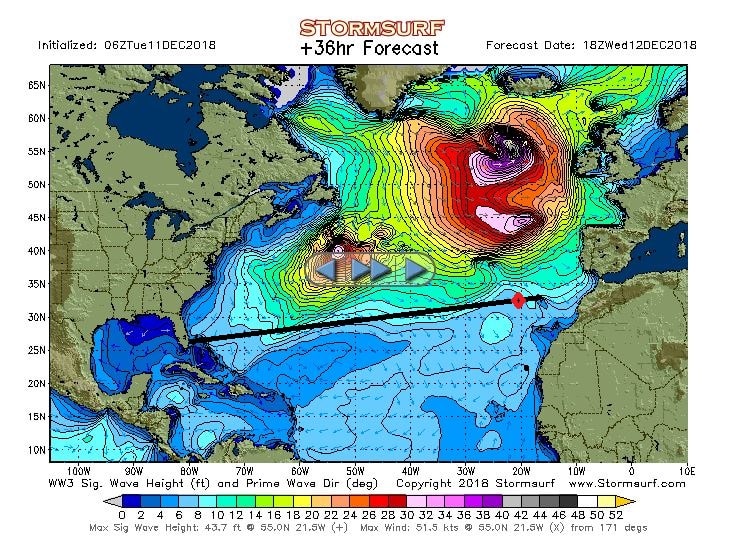 Nasty things on the North Atlantic. This Is the prediction for the next 24 hrs. plus. As long as we stay out of the light green, we will have a smooth crossing. (Courtesy: www.Stormsurf.com)

I am doing my best to help out so I gave a little lecture about the High Days of Trans-Atlantic Travel which in my opinion was between 1900 and 1960 when the airplane became dominant on the North Atlantic. (In 1958 as many people traveled by plane as by ship and by 1959 the plane had won the battle). Part of that Heyday was the push by governments to have their national predominant ships on the North Atlantic. The fastest, the most luxurious, often statements of what economic capability a country had. The way the ships were built, the lavishness of the interiors full with national art and the way they were run, was all about National Pride. Great Britain, France, Italy and Germany were the countries battling it out. The Blue Riband, denoting the fastest ship on the North Atlantic went from ship to ship and thus from country to country. Some company’s were proud to fly it (French Line) and some company’s (Cunard) officially ignored its existence but kept building fast ships nevertheless. 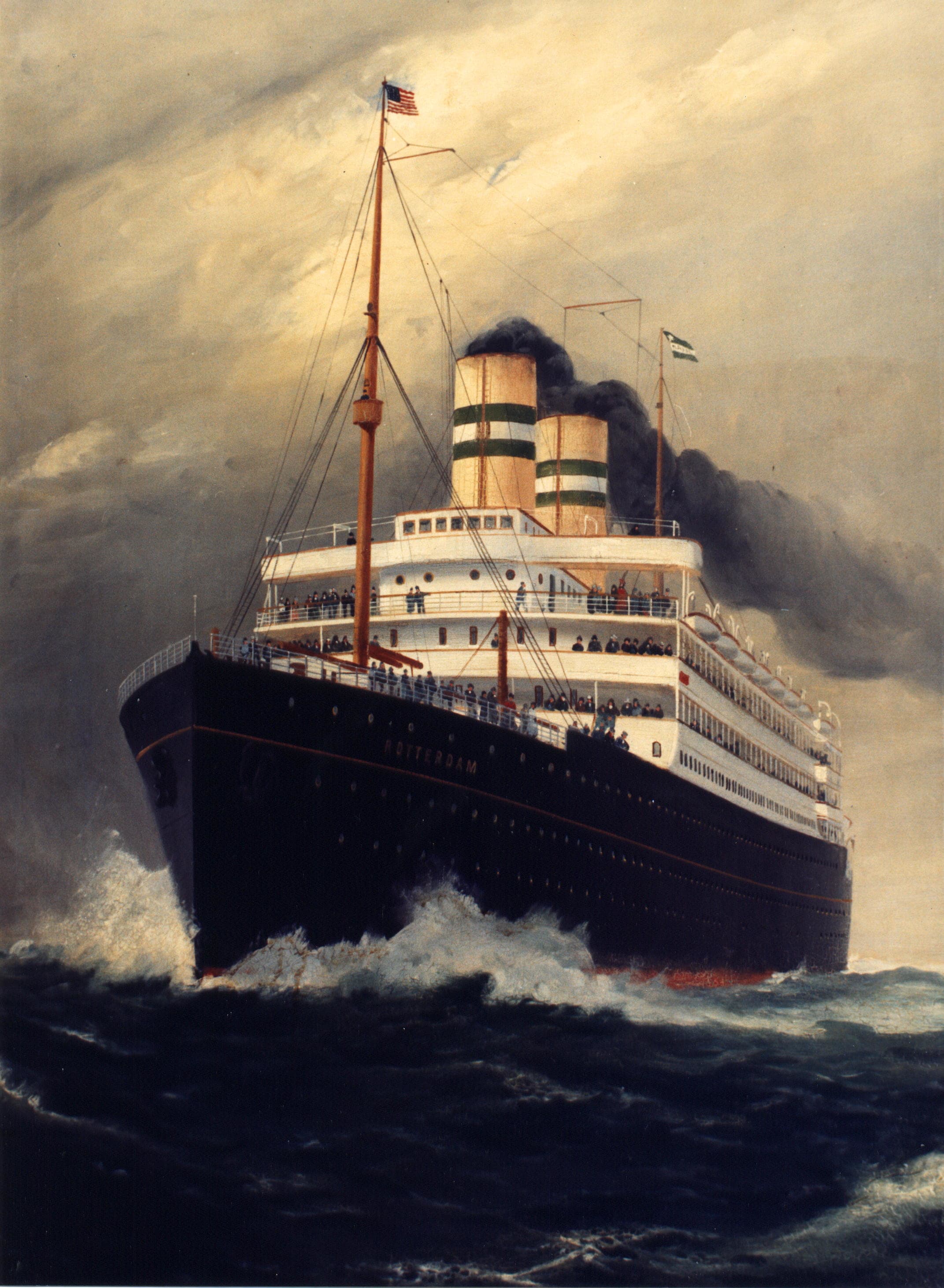 This is one of our big ships, the ss Rotterdam (IV) from 1908. This painting is now in the archives of the Rotterdam Maritime Museum. (Photo courtesy Schaart Photographers)

Holland America was never much involved with this. The Netherlands was a small country in Europe and it’s size as an Empire came from the Far East and the Caribbean, not from its location in Europe. Still we built big and luxurious ships but the ships had to pay for themselves as the Dutch Government was not throwing money away just for the fun of showing off. So while the Blue Riband might bring a lot of attention, it often needed a lot of money from the national government to keep these ships going as they burnt excessive amounts of coal and later fuel. 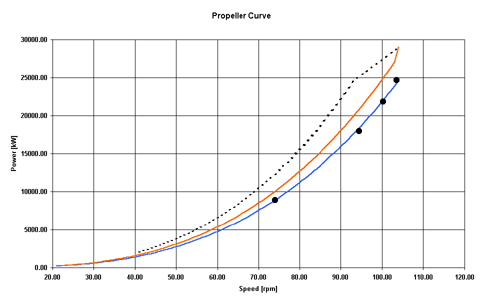 The exponential increase in power needed to make a ship go faster and faster.

Ships speed versus power needed is not a straight increase, but is a curve that gets steeper and steeper the fast you want to go. Our Nieuw Statendam does 16 knots on 2 engines, but would need all 4 engines to reach the 22.5 – 23 knots she is rated for, so two more engines of the same size to gain 6 more knots in speed. Hence the Old Ocean Liners needed 160,000 horsepower to get to the Blue Riband speed of 30 to 35 knots.

The final Blue Riband holder, the ss United States, was rumored to be able to go over 40 knots and her boilers could produce 240,000 Hp.  That gave a fuel bill of over an 1000 tons a day. That ship was 54000 tons in volume while your Nieuw Statendam is 99,000 tons and runs on a daily consumption in the region of 80 to 90 tons depending on the number of engines going. 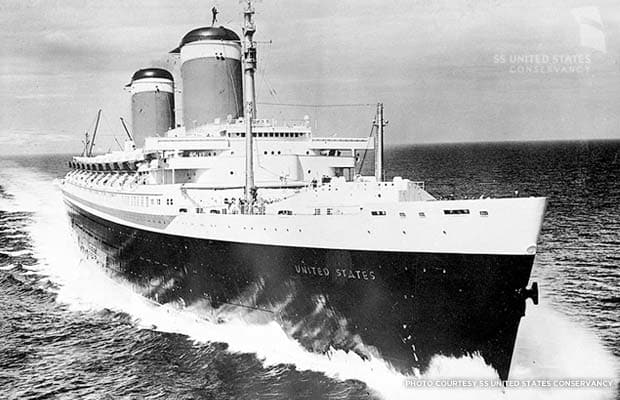 The ss United States. The last true holder of the North Atlantic Speed record. She is still out there. Docked in Pennsylvania and maybe she will be used for something again in the future.

The only way to reduce the need for that power is to reduce the resistance in the water and hence the invention of  hydrofoils, catamarans and related ships. So since the United States, three of those boats have gone faster over the North Atlantic and claimed the blue Riband. But I do not agree with that as the quest for North Atlantic speed was in conjunction with carrying paying passengers and mail across the pond and not just for going for the record with a modified speed boat which would never commercially operate on that service.

This is currently the fastest commercial craft that sailed the North Atlantic. But is is not an ocean liner and she never was employed there as such.

But it is all relative. The ss United States could have done Funchal to Fort Lauderdale in just over 3 days, while we are going to take 8. But then we are not in a hurry as this is a cruise and not a Bus service to get to the next business meeting on time. As long we get their by the 19th. it is all fine by me, as I have a flight home that day.