It is always hard to predict the wind and the current. As a rule of thumb the current is stronger when there is a lot of wind in the same direction as the wind gives the water an extra push. However the current can be even stronger when there is not much wind, because something else, somewhere else is pushing the water masses faster than normal. We did not have that much wind yesterday and today but the current in the open waters above San Juan was very strong and against the ship. Not nice as the engines have to push harder to maintain the speed and that costs extra fuel.

When we entered San Juan the current reversed instead of pushing to the West it set the ship to the East. But that can be expected if the wind is less strong than normal. As I blogged last week one of my class would be allowed this morning to sail the ship into port (while standing hand in hand with the captain of course) and the captain had chosen one of my lady officers as she had produced the best passage plan for the approach. The others were good as well but she had also spent extra time on the instruments on the bridge and that gave an extra plus. So this morning she lined up the ship into the leading lights and sailed into the port with the captain approving each order before it was executed.  She caught the different current at once and adjusted the course exactly at the right moment.  It was a Picture Postcard Perfect Arrival. Very nicely done. The men in the team were showing their strong side by the 3 of them doing the work of 8 sailors on arrival. So the team split up to day. Brain and Brawn.

As this is the 3rd and last week of the training course there is more and more practical things to do. So I have them take over as much as possible from the sailors. It is my point of view that you can only correct people if you can do it better yourself.   One of those things is life raft exchange. All our life rafts have to be inspected once a year. This means they go shore side, are taken out of their container, inflated and inspected and the entire survival inventory inside is checked and if necessary renewed.   While our rafts are going ashore, we receive “loaners” on board until we get ours back again. To switch those rafts is a cumbersome process and takes a lot of time and effort. The rafts are heavy, are located in an awkward location at the edge of the ship and are stacked two high. How to do this properly and safely is something you have to learn; So move in the Dream Team.

All Ft. Lauderdale morning and afternoon the five of them were pulling out the rafts, lowering them to the dock side and getting the replacements back up again. Normally this is done by 3 sailors and takes all day, now there are 8 in total available and it was done in a much shorter time, even while there was no experience. On their first ship it could be more or less their first job off the bridge as the whole fleet is going through this life raft exchange program around the same time. 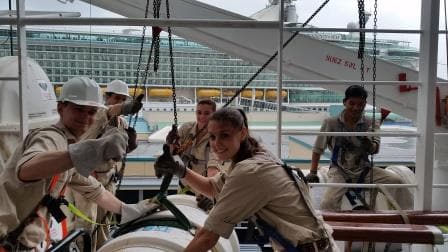 Lifting the heavy containers requires careful maneuvring and the use of block and tackle. The men are still wearing helmets as they were going to pull the container under the crane. Close to the side of the ship a safety harnass is required for everybody. (Photo courtesy 2nd officer Martijn Schultz)

Today in San Juan we were docked together with the Aida Vita which we see every 14 days, the Carnival Breeze which does almost the same cruise as we do but has Miami as a home port and the Celebrity Silhouette which we see every 14 days as well.  The Aida is always in early but the Westerdam, Carnival and Celebrity follow each other in with about 2 hours in between in the early afternoon.  That makes life easy as there is no pushing and shoving at the pilot station.  We went down with one of the ships tenders for some fun and games, called maneuvering.   We can have a later arrival as we stay until 11 pm. for our evening call. San Juan is a perfect place for this as the old town is right across from the ships dock.

Tomorrow we are in St. Thomas again and as this is a 7 day cruise it will be the same time, the same dock, the same location and the same weather. (And the same shops) Only our guests will mostly be different although we have about 20 back to back guests on board who decided to go around a second time.