The weather is holding and today was a real nice “Caribbean” day. Although we are not in the Caribbean yet but half way between the Bahamas and San Juan.  We were in port again with the Carnival Breeze which arrived at 09.00 hrs. For our operations this is a real inconvenient time as the pier is closed for all traffic for about 20 minutes. It is not safe to be on the dock when the mooring lines are coming out and are being pulled tight and thus the gates on the shore side are closed and the ships gangway as well. 09.00 is for us a prime time for guests going ashore and when we stop the flow – even with announcements made –  everybody still tries to come down the staircases and in the elevators  and this can clog things up considerably. So we always hope it can be avoided but we all have our own operating schedule. We just hope that the linesmen will be working fast and the delay is only of a short duration.

I was requested today to give training to the engine crew about Enclosed Space Entry. This basically means “getting into a tank and getting out again; alive, well and safe”. As this was also of interest for the class it was nice to combine the two.

Next door to us in the Hudson Room (I was in the Half Moon Room) were two shore side trainers with a large group of crew for Crisis Management Training. We train on board ourselves in how to handle crowds as well but we are also required to have 5 year refresher courses and they have to be conducted by specially accredited people from the shore side. Holland America is using a legend in the industry. Beau Altman. You might not know his name but everybody who has ever flown has come across what he invented a long time ago.  He is the man who came up with the idea of having no text in the emergency instructions in the seat bag in front of you in the airplane but only drawings and pictograms. It completely took away the language problem and any confusing way of writing which might occur in a text manual. The idea was adopted by the airline industry and is now standard on every airplane. You would think that after such an invention he could have retired and live off the royalties but he is still out there and we are the better for it. 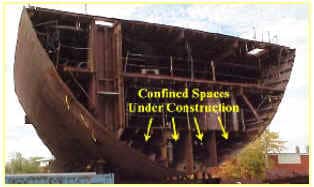 Bottom tanks which are not opened often tend to be very low on oxygen as the rusting process consumes oygen.

But for our group of engineers, cadets, fireman greasers, wipers and day service machinists it was enclosed space. It is the number one killer in engine room work and probably also beyond. The industry has strong rules of how to go about entering a confined space in a safe way and Holland America has set its standards even higher with making the regulations even more severe. The problem ashore and at sea is adhering to those complex regulations. Things are forgotten and or not executed due to complacency or sometimes laziness. The main danger of an enclosed space is lack of oxygen; and as you cannot see this gas (or the lack of it) people tend to forget about the danger. If you do not get enough oxygen, you do not notice it yourself very much as you get a bit drowsy and then loose consciousness. It does not hurt, you just fade away.  Very dangerous. 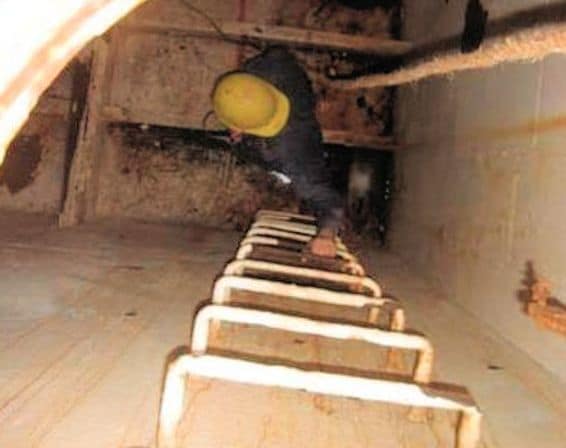 This might not be so handy. Alone entering the tank and apart from a helmet I do not see much equipment to protect this person.

We have forms and checklists but nothing beats understanding the issues and training the routines.  It mainly goes as follows: Once a tank is safe to enter (tested for safe air with sufficient oxygen) an Entry Permit (= Checklist) is filled out and signed. The team involved is briefed about what needs to be done, who does it, who does what and how do you get out safely again. 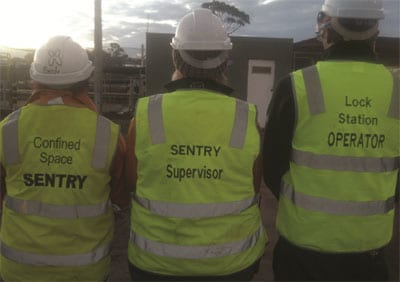 Titles vary in the world but the purpose of supervising personnel remains the same. This is Australia.

The Entrant (s) = the person (s) who will be working inside.

The Attendant = the person on watch outside who monitors who goes in/out and keeps constant contact.

The Entry Supervisor = the person overseeing the Entrant and the Attendant.

The Responsible Officer = the officer in charge of the operation

Each has a duty, each is responsible for part of the operation and the whole layered setup has one goal. The crewmember who went in, will come out again in the same way he/she went in.

Today we did an hour long theoretical material and a table top. In two days’ time we will do a practical and for that I will build one of my special mockups.

Tomorrow we are in San Juan were we hope to arrive at the pilot station at 10.45 am and to be docked at noon time. Weather is expected to be hot and balmy and if the rainclouds drift over from the Rain forest we will have an occasional shower was well.