I sometimes think that the guests do not always appreciate how many hours the officers on the bridge and in the engine room make while on these Norwegian Cruises. Hotel can normally continue their shift work day in day out but for upstairs and downstairs it all depends on where we are sailing. And with the Koningsdam on the 7 day run it is really hitting hard. This morning the captain was on the bridge by 02.15 and did not see his bed until 07.00 hrs. when the ship docked. Then by 10 am he is supposed to be around again to meet with people who are, or who think that they are, very important and then in the afternoon by 15.30 (Guest boatdrill) it starts all over again and then it will last until 22.00 hrs. before the Koningsdam is safely back in deep sea again. Tomorrow’s sea day sees all the social stuff and then it is back to early standby’s as the Koningsdam goes deep into the fjords. Wonderful cruises and great to do but after 2 months every Captain dreams about a Atlantic crossing with 6 or 7 peaceful sea days in a row. (Most captains also dream of sitting at home in the garden with a Heineken on the table………. but for that you do not have to be a captain). 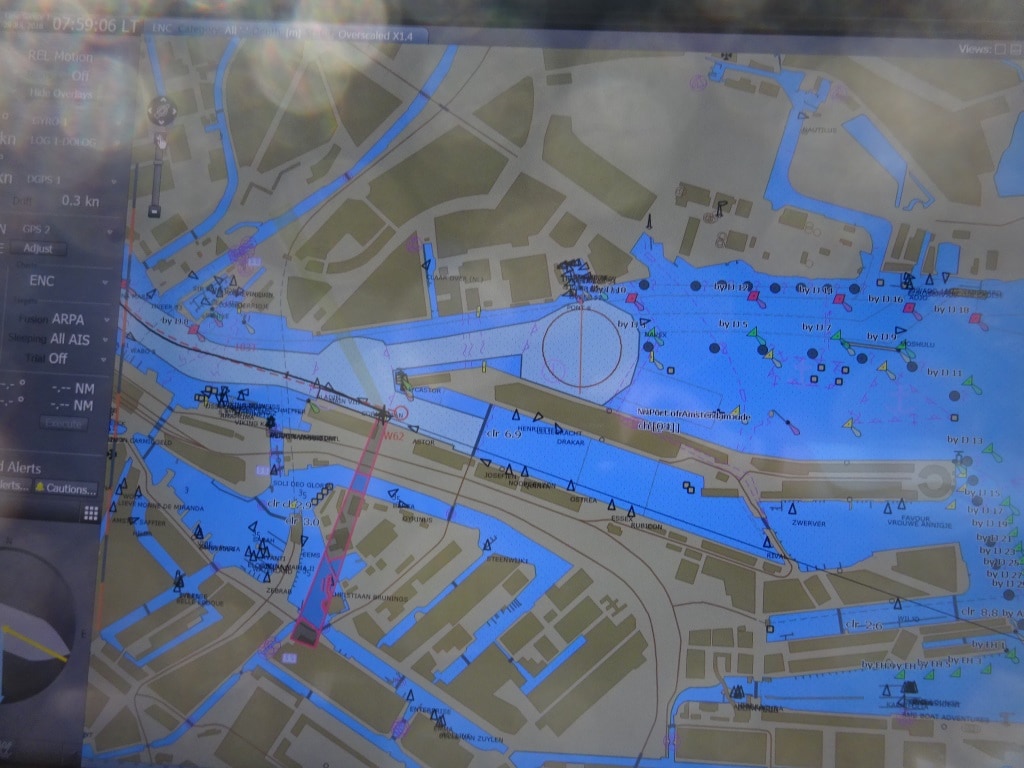 The port of Amsterdam as seen on the electronic chart. The cruise terminal is indicated by the purple beam and the large turning circle is to the right. All the black triangles indicate ships that have an AIS transponder. These are not compulsory for small ships but many skippers who sail around Amsterdam in the fog have them so at least the are seen on the radar, if not heard.

But we docked safely again this morning, joined a little bit later by the little Astor witch would fit 5 times inside the Koningsdam and sat as a small tugboat under our bow. But smaller means also visiting smaller ports and that is also good fun. 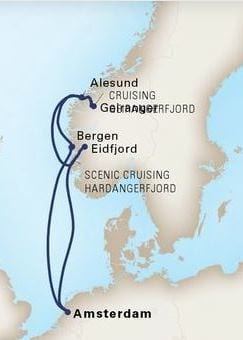 Today we said goodbye to nearly all our 2900 guests. The regular ships capacity is 2500 but it was school vacation time so there were about 400 younger people on board varying from 2 months to 17 years and the ship was heaving. Still with all the ports, the ship was never over crowded or in a chaos. This cruise we have a full house again but I do not know the total numbers yet.  We will call at Eidfjord, Alesund, Geiranger in Geiranger fjord and Bergen. Four ports in seven days. With the long sail ins and outs and Amsterdam being a day sailing away this is as much as you can press into a seven day cruise.

We docked today starboard side alongside for propeller cleaning but also for hull cleaning. While sailing, algae sets itself onto the hull, turning the red under water ship into an emerald green one and that growth slows the ship down by about 10%. The Koningsdam will get a new sort of paint applied in December which will stop most of this growth but as December is still far away, the company has decided to clean the hull. We get the costs back in one or two cruises due to less fuel consumption, making a sound investment. For this purpose a large barge comes alongside and lowers a scrubber machine in the water which (with magnets) locks onto the hull and then travels from bow to stern scrubbing all the growth off. This machine is under water accompanied by one or two divers who steer it where it has to go. Removing this growth from the ship and then letting go into the water does not affect the local environment as the growth is already dead, so carries no toxics and will just decompose. 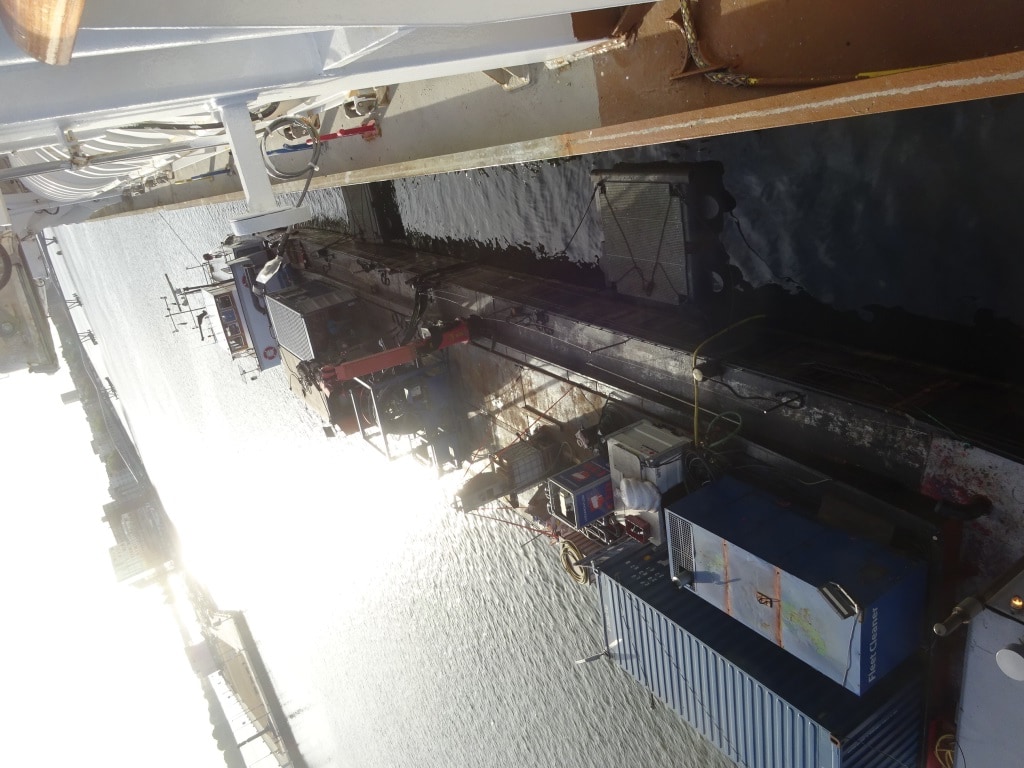 The river barge which is a diving headquarters.  The cables for the scrubbing machine are kept on a large drum and pay in an out depending on where the scrubber is located.

They come by barge as most transport and service company’s use self propelled barges as it works a lot easier and you never have any parking problems. Hence we had apart from this barge, a fuel barge, a lub oil barge and also a water barge alongside. The latter was here to top the ship up as we make our own water but it is more cost effective to load from shore in port than to run our own onboard plants. Hotel supplies still come by truck as many of the distribution centers are not near water.

We will sail this evening around 17.00 hrs. and because we docked nose in, we have to sail first south in the Amsterdam – Rhine Canal to the large turning circle before we can head for open sea. The turning circle opposite the cruise terminal can handle ships up to 225 meters but then it gets tight, so they arranged for a bigger one a little further down.

Today the weather was considerably cooler due to a weather system with thunder storms coming over from South England. That is going north and we will follow it. So we might have one day with a bit of rain somewhere, depending on when the Koningsdam catches up with the system but then the Norwegian heatwave should return. 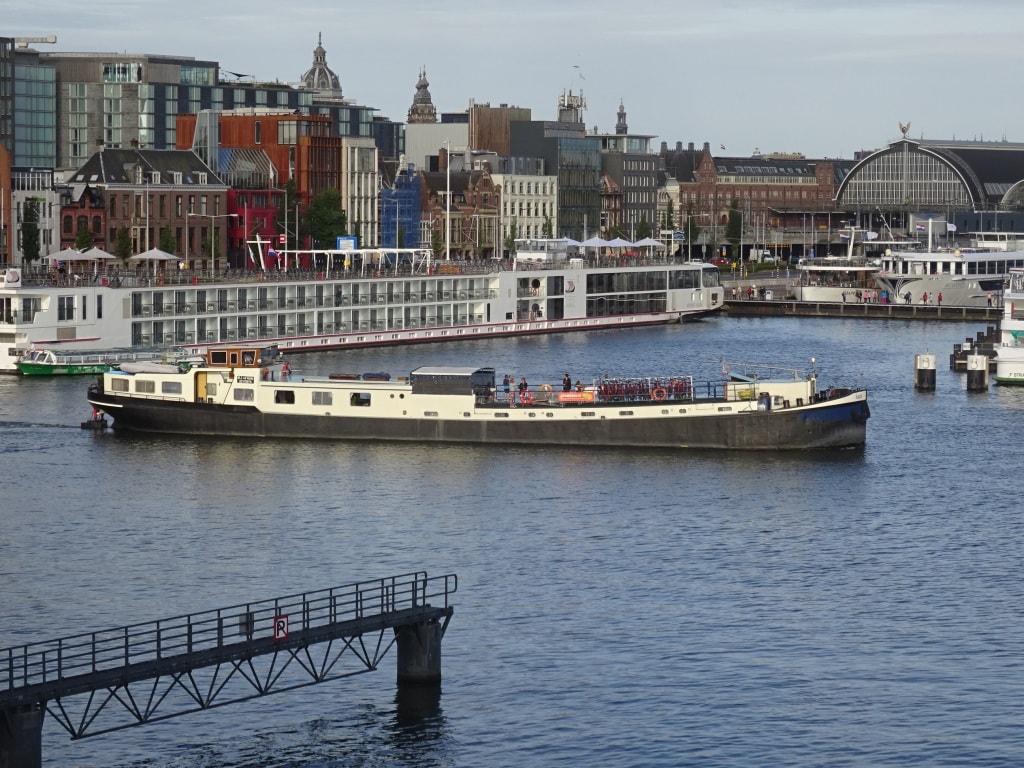 Amsterdam is an important cruise port. Not only deep sea cruise ships also river cruise ships, and we also have these Barge & Bike cruises. Probably the only cruise where you do not put on weight.