The weather forecast was calling for nearly wind still weather and smooth seas with a low swell from the West, which meant that there would be optimum tender conditions in the bay today. And that is what I needed as I was assigned to the 2nd best anchorage location. There are three official locations and a fourth one if needed but that last one is so far away that a captain either stays on the engines, closer to town,  or decides to cancel altogether if assigned to that one. It is simply too far from the town necessitating a too long a tender distance. Even anchorage nbr. 3, is over a mile from the port but as it was assigned to the Sapphire Princess I did not have to worry about that. Nbr. one anchorage was taken up by the Carnival Splendor which does a two day call here, with an overnight stay at sea and thus gets the preference. We were on number 2 and by putting the anchor in the right position the Statendam was just inside the lee of the Cape itself protecting us from the open ocean.

Normally we are the first one to arrive but today the Splendor was already at anchor. Nothing was happening yet with all the access doors firmly closed but she had already taken up position.  During our previous calls, she had always still been at sea, coming in 30 minutes behind us to re take her position from the day before. Not that it bothered us, I let the ship slowly drift into the anchorage position, while the tenders were going down and the platforms were being set up. This procedure always reminds me of a sort of invasion. Not with heavily armed soldiers streaming ashore to retake the land but with ladies with shopping bags, making an onslaught into the local shops.

Due to the distance anchorage two is ¾ of a mile away from the harbor entrance, so we also use two shore tenders to keep up the regular shuttle service. Carnival Corporation has set up a company in Cabo San Lucas with small tenders to service the Carnival ships, as they do not conduct a tender service themselves. If there is only one or no Carnival ship in, then those tenders (there are 14 in total of them) are also available to the sister brands. Thus we got two today and the Sapphire Princess had some as well.

They also bring out the authorities who come on board to clear the ship, and that saves us time as we do not have to send a tender to collect them from the shore side. On departure they are very useful again as they can bring back the very last of the guests from shore, while we can already start retrieving and stowing our own tenders. That saves us at least 30 minutes on the departure time, which are valuable minutes as it is a tight run from Cabo San Lucas to San Diego. Upon leaving you have to sail around the fishing boats; on the way we have the current and the wind against us in various areas and we also want to be docked a little bit early in San Diego to give CBP the chance to start processing everybody on time. This coming call San Diego that is even more important, as we will have our 90 day full crew inspection to go through; plus a changeover of about a 100 crew. 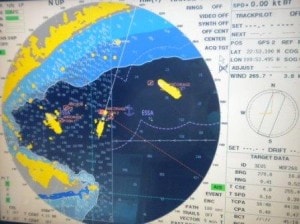 Early morning shot of the ships at anchor. The Statendam is under a different angle as the current curving around Cabo San Lucas  is pushing the stern to the West.

All through the morning I kept a close eye on the wind, as it started to veer to the South East. That is always bad news for Cabo as the waves generated by the wind start entering the bay. Luckily the wind force stayed under the 10 knots and meant that the waves were not building up. Each ship dealt with “keeping a lee” in its own way and as a result, we could see all three ship laying in a different direction. The Sapphire was keeping a tender lee on the portside, the Splendor on the starboard side and the Statendam tendered on both sides, just protected by the Cape.

By 14.30 we had everybody on board and we sailed out of the bay; honking the horn to keep the traffic away from us. Para sail, booze cruise, water scooters, glass bottom boats, they all seem to be around exactly at the moment you want to leave. So there was no racing out of the port today, too many amateurs on the water. We had to go very slow as we never know what they might do, if anything. Once past the Cape I had to make a wide circle to the south as the whole sport fishing fleet of Cabo seemed to be out there, and of course exactly on our track line. By 15.30 we were clear of it and I could come up to full speed, heading for San Diego.

The weather looks good with not too much wind but there is a wave field coming down from up North. We should meet and then sail through it by mid tomorrow morning and that might cause some ships movement.