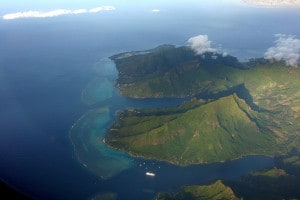 As I knew it was going to be a bouncy day in the bay, I wanted to be there as early as possible. So we aimed for 06.15 at the entrance of the bay, just an hour after sunrise when it was certain that the whole bay was going to be clearly visible in the daylight.

The top bay is Capt. Cooks Bay, the one below Opunoha Bay. (Courtesy from Internet)

Our initial schedule called to anchor in Captain Cook’s bay, but we were informed that the tender dock and the road leading towards it were under re-construction.  So the best option was to go next door to Opunoha Bay.  Both bays are identical anyway so it does not make any difference. However the pilot advised that with the current wind, still from the wrong direction, Opunoha Bay was a better choice. So off we went, sailed out of Papeete and with a wide turn North/West and then South, lining up for the entrance in the reef. By 06.45 we were at anchor and then the invasion of Moorea could start. 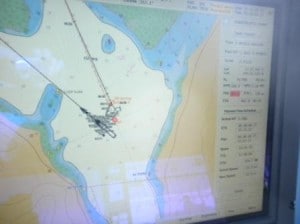 The Statendam at anchor. The red writing to the top right of the ship indicates the anchor position. the red dot below the ship, the required location where you normally are on a windless day. The black numbers around the ship indicate the times of where the ship was drifting/pushed to at certain times. The ship laying to a completely stretched anchor chain.

Although the reef offered some protection, there was still a swell rolling in, but as long as I would be able to keep the portside tender platform in the lee of the ship, we would be ok.

That meant dropping the starboard anchor under a right angle and then keeping the ship under even more of an angle to the wind and swell with the thrusters. That meant maneuvering all day, but that is the price that you have to pay as a captain, the only other option would have been cancelling the call altogether. And that is not the idea of course, so the deck department had a long day today. First the departure from Papeete in the very early morning and then a full day of tender service with officers ashore, officers on the platform, and the Staff captain and I on the bridge together with the Officer of the Watch. 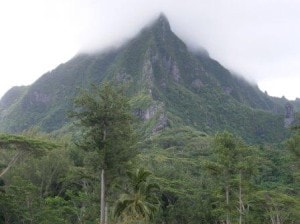 High mountains round the bay. It is only open from the North side. Unfortunately the Northside was the side the wind and the swell came in from.

All went well and we got everybody safely ashore and safely back again. On top of that, it did not rain at all, at least not on the ship. The top of the mountains stayed covered in clouds so it might have rained there and maybe the same on the West side of the island as I could not see that. By 11 am the sun even came through and we had a nearly normal Tahitian day.

The bay were we anchored is about 45 meters deep and that means that I paid out nearly all the anchor chain of the Starboard anchor. During the day a lot of force came on the chain. The wind was pushing with 20 knots on the starboard hull, the swell was pushing inwards as well and the thrusters were causing extra strain as well as they kept the ship under an un-natural angle.  Each ship has the tendency to settle straight behind its anchor and then depending on the strength of the wind, yawn more or less behind it.  Now the thrusters were preventing that natural movement and thus more strain on the chain. But we had so much chain-weight down on the bottom of the bay, that the ship stayed were it was. 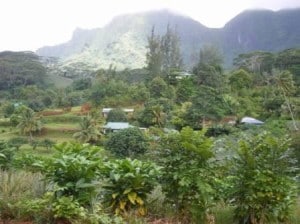 The lush tropical greenery around the bay.

Opunoha Bay, is for most of it surroundings a nature reserve. According to the pilot, an American sailed in here in 1905 with his yacht, loved it so much that he bought the whole bay. Later on he donated it to the government who kept the bay as a nature reserve, so there is no increase in housing or other development at anytime.  Thus we could see the place in its most unspoilt way.

The tender dock was in the only little village of the whole bay and is centered around a Protestant Church. 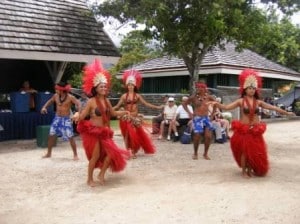 Most of the Tahitian population is Protestant, for the very simple reason that the Protestant Missionaries got there first.  A bit unusual as most French controlled islands are Roman Catholic, same as the mother land.

The Welcome Committee on the tender pier. (all pictures by roving reporter Lesley)

My next challenge came when it was time to retrieve the tenders. As the ship was under this lee-making angle, picking up the portside tenders was easy enough, but for the Starboard side I had to flip the ship way over, to create a lee there. Bringing the bow over, without the anchor holding it, meant that the strong wind started to push the ship deeper into the bay.  So we had to be quick as there was only about 1200 feet of room to play with.

Thus the moment that I had the lee, the tenders had to race under the blocks, hook in and be pulled out of the water, before the moment came that I had to swing back to stop the drift towards the shore. We had done this before of course and it all worked like clockwork. By 17.30 we sailed out of the bay, with all on board and the tenders safely stored.

Tomorrow we are in Rangiroa which could be the biggest challenge of our cruise, as it is a low lying atoll with no shelter at all. We need the weather to cooperate to make it a success.  Keeping our fingers crossed.