The stretch from Juneau to Ketchikan has one navigational highlight and that is going through Snow Passage. This is the fairly narrow passage on the Southside of Zarembo Island. If you want to avoid it, you have to go north of the Island which adds 25 miles to the journey but then you do not have to deal with the current, the traffic and the whales. There is not much reason to go all the way around as experience has taught us that the only challenge there really is the whales; and most of the time they are behaving themselves by playing close to the shore line. Traffic can be regulated with good passing agreements and the current is with us every day of our life. If you remain alert to it, it does not pose a big problem either. This time we had the full flood current with us and we were “flushed through the hole” as it were while going through. The only prudent action we take is to slow down to about 11 knots, which gives more time to make the 90 degree course change, which also avoids excessive listing of the ship when we “go around the corner” with giving more rudder. There were no whales around this time, only a few seals sitting on the danger buoy and for the rest a lot of birds resting on the water. The latter got really annoyed as we were disturbing their early morning peace by going exactly where they were sitting/floating. Amid much wing flapping and squawking they indignantly moved to a safer area. 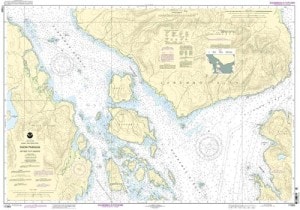 Snowpassage with a 90 degree turn from NW to SE curving around Busby Island in the middle.

The weather forecast for yesterday had indicated a 30% chance of rain. Well if it was 30% for the whole area, then it must have all fallen on Ketchikan port as we had rain all day. The people at our CLAA agency were all complaining about it. It was too cold and too wet for the time of the year and with Ketchikan having 332 days of rain each year that takes some saying. I could visit our ships agents today as we were docked right on top of their office.

With the influx of more and larger cruise ships the port has built, mainly by encouraging local enterprise, two more docks. The old wooden docks have been upgraded and further to the West two purpose built cruise ship docks have been built. Berth 3 & 4 can each take a large cruise ship, so four biggies can be accommodated at the same time. On days like this, that is really necessary as all the berths were full by the time we were docked. The Norwegian Pearl and the Celebrity Century even had to do hot bunking (e.g. one leaving at 12.30 and the other one docking at 12.45 )to make all the calls possible. Thus we were docking at berth four, which is the furtherest out from downtown but a good dock as there is a covered waiting area where the tour busses come in.

The Statendam had never docked there before so we had to experiment a little bit with the best location for the gangway. This time we used the Main Deck gangway but we think we have found a way to make B deck fit and that will eliminate the use of ramps and switching gangways for high and low water. The centre of the dock is a floating pontoon that goes up and down with the tide and if I can get the ship safely lined up for that one, then we will be able to make it much more convenient for everybody. Our agency here tries to plan it all by using small scale models with all the break-doors indicated, so they plan for most options but some things you just have to try. So we will next time try to see if the mooring ropes work out with this new position.

With so many ships in, the arrivals and departures have to be staggered otherwise there is simply not enough capacity for the ships guests to go on tour. Hence the buses that were used by the Oosterdam in the morning were used by us in the afternoon. Same for the buses of the Norwegian Pearl; in the afternoon they made the tours for the guests of the Celebrity Century. We are all different companies but when you come to a port you tend to use the same tour operators. A number of tours use Holland America Line buses, which brings in money to our company,and as they operate under the franchise of Gray Line of Alaska the guests of NCL and Celebrity cannot really see that they are sitting in a Holland America Line bus.

We left the port by 19.00 hrs to sail Southbound for Vancouver. Tonight we will go through Dixon Entrance, Hecate Strait, Queen Charlotte Sound & Strait and then by 15.30 hrs local time we will pick up the Canadian pilots for the remainder of the journey to Vancouver. 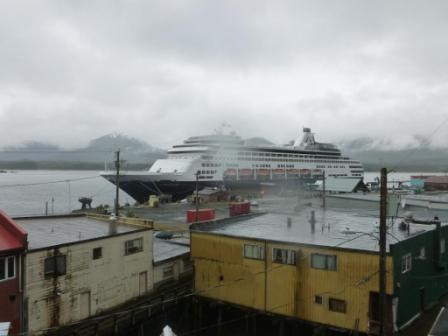