When we left last night we were in quite a hurry as the tide window started around 22.30 hrs. From Lions Gate Bridge to Discovery Pass is 90 Nautical Miles and when passing the bridge at 17.00 hrs. to getting there then gives 5.5 hrs.  90 miles at 20 knots. Is 4.5 hrs. at full speed but the last part, when sailing into Discovery Pass leading up to Seymour Narrows, the speed has to come down to 16 knots and then 10 knots due to traffic and no wake sailing close to the coast. That costs another 30 minutes and you suddenly are looking at less than an hour for any un-expected happenings. And you have to prepare for that as there is a lot of barge traffic in the area and as it is high summer, fishermen both professional and amateurs. Thus while in the open waters of Georgia Strait the Captain let the Westerdam come up to sea speed to build up a little plus and so to ensure that we would be on time. END_OF_DOCUMENT_TOKEN_TO_BE_REPLACED

It is my personal opinion that for a compact large city, Vancouver is one of the nicest ports to sail into, together with Venice and maybe Naples. With compact I mean, you enter and there is constantly something to see. New York is also impressive with the Verrazano Bridge, the Statue of Liberty and downtown Manhattan but it is all far apart.  Same for San Francisco, again an impressive bridge, followed by Alcatraz but is takes place over a considerable distance. Vancouver only takes 30 minutes from 1 mile before the Lions Gate Bridge to the dock and in those 30 minutes there is a constant impact on the senses. I have never heard anybody complaining on the bridge about sailing into Vancouver while normally, a long sail in gives rise to grumbles among the navigators; and they are very good in grumbling. (Not to say moaning). END_OF_DOCUMENT_TOKEN_TO_BE_REPLACED

At 23.00 hrs. we boarded the St. Lawrence River pilots at Escomins and then sailed up the river for a 06.00 hrs. approach to the port. For that we pick up a docking pilot about 3 miles away from Quebec port itself. We use a local docking pilot as he can talk to the linesmen for the rope configuration etc. once we come alongside. Not an un-necessary service as the local linesmen here belong to the most argumentive linesmen we have during our cruises anywhere. So when the ships want something,  they do not always agree and that makes the port pilot very useful. On departure we do not have one, as letting go the lines does normally not result in too many heated exchanges. I speak a certain amount of French but not Quebecois but this morning on arrival I heard a few choice words which I have to try to remember as they might be very handy for the future. They sounded quite impressive but maybe not to be used in refined company.    END_OF_DOCUMENT_TOKEN_TO_BE_REPLACED

The weather is not in sync with our cruise. Why did we need to have all this wind yesterday and today we have a nearly wind still day. Strong winds at sea do not bother us but it does in a port. It would have been so much better the other way around. And then tomorrow when we are in port again, the wind is supposed to pick up. Making our life difficult again. But luckily Quebec has tugboats and it has a plan B, which Charlotte town did not have. If the wind is too strong in Quebec you simply continue the journey or initiate the blow away maneuver and have the ship pushed back to mid river by wind and current. The St. Laurence River is wide enough to do so without getting worried. But tomorrow should be no problem; either the winds are favorable or we use tugs. END_OF_DOCUMENT_TOKEN_TO_BE_REPLACED

What we were afraid of last evening happened; the wind was very strong when we approached the pilot station. Gusts to 50 knots were observed when the frontal system reached the island. The question is then always: How to deal with it. If you already know that it is a no-go the night before then you can try a deviation to another port, stay in the same port or just sail directly to the next scheduled port. The last option is the easiest as it has the least impact on the ships operations, but it has quite an impact on the guests as they now miss a port. So we only do that if we think that there is absolutely no other option available. But that is seldom the case and that was also not the case today. END_OF_DOCUMENT_TOKEN_TO_BE_REPLACED

Under a sunny sky we sailed into the fjord at which end Sydney is located. There was a chilly wind blowing but from a nautical point of view that is a good thing as it keeps the fog away. So the guests could see the whole approach and I think that most guests did as we had an official arrival time of 10.00 hrs. That meant a pilot boarding time of 08.00, arriving at the turning basin at 09.00 hrs. and then going astern to the dock with first lines ashore by 09.20 and 09.45 all fast. Guests could see it all during breakfast. We prefer to swing on arrival as it is always better to be pointing with the nose to open sea, so if the weather becomes inclement (read wind increase) then we can just race away. With nose in, you have to go slowly astern to the turning basin and then swing around before you can race to safety / open waters.  We do sometimes dock nose in, if we have been delayed and want to save some time or if the Bo ‘sun wants to paint the portside; but only if the weather (read no wind increase during the day) is nice. Today the Bo ‘sun did not feel the urge to paint the portside and thus the Captain swung on arrival and docked starboard side to. Ready to get out. END_OF_DOCUMENT_TOKEN_TO_BE_REPLACED

And we were lucky with the weather; the cooler temperature caused by a cool wind just kept the air/sea temperature in balance and we did not have any white clouds descending on the water and thus on the ship. Life is full of these little surprises and we cherish them if we get them. The run from Bar Harbor to Halifax is quite tight as far as the average speed is quite high so instead of putting the pedal to the metal and hoping that we will arrive on time, we arrive at the official arrival time of 09.00 hrs. something that in the old days, low cost fuel days,  would have been 08.00 hrs. But to keep the time in port the same we also depart an hour later and thus the amount of quality time in Halifax remained the same. 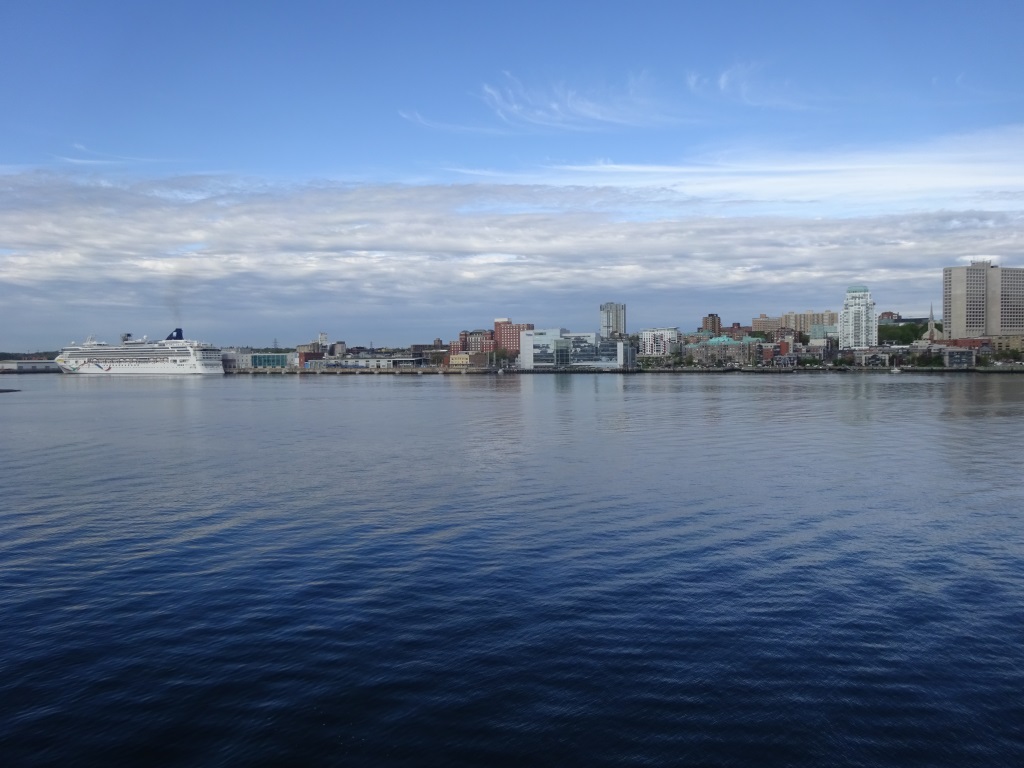 Arrival in sunny Halifax. The Norwegian Dawn is just docking as we are approaching the dock behind her. She was coming from somewhere else but was clearly struggling to get alongside by 08.00 hrs. Whatever the schedules both ships docked under a sunny sky with very little wind and that gave a beautiful day. There have not been very many of them yet in Halifax so all the tourist guides, bus drivers and security personnel had an extra spring in their step and an extra wide smile on their face. It seemed that even the arrival bag piper was making more noise than normally. END_OF_DOCUMENT_TOKEN_TO_BE_REPLACED

The summer is starting to gear up and we have now had a few nice days in a row. With us in Bar Harbor today were the Independence and American Constitution of American Cruise Lines and the Celebrity Summit of Celebrity cruises.  The first two can carry 100 guests each and the Summit approx. 2200 with some bunk beds filled so altogether with us there were 3700 cruise guests that could have gone ashore to make the shop keepers happy. Even on a Sunday a total 3700 is not that many when compared to St. Thomas, St. Maarten or Nassau but for a small place as Bar Harbor it makes for a very busy day. The port has one very small dock and that should have been occupied by the American Constitution and thus the other one was at anchor next to us. I said should have been as later on we saw that ship also at anchor. END_OF_DOCUMENT_TOKEN_TO_BE_REPLACED

With glorious weather we ended our cruise today. Most guests were up and about early and could see a beautiful sailing in, into Boston Harbor. Those who did not were most likely fully focused on their last breakfast on board. This being up and about this early on the last day of the cruise is something we call “channel fever” inside Holland America. It goes back to the Trans-Atlantic days when the day before Rotterdam, while sailing into the English Channel, everybody was up and about early for last minute packing, making final arrangements or just being too nervous to sleep in. Whatever floats their boat, most of the guests were out and about very early. END_OF_DOCUMENT_TOKEN_TO_BE_REPLACED

The weather forecast promised a glorious day and the weather guru’s had it right this time, it was glorious. By 06.00 hrs. the sun was shining and there was hardly any wind. A perfect day for tender service, if you have to do a tender service. And we have to as Bar Harbor has only a teeny – weenie dock where only the small coastal cruise ships can dock. So we dropped anchor in Frenchman’s bay by 07.00 hrs. and we were ready to go. But nobody could go as all the guests had to go through Custom and Border Protection clearance first, before they were allowed ashore. Luckily the CBP Officers here are very much willing to help with making the process as smooth as possible. And that meant that once you had seen a CBP officer you received proof that you had been and then you could go ashore if you wanted to. This is not always the case; there are ports where all the guests have to wait until everybody has been inspected. Nothing we can do about it as this decision depends on the local CBP supervisor and we on the ships do not know why it is different sometimes.  But here it works and so the guests that wanted to go ashore early had the option. END_OF_DOCUMENT_TOKEN_TO_BE_REPLACED