What we were afraid of last evening happened; the wind was very strong when we approached the pilot station. Gusts to 50 knots were observed when the frontal system reached the island. The question is then always: How to deal with it. If you already know that it is a no-go the night before then you can try a deviation to another port, stay in the same port or just sail directly to the next scheduled port. The last option is the easiest as it has the least impact on the ships operations, but it has quite an impact on the guests as they now miss a port. So we only do that if we think that there is absolutely no other option available. But that is seldom the case and that was also not the case today.

We use weather forecasts from various sources and the challenge is often that they are not the same. Most of these forecasts work with computer models which are updated by local observations. If there is no local observer then the forecast does not get adjusted for the local situation. That can create quite a bit of confusion. So we use our brains and experience for the interpretation of the forecast and try to augment it with local observations. Most of the time from the pilot and sometimes the ships agent (If we know that he and she has maritime experience) Under normal circumstances we then get a good snapshot of the current situation but we still have to be careful as it depends on where they stand. I have received updates in the past, even from pilots, who advised that it was almost wind still and then I found out that he/she was standing in the lee of a building. We also have a pilot somewhere in the Caribbean basin who always has nice weather because his wife runs a souvenir shop and wants the ships to come in. So we have to weigh the local information as well. 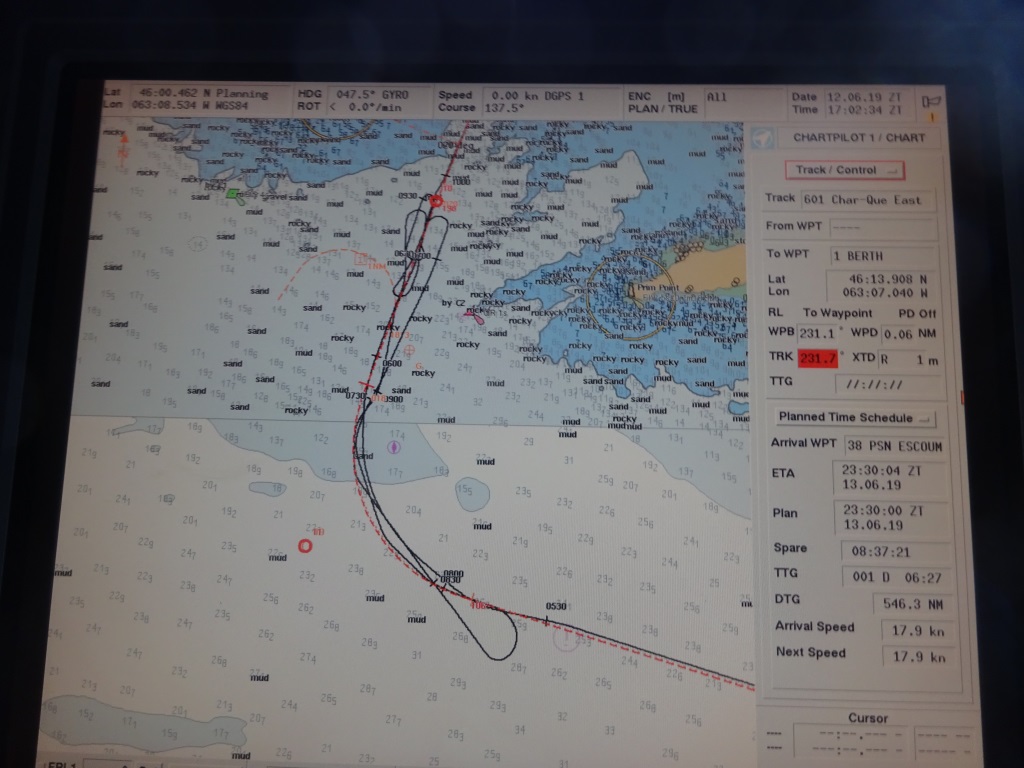 This is the “race track” made by navigator 3rd officer Billie van Buuren who was conning the ship while the Captain was watching and deciding what was possible and what was not. Hence us trying 3 times and then waiting for the wind to abate. the red dot on the chart is the “abort” point and that is where we turned every time.

So we do the following; we are going to have a look before we decide to cancel. For that we have a routine. Get the pilot on board and discuss the situation. Then we sail to as close as we can safely go. This is called the abort point or commitment point. This is the last moment that we can still turn around, or safely drift away back to deeper water. If all is within in the safety margins, we go, if not we do not go.  The safety margins depend on the power of the ship against the wind, the space inside, the availability of a plan B (Tugboats, drop anchor etc.)  So all of this played through the heads of the captain, or better said, three captains and the pilot; and the complete bridge team. Apart from the Zaandam captain we also have Captain Peter Bos on board for quality control and there is then yours truly also milling around. The local pilot has been here for about 30 years and we put great trust in him. He has never let us down in giving objective and professional information. (He better do, otherwise he does not get breakfast anymore……………) 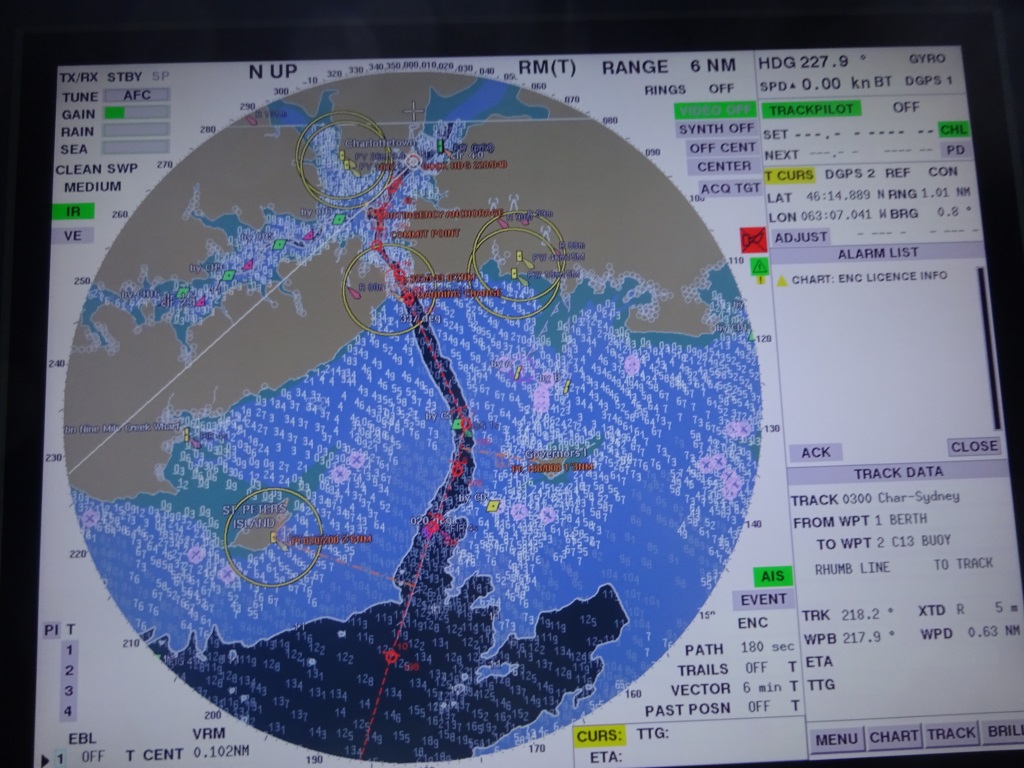 This is the challenge. We have to go through a very narrow channel into the bay.  If we would run aground it would not be disastrous as it is mud everywhere but it is not part of our focus to do that, so the wind conditions have to be right.

The challenge this morning was the way the weather front was moving in. First with rain clouds and then with sunny skies. There can be extra wind in the rain; there can be extra wind in the boundary between clouds and the clear skies. And it can all change anytime as there is also a certain interaction between land and sky, so the best thing to do is check the options and then sail to the abort point and see what happens. We did so three times and each time the wind was fluctuating. That is even more dangerous than steady wind as a steady wind we can maneuver against or use it as our friend by angling the ship. Gusts are dangerous as we cannot predict them nor do we know how strong they will be. After the 3rd attempt, it was decided to  wait until the band of clouds and rain was completely gone and then see if the wind under the cloudless sky was steady and hopefully also a little bit less strong. 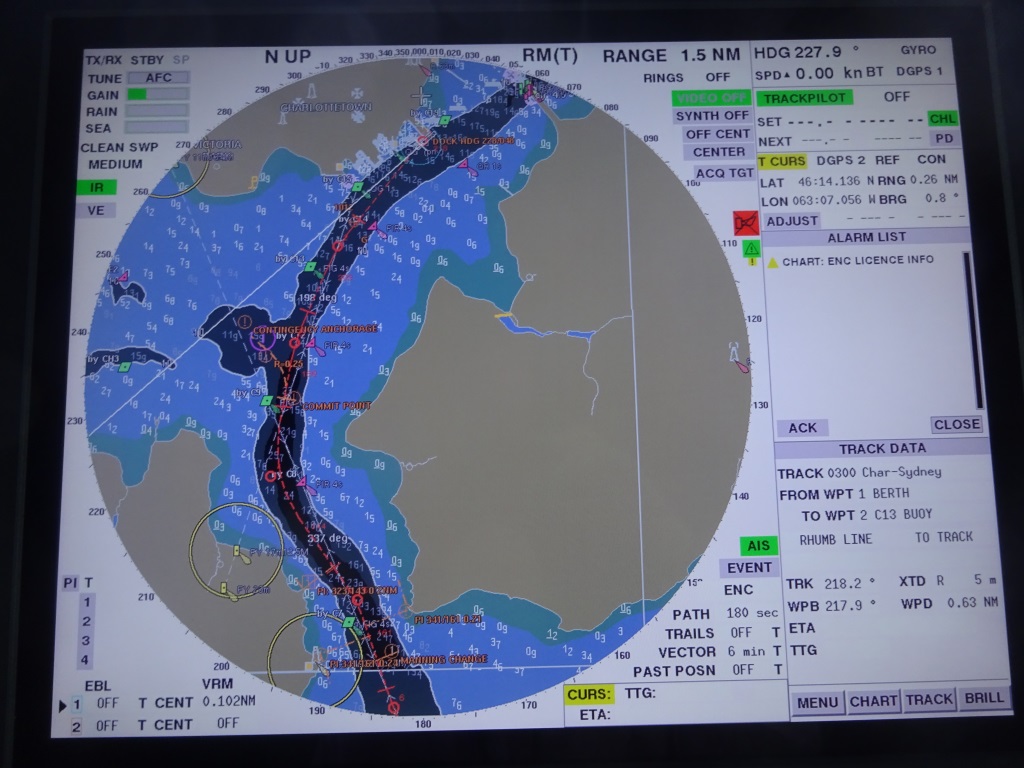 Once inside we have a small plan B to go into the darker blue area half up to the left but only with NW wind so we do not blow into the mud. But for the rest we have to commit to going all the way, Hence we wait until we know that we can handle the wind all the way in.

That occurred by 10.30 so at once the Zaandam charged into port. The wind was still too strong to swing around so we went portside alongside. The guests did not get a whole day but at least a half a day in sunny Charlottetown.  In the afternoon the wind is forecast to decrease and so we will be able to swing on departure. If not then the guests can sample the night life of Charlottetown which I have been told is very exuberant.

Tomorrow we sail on the St. Lawrence River towards Quebec. Another sunny day is expected and the wind is supposed to be gone completely,