Under a sunny sky we sailed into the fjord at which end Sydney is located. There was a chilly wind blowing but from a nautical point of view that is a good thing as it keeps the fog away. So the guests could see the whole approach and I think that most guests did as we had an official arrival time of 10.00 hrs. That meant a pilot boarding time of 08.00, arriving at the turning basin at 09.00 hrs. and then going astern to the dock with first lines ashore by 09.20 and 09.45 all fast. Guests could see it all during breakfast. We prefer to swing on arrival as it is always better to be pointing with the nose to open sea, so if the weather becomes inclement (read wind increase) then we can just race away. With nose in, you have to go slowly astern to the turning basin and then swing around before you can race to safety / open waters.  We do sometimes dock nose in, if we have been delayed and want to save some time or if the Bo ‘sun wants to paint the portside; but only if the weather (read no wind increase during the day) is nice. Today the Bo ‘sun did not feel the urge to paint the portside and thus the Captain swung on arrival and docked starboard side to. Ready to get out.

Sydney is the (or calls itself) Fiddler Capital of the world and indeed it seems that there is a considerable number of residents who spend the dark winter months fiddling away, by themselves, in groups and even in competitions. The largest competition is the World Championships which take place here in Sydney.  I always equated fiddling with old geezers in suspenders in an Outback Saloon in the Wild West but as the pilot explained to me once, this is serious business and the musicians have to have highly skilled techniques to get to the finals of these championships. He himself could not stand the music but his wife was a player and so every evening he could retreat to his man cave (shed) without endangering matrimonial bliss. 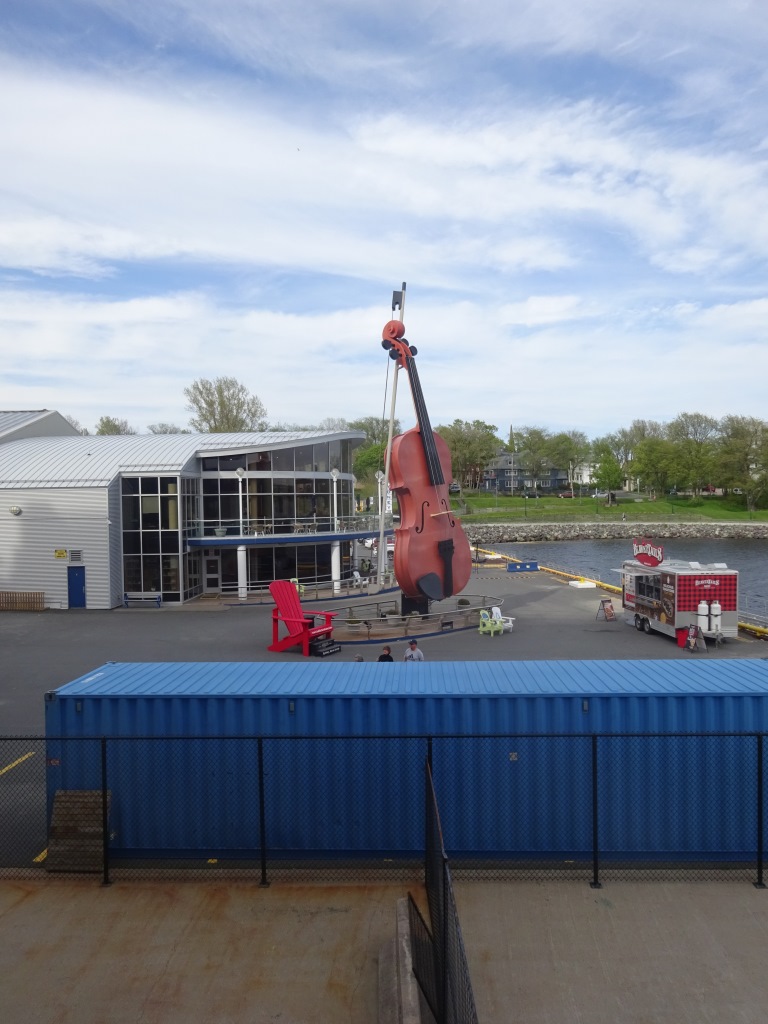 Sydney is a beautiful little town on a sunny day and then great for a stroll into town. It is however somewhat limited, although it has an Irish Pub. So most guests opt here for a shore excursion. There are several but all of them start with a panoramic tour, as the scenery is spectacular, and some of them continue to be one as it involves wildlife (in abundance) either observed from the ground or from a sailing vessel on a lake. Then there is a tour visiting the local Indian tribe (spelled M’kmaq, pronounced Micmac and their territory is called Miꞌkmaꞌki.) who are in a similar way as in Alaska working very hard to protect and resurrect their heritage and culture. As is not unusual, they did not have written language so their past is preserved by oral tradition only. I personally find, keeping the past alive, very important as knowing where you came from gives depth to who you are and tends to influence how your go about your life (At least that is my personal opinion). Because of the good weather the tours only just made it back on time before the all on board deadline. 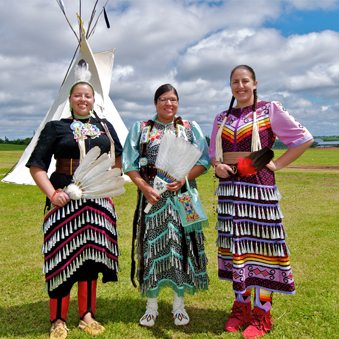 I googled this photo from the internet as I do not have one of my own. But this one intrigues me as being more used to west coast and Alaskan Indians, I have never seen indian dress with tassels before.

We were quite eager to get on the way as the wind was picking up steadily. There is a large frontal system moving up from the south. Which has brought torrential rains to parts of the east coast USA and now it is coming closer to Nova Scotia. By the time we left it was gusting close to 25 knots and that is about the safe limit of maneuvering with the Zaandam at the dock. There are no tugboats in Sydney and thus you either get out or you stay in.  So we sailed as soon as we could for open sea and are now on the way to Charlottetown on Prince Edward Island. There we will arrive at 06.00 near the pilot station to assess the weather. Our pilot will have been watching the wind on the dock as that is crucial for maneuvering and for our decision making process. There is not much of a Plan B when going in as we sail in a channel churned out by a river and every plan B somehow involves running aground in the mud. So we need what optimists say “a window of opportunity”. Keeping our fingers crossed.

With this frontal system the weather for the day could be anything from partly cloudy, to overcast to rainy. One thing will be certain, it will be windy.