The weather forecast promised a glorious day and the weather guru’s had it right this time, it was glorious. By 06.00 hrs. the sun was shining and there was hardly any wind. A perfect day for tender service, if you have to do a tender service. And we have to as Bar Harbor has only a teeny – weenie dock where only the small coastal cruise ships can dock. So we dropped anchor in Frenchman’s bay by 07.00 hrs. and we were ready to go. But nobody could go as all the guests had to go through Custom and Border Protection clearance first, before they were allowed ashore. Luckily the CBP Officers here are very much willing to help with making the process as smooth as possible. And that meant that once you had seen a CBP officer you received proof that you had been and then you could go ashore if you wanted to. This is not always the case; there are ports where all the guests have to wait until everybody has been inspected. Nothing we can do about it as this decision depends on the local CBP supervisor and we on the ships do not know why it is different sometimes.  But here it works and so the guests that wanted to go ashore early had the option.

It is quite a long sail in and once the lobster season is in full swing (at the moment the water is still too cold for the lobsters) the whole approach to the anchorage is full of lobster pots. Literally thousands of them. Also here, same as in Sydney, the pilots and the lobster potters have come to an agreement to keep the fairway open for the ships so they do not get damaged and the fishermen do not lose their buoys and thus their connected pots. But there is always one fisherman who knows better and plants his/her lobster pots right in the middle of the steamer track. And that is then normally the end of the lobster pots because if a propeller cuts the rope then you cannot find the pot back anymore. I do not know if in winter, when most lobster pots have been removed, somebody would go on a “pot fishing” expedition to find some of these lost pots back as there must we quite a few. Maybe there is a committee??? 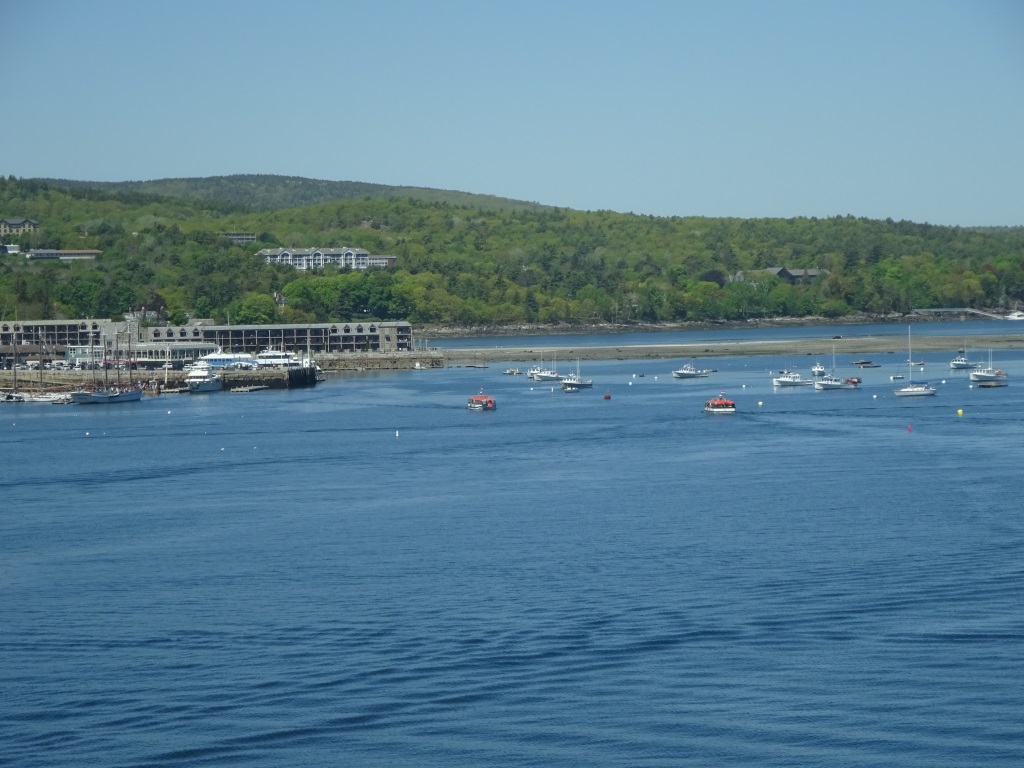 Bar Harbor -Harbor. A 10 minute tender ride from the ship. This is late spring so not too many boats and no lobster pots.

The State of Maine is one of the older states of the USA courtesy of being on the east coast and hence there are a number of peculiarities to the naming system and the town layout that you do not always see on the west coast where the Grid System is in place and a more structured naming system is followed. That makes Bar Harbor quaint and makes us Europeans, often coming from historical areas, feel right at home. Even the name of the bay – Frenchmans Bay is unusual as the whole area is full of Anglo Saxon settler roots. There are two main theories for this name: a. A French explorer, Samuel de Champlain came here in 1604 or B. it was because the bay was used as a staging area for French warships getting ready to fight the British around the time  of the USA independence. I put my money on the latter explanation as explorers tend to name places after Royalty, Place names or Famous people at home or sometimes after themselves or other crew.  But I suppose it all has been lost in the mists of time. 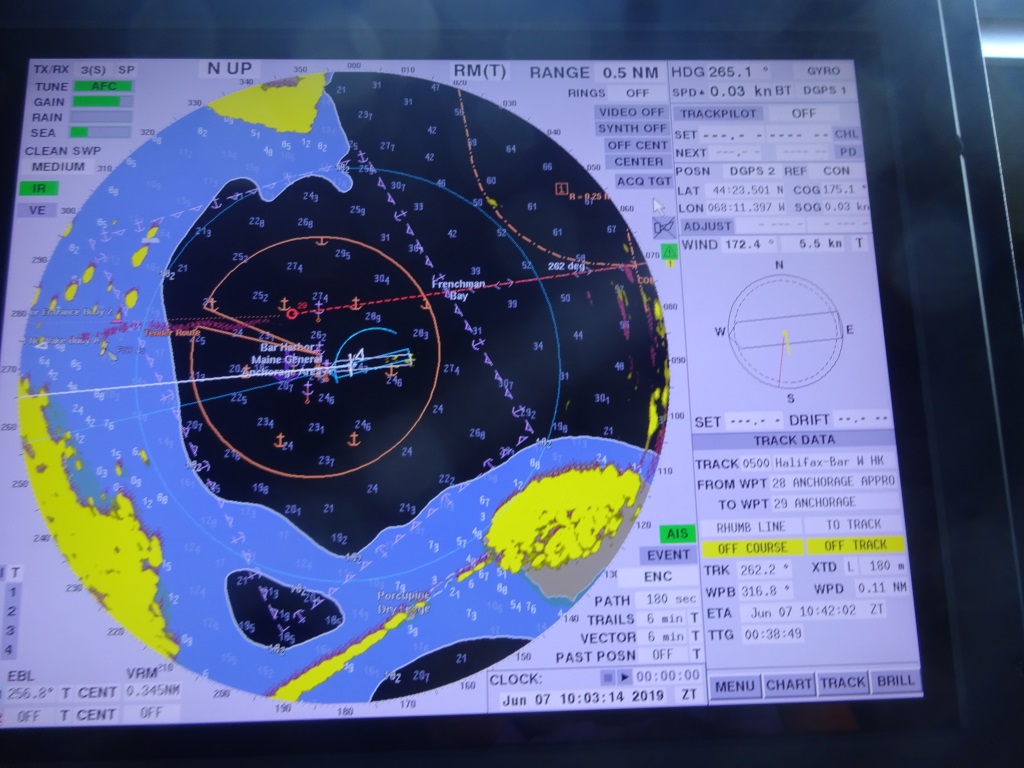 The anchorage of Bar Harbor, Frenchmans Bay. or Beacon Bald Porcupine Island Breakwater Light mentioned below is the white line at the bottom of the screen

Where we drop anchor is an area that listens to the grand name of: Bar Harbor Maine General Anchorage Area. Not many ports have this; often the areas for anchoring are simply numbered 1 to 5 or A, B, C etc. So this name is a real mouthful and is most of the time simplified with: “you are going to same place as last week”.  To give another example: When at anchor the officer of the watch checks if the ship remains in position, he/she does so by verifying the radar /electronic chart picture. That one is then verified again (as GPS can also have a hiccup) by taking visual bearings. One of the conspicuous points that we use (A conspicuous point is a point which you can see out of the window but also can identify in the chart) is called Beacon Bald Porcupine Island Breakwater Light. In our language “that thing at the end of that pier”.

So today we had a good day and the tenders could go to and from the ship without much hindrance. Also the tourist season has not started yet and thus the number of six pack navigators milling around is near zero. But we had one this morning; even worse, this was supposed to be a professional. A small sightseeing boat was sailing past the port with one of our tenders coming out; and although our tender had the right of way the sightseeing boat happily kept sightseeing and cut right in front of our tender. But we train our tender drivers very strictly in dealing with these happenings and thus they simply stop the tender and wait. The logic always is, the whole world is mad except us; and we will get our guests safely from A to B and back.

I have blog readers everywhere but I am quite proud to announce that the Master of the ms Zaandam is one of them and he saw yesterday that I had not posted a photo of the QM2 appearing out of the fog on the blog. So he supplied one and herewith I correct my omission. 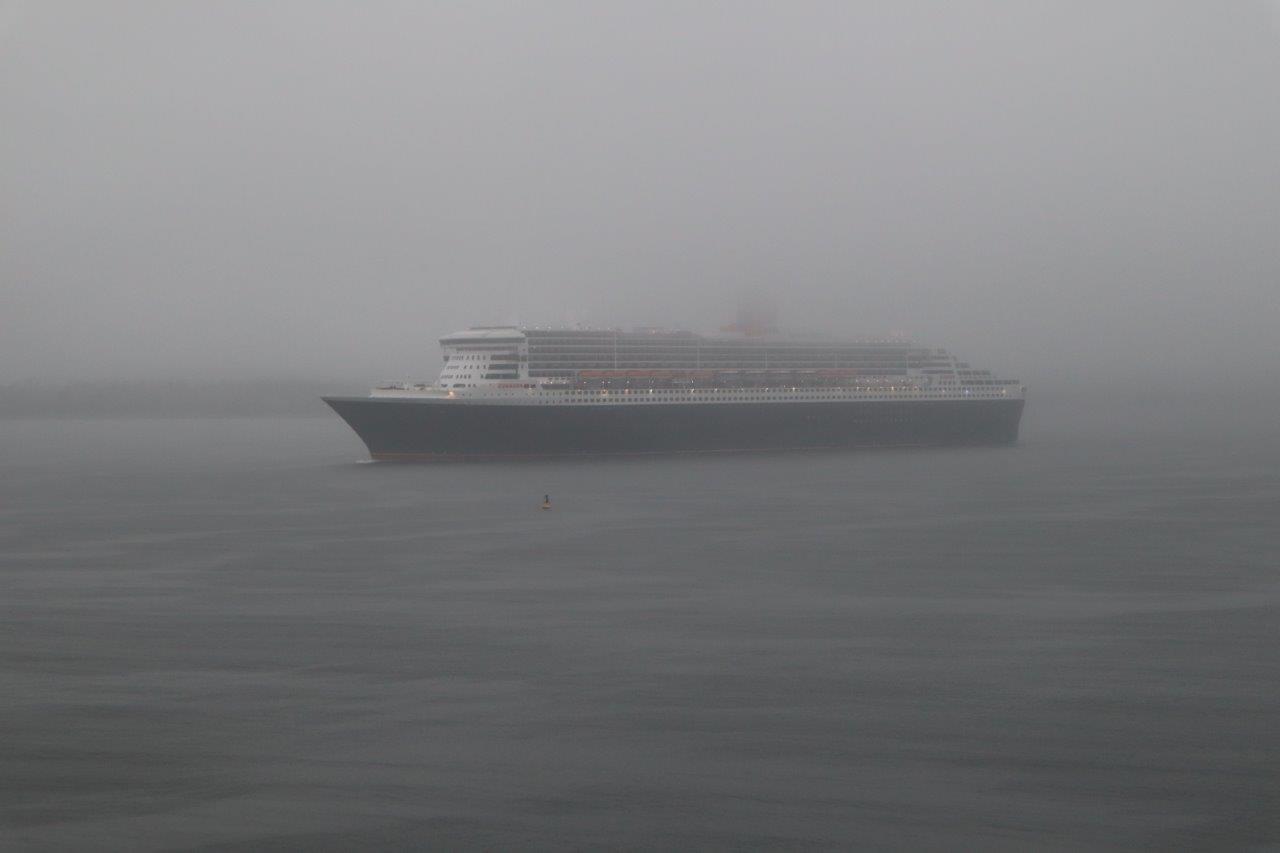 Tomorrow we are in Boston and we are supposed to be alongside by 07.00 hrs. as long as there are no container ships, dredgers and airplanes in the way.  Weather: we are expecting another glorious day with sunshine temperatures of 71oC or 20oC and a gentle breeze.