I can see why the Scots of Scotland decided to settle down here and named the province Nova Scotia. It has the same weather as in the mother country. As today it was a day as if we were in the Highlands. Foggy, drizzling and with a cold wind blowing. It even came included with a bag pipe player on arrival; dressed in full Scottish gear. So it all felt real Scottish.  We had an un-expected quirk in the proceedings as the ship received an email, saying that our berth was suddenly occupied by the Queen Mary 2; which was not supposed to be there at all. But the promise was that she would be gone before we came to the dock. It turned out that she had come in for a medical disembarkation while at the end of a trans-atlantic voyage. We were a bit amazed about that as normally the Canadian Coastguard loves to come out with their boats and do a medical disembark at the pilot station. So either they did not have a boat available or the patient would could not deal with the boat ride back in again. Saving lives always comes first and costs are not taken into consideration; but this must have been an expensive detour. Extra fuel consumption to make and keep the schedule, pilot, linesmen and docking fees and this during the night hours. No wonder the linesmen were in a good mood this morning, they had a good bonus night. We of course worried that the QM2 might not have left on time due to some un-expected complication but she did pull out 0700 and we passed each other just outside the port.

We were supposed to dock at Pier 22 as work was still going on at Pier 21, improving the quality of the bollards we use for docking. But when we arrived it turned out that the repairs had been completed and we could dock at what has been a passenger / cruise terminal since the 1920’s.  For a long long time this was the dock where the emigrants for Canada came in, although there was the option to sail with some ships (including Holland America) up river to Quebec and/or Montreal. So many thousands of immigrants passed through the doors here to start a new life. Especially after the 2nd world war. Pier 21 has now been turned into a museum and is very worthwhile visiting. (https://pier21.ca) 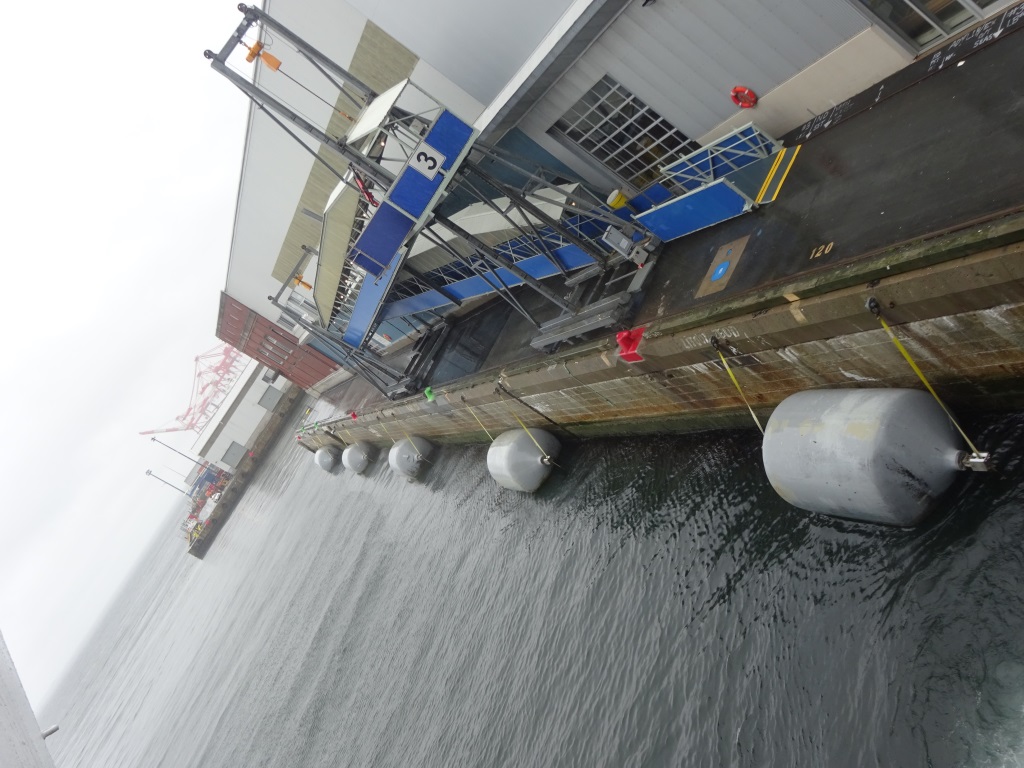 The reason for all this work on the bollards had to do with last year. When on a windy day (and it can be very windy in Halifax) a large cruise ship caught the full brunt of the wind and pulled the bollards out of the dock. Most of the bollards were still from the old days when the ships were much smaller and did not have balconies which catch the wind and hold it. (If you have a smooth vertical hull then some of the wind is deflected by that hull upwards and away; and that is not the case if you have rows of boxes along the superstructure) All those old bollards had a holding strength of 50 tons. More than enough in the old days but if you take into account that some of our mooring lines can hold / pull over a 100 tons, then the picture changes. Thus we now have some 150 ton bollards and even some 200 ton bollards.

We were convinced that we might have had to rely on that strength as the weather forecast promised a lot of wind in the afternoon. Indeed the wind came up but did not stay. What did stay was the rain. I am training the Sr. Cadet at the moment with mooring station leadership and he was just amazed about the weather here. Luckily it is not always the case, in my 60+ cruises to this area during my career I had lots of nice weather, which was good for the guests, but also lots of fog which was not so good for me and what caused long nights sitting behind the radar. When it rains the visibility is often just good enough to avoid dense fog and thus: while the captain hopes that the guests have a nice and sunny day, the captain secretly also hopes that there might be a rain shower somewhere to keep the fog at bay.

Note the wake of the Zaandam. We made a big course change so we could bring the pilot boat alongside in the lee of the ship for a safe transfer of the pilot.

Halifax port is fairly sheltered from south westerly winds and thus there was a lot more wind outside than in the harbor. So while we sailed out we had to make a big lee for the pilot boat to get the pilot off. The Captain offered the pilot an overnight stay on board with lobster dinner and the chance to see Bar Harbor but he was not interested.  So we made a lee.

Weather for tomorrow: sunny with 64oF or 18oC and little wind.  Good for the guests, but the bridge team can prepare for “Very low hanging Clouds again”. 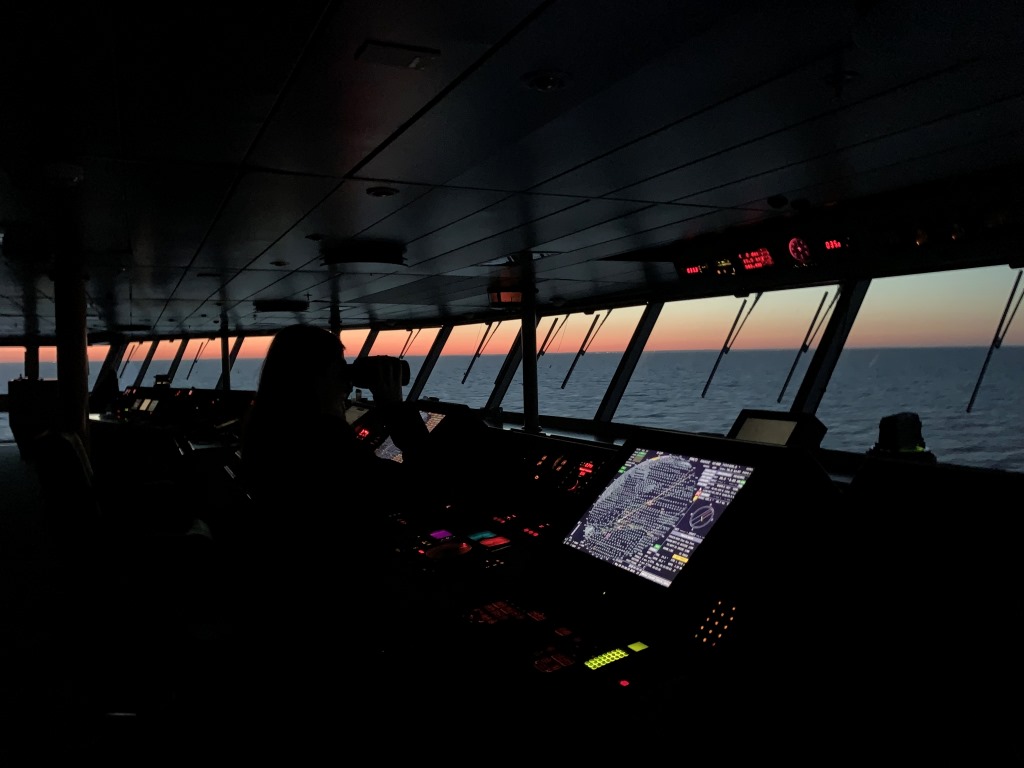 Life is not all misery and fog here in East Canada. This was sunset last night after leaving Sydney, The lady in profile with the binoculars is our 2nd officer Iuliana Petrica, who has been with us since 2015.