Contrary to various forecasts, the weather was quite good. Very good for Sydney for this time of the year. On the verge of going to summer, the weather is very unsettled and as a result the various weather forecasts can be completely different. In the vein of, is it partly cloudy, or is it partly sunny.  Is the wind 20 knots or 25 knots or 15 knots?  Thus a lot of wind was predicted today, while we did not really know if that prediction would come true and that makes Sydney a difficult port. If there really is too much wind then things are easy. The captain just cancels the port as it is not safe to go in. But if the wind force is on the edge of what is within in the safety margins then it becomes more complicated. Docking might be possible but will we be able to get out again in the afternoon? If there is not too much wind to go in but too much wind to dock, then dropping the anchor and using tenders might be an option. Not a nice option as it is a very long tender distance but it is an option to be considered. All this is going through the captains mind (and the rest of the crew) when approaching Sydney.

Luckily today we could forget our worries. On arrival is was nearly wind still in the port and from past experience we could sort of predict what increase in winds would be during the day and that the strength of these winds would not stop us from departing. That is also a consideration as we do not want to cancel Sydney but if we are stuck inside due to the weather then we cannot make Halifax on time. And although Sydney is a lovely port, its nightlife does not compensate for a day in Halifax. Thus with good feelings we docked in Sydney for a nice call. Not sunshine all the way but not miserable weather either. 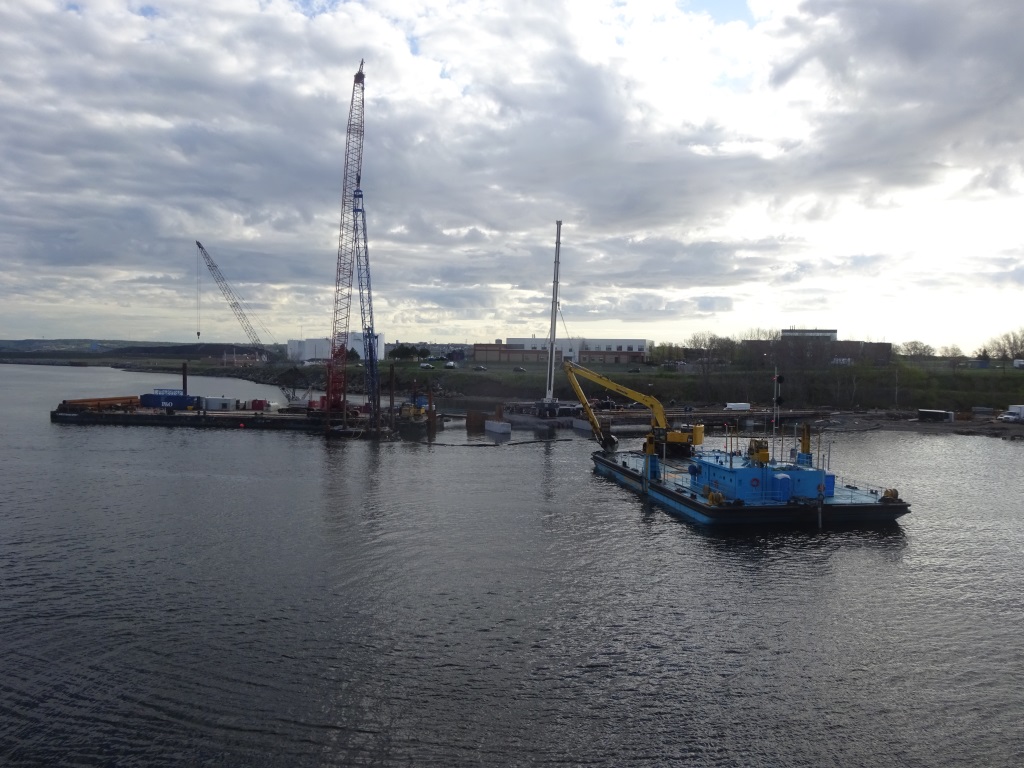 The cruise industry is booming in the Canadian Maritimes and while they are extending the docking option in Charlotte town with new dolphins, in Sydney they are building a second cruise pier, just outside the bay where we are now docking at the main cruise terminal. The new location makes sense as it will not have the challenge of deciding to go to the dock and not being able to leave again as here the space of maneuvering and drifting on the wind is much larger.  The way they are progressing will ensure that it will be ready for next year and then on a one ship day in port, we will have a 3rd option up our sleeve, docking at the new terminal if the one deeper inside is not possible due to the wind. 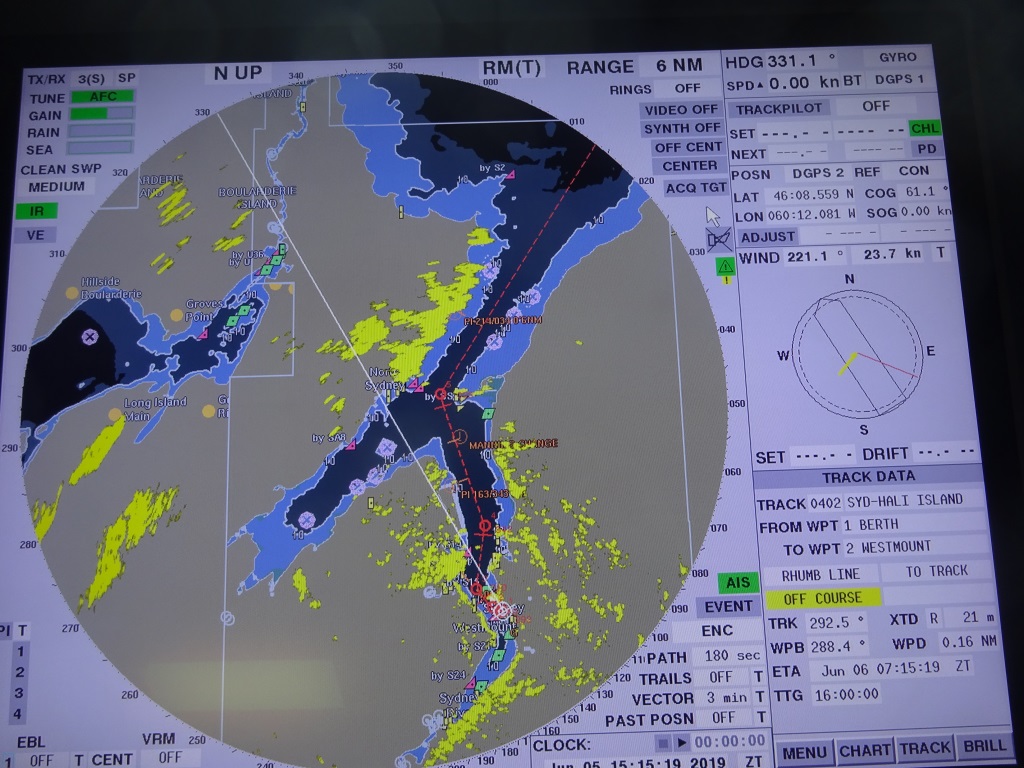 The challenge with Sydney. The town is located deep in a bay and this end of the bay is too narrow to swing around in. and that limits the options for arriving and leaving.

Sydney is located deep in a bay. Not in a fjord as it is somewhat flat on both sides but deep in a bay or estuary created by the river that flows by Sydney. Thus it takes a good hour from the pilot station to the dock on arrival and not much less on departure. To compensate for that hour sailing we have to leave Sydney at 1600 hrs. To make Halifax on time. Halifax also takes an hour to get in as the port is laying deep into the land of Nova Scotia. So while the distance from sea buoy to sea buoy is not that far, it takes a lot of time to get to the docks in these ports. And that is basically also the case for the ports after that Bar Harbor and Sydney. 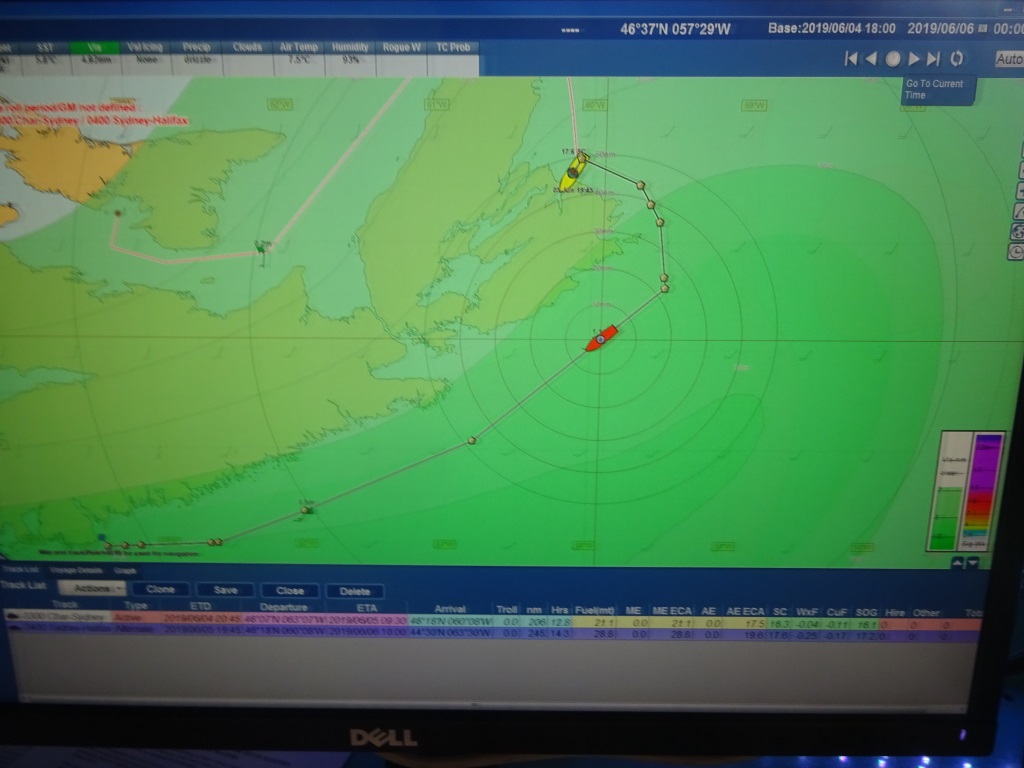 The route via Sydney to Halifax around Cape Breton. This is a screen shot from our wave and current simulator and forecaster. The green indicates that the waves will not be very high and thus we will have a smooth ride to Halifax.

All these things together makes a Canadian Maritimes Cruise a very busy cruise for the ships complement. Add to that the fact that there is only one sea day; it also makes it a very busy cruise for the guests on board. Therefore it is not unusual that guests, who have studied the route, decide to do the up to Montreal and then the down to Boston as well. And those who did not realize it come back for a second time to pick up on the bits that they missed the first time.

So we indeed left at 16.00 hrs. to make sure we would reach Halifax on time and the wind in the late afternoon was strong but as we predicted, the ships thruster power could handle it and we happily sailed away without delay.

Tomorrow morning we will be at the pilot station of Halifax at 06.45 hrs. and we should be docked just after 08.00 hrs.

Weather for Halifax: 13oC / 56oF overcast with rainy and a strong breeze. Not the best of weather but we all hope that the forecast is worse than what we will find on arrival.