We did not see any whales yesterday afternoon or in the evening, nor did we have to slow down on Coast Guard request. All was well in the world. It was even better than well, at least for the guests, as during the day the sun came through and this also promised a sunny day for Charlottetown. Which we had. It was less well for the navigators as sunshine in this area results nearly always in fog banks forming and this indeed happened in the late afternoon and early evening. But it is still early in the season so the banks are not that dense yet. But the moment the sun gains more strength it will be a daily occurrence. The ports will be clear and beautiful but outside where the warm air meets the cooler water, a white wall will greet the ship on each departure.  That is the toll that captains and navigators pay so that the guests can have a sunny cruise in the Canadian Maritimes. But for now the balance is still ok, between good visibility and rain, and the amount of sunshine and VERY low clouds.

Another challenge we have here are lobster pots. This area has an enormous wealth in lobster and thus there are fishermen all around. The lobsters are caught by small steel baskets (called pots) sitting on the ocean floor and they have a line going up to the surface attached to a little buoy.  We do not mind the lobster pots, but we do mind those lines. They can get entangled in the propellers of the ship, especially where the shaft is attached to the propeller. At that location there is a seal which keeps the lubricating oil for the shaft inside the ship. If a rope, plastic or natural, gets entangled too tightly into this area then it might damage the seals.  We would gladly sail around these lobster pot areas but that it is a little bit difficult if they are everywhere. So for years the ships (not only the cruise ships, also the ferry’s and other commercial ships) have been screaming for some regulation that would result in a few, open routes to and from the various ports. 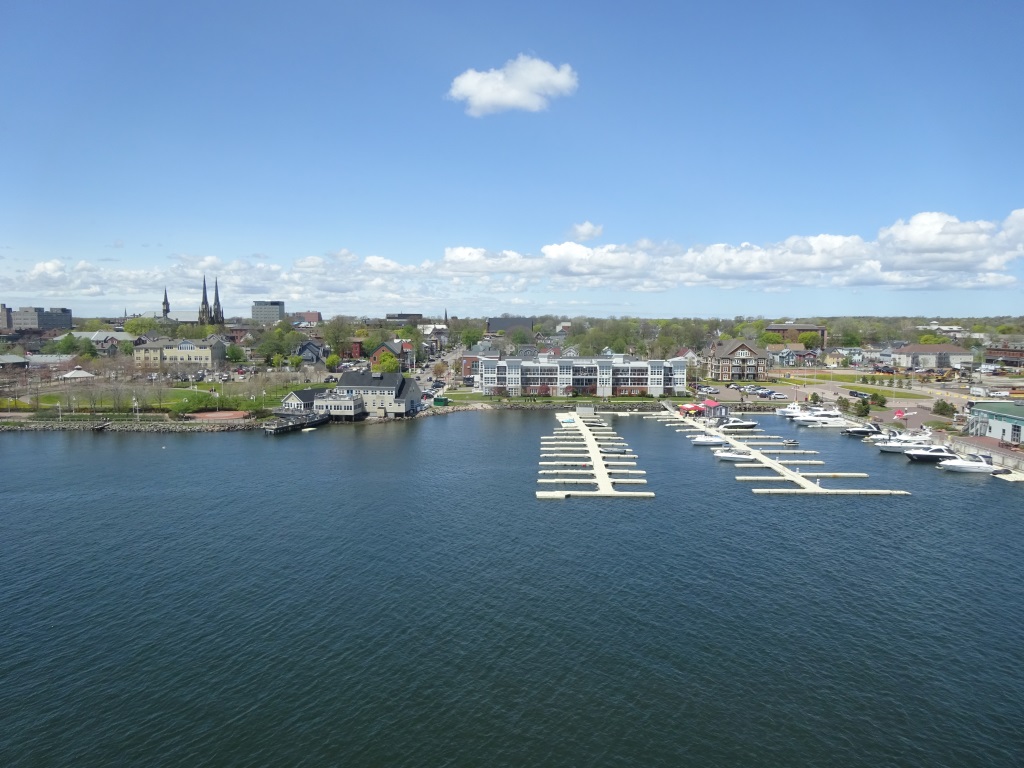 A wonderful sunny day in Charlottetown. the marina is still quite bare as the summer sailors have not arrived yet,

That agreement has now been reached and the navigators tell me that on average there are now open routes. But not always, recently they found a route completely full of pots, while around the route there were no pots. So either a fisherman had been reading the agreement upside down or had decided that lobsters were extremely clever and would sit in the area “protected” by the ships. This a fishermans theory that prevails around the world; as we find fishermen in exclusion zones between Vessel Traffic Lanes, in between rows of wind turbines and sometimes also in pilot boarding areas. Not the best places to be, but if you assume that the fish and the lobsters are also reading the bulletins issued for traffic regulations, then that is where you want to go as that is where the fish will hide. 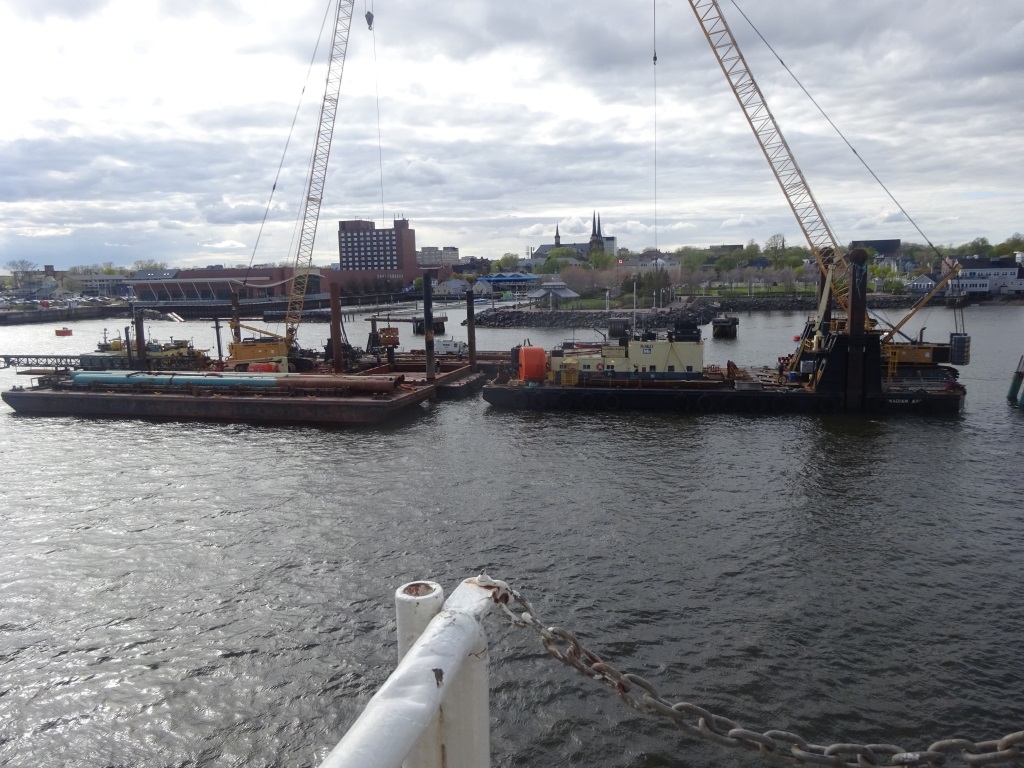 The green pipes on the barge are sunk into the seabed and then filled with concrete to provide the base for a platform with a bollard on top of it.

Charlottetown has only one dock for cruise ships. It was very small when I went there in the old days as we had only a small pier to lay our gangway on. Then they built a larger dock which was big enough for the size of the Statendam and Veendam, although this ships size still stuck out and overhung the pier. Now with the very large ships coming, they have embarked on building extra bollards on either side of the dock. That is currently in progress. In future the port will still only handle one ship but it can be a biggy. They are building very strong bollard/dolphins as it can blow here considerably, and unexpectedly. A sudden unpredicted storm can easily arrive bringing winds of up to 50 knots. And if there is then a cruise ship in port, it is really depending  on strong mooring lines, connected to strong bollards, as bow and stern thrusters cannot handle 50 knots of wind, they can just help a little bit to ease the strain on the ropes. And there are no tugboats in Charlottetown or in the near area. Nearest port is Halifax and that is quite a distance away. 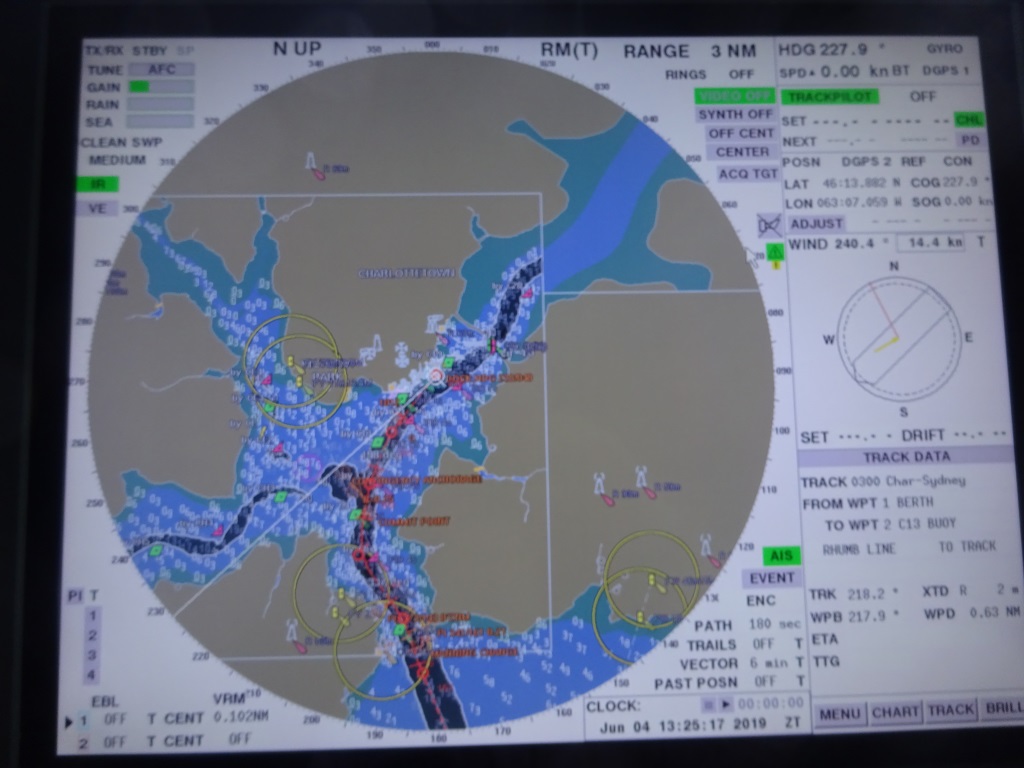 The “bay” of Charlottetown. On the electronic chart it is clearly visible here where the water follows are coming from. Three rivers and the entrance to open sea. The anchorage is the black donuts right in the middle. A ship at anchor here becomes a merry-go-around as it is being pushed from all directions at the same time.

There is the option for a 2nd ship to go to anchor but everybody tries to avoid that as the anchorage is on a spot where three river flows come together. So three flows pushing the ship and in addition there is then also the ebb and flood current and the wind. As a result an anchored ship is never lying quietly behind its anchor but rotates constantly around its anchor. And if there is a bit of wind then tender service becomes extremely difficult. Luckily Holland America has been coming here since the late 80’s and thus we have some sort of seniority rights and thus we should not be “pushed out” by some mega liner.

Tomorrow we are in Sydney, Nova Scotia. The good weather is not expected to last so we might have some rain and some wind. Good news is that it will not be that cold in downtown. 17oC / 63oF we are just keeping our fingers crossed about the wind. The weather forecast does not always have it right here. We do mind if they have it wrong, and there is less wind, as we had today, but we do not like if they are wrong and there is more wind…………………….