At 23.00 hrs. we boarded the St. Lawrence River pilots at Escomins and then sailed up the river for a 06.00 hrs. approach to the port. For that we pick up a docking pilot about 3 miles away from Quebec port itself. We use a local docking pilot as he can talk to the linesmen for the rope configuration etc. once we come alongside. Not an un-necessary service as the local linesmen here belong to the most argumentive linesmen we have during our cruises anywhere. So when the ships want something,  they do not always agree and that makes the port pilot very useful. On departure we do not have one, as letting go the lines does normally not result in too many heated exchanges. I speak a certain amount of French but not Quebecois but this morning on arrival I heard a few choice words which I have to try to remember as they might be very handy for the future. They sounded quite impressive but maybe not to be used in refined company.

The outskirts of Quebec and the villages along the banks of the river really look French, the houses, churches and landscaping could have been imported directly from 19th. Century France. Very picturesque to sail by with a ship in the summertime but  it must be very cold here in the winter when the St. Lawrence is either frozen over or transports large ice flows down the river. Not my cup of tea but if you always lived there it is normal I suppose. Also in some villages you could see that the farmers lived in the town and had their fields and barns higher up the hill. In the village of St. Jean de Isle de Orleans, nearly every house had a tractor in front of the door, waiting for its owner/ operator to wake up from his rest.  This was at 05.30 in the morning and a pity that most guests where still thinking about a new day and not acting upon it as it was a nice view, even while it was raining. But they had the chance to see something quite similar after leaving Quebec. 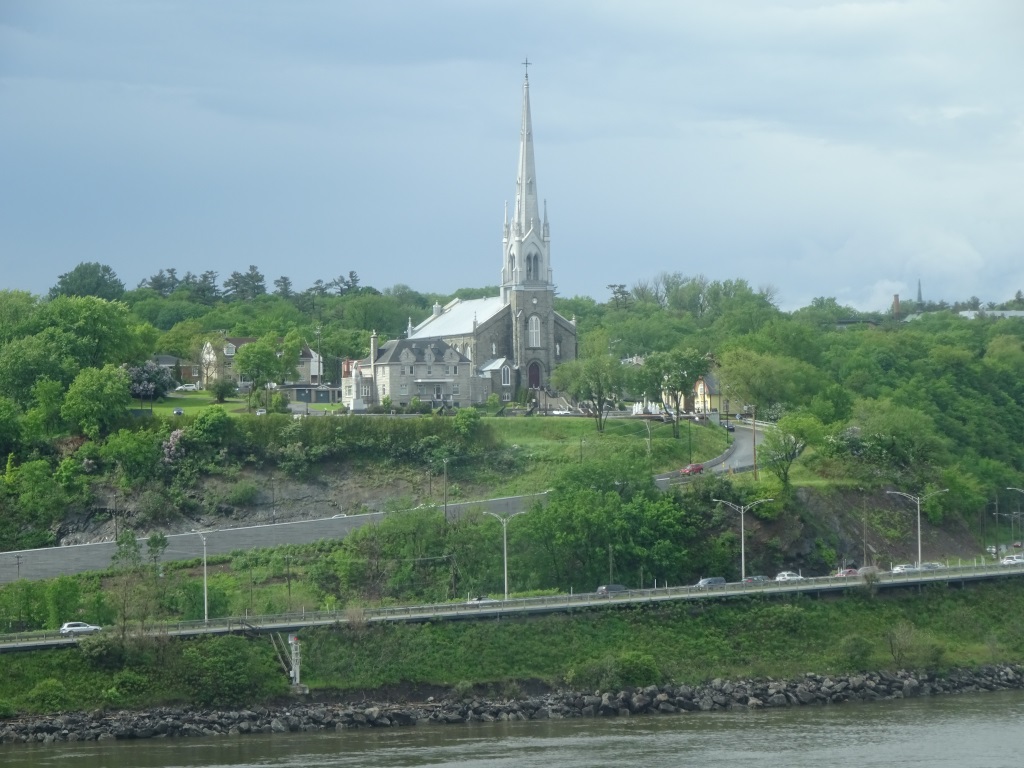 This is a church 15 minutes outside Quebec when going up river. looks pretty french to me.

Quebec had a rainy day, with intermittent showers, which affected the guests somewhat but most of them still went ashore. We had a shorter day to day due to the river height.  Captains are supposed to stick to the company advertised schedule unless there are over ruling circumstances. So instead of 16.30 all on board we had 15.15 all on board because of such a situation. Reason was the window we had for going under the bridge up to Montreal, 20 minutes sailing north of Quebec harbor. The river is still very high and we can only go under this bridge when the ebb tide is helping a little bit to keep the water level down. When it is flooding then the water level is too high. Thus we had until 16.00 hrs. to get under the bridge; any later time worried the pilots as they were afraid that the ship might take a “bite” out of their beautiful bridge with the funnel.  We of course were worried about the bridge hitting our beautiful funnel and making a dent in it. There is a clause in the cruise ticket/contract which allows captains to leave earlier or amend arrival and departure times and today the captain had to do it, otherwise we would not be able to go to Montreal until the next low tide. 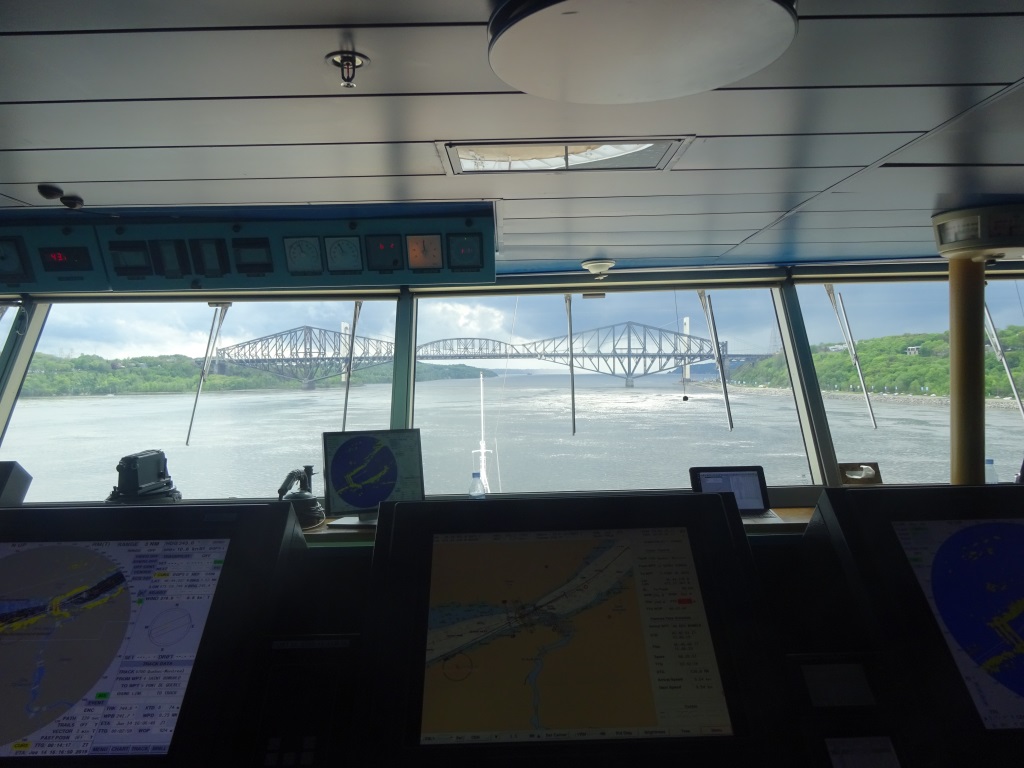 The view from the bridge while approaching the bridge. Once under we had 5 feet clearance. Hence the pilots like to keep on their margins.

But we left on time and with a happy pilot we passed without challenges under the two bridges and the high voltage cables. Tonight around 23.00 we switch pilots at Trois Rivieres and then tomorrow we will be in Montreal. We expect to go to the cruise terminal but it depends on the last minute water height as there is a bridge as well here that might be too low. If so, there is no problem as there is a cruise terminal just outside the bridge as well. We used that one 14 days ago when the water was also too high.

This will be my last blog for a few days. I am flying home to England for one day and then on to the Prinsendam for the final voyage. A voyage to the North Cape. This time not as Fleet Master but as an old Prinsendam captain who will do a number of lectures that will keep the guests entertained as good as possible. My lord and Master Lesley will join me three days into the voyage to ensure that I will not be slacking in my activities supporting the Entertainment Department. An unusual job for a captain but somebody has to do it and a good captain never shrinks away from a challenge; certainly not when it involves cocktail parties and talking about Holland America Line.

Weather for Montreal: quite warm 72oF / 22oC but overcast and showers in the afternoon. 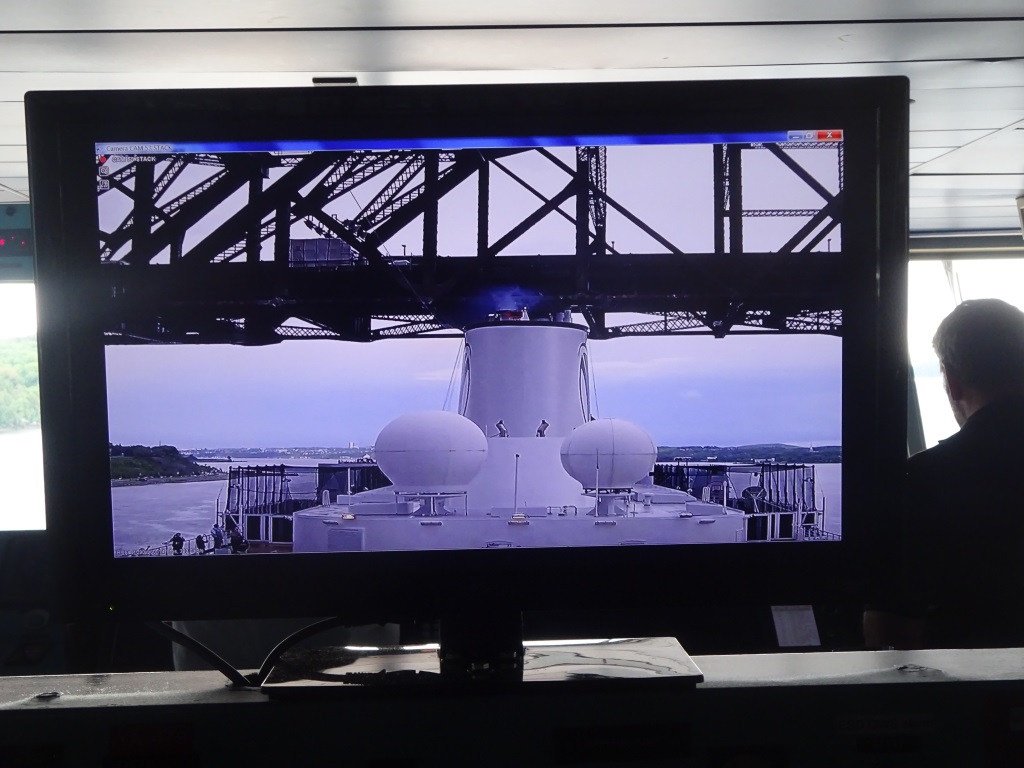 5 feet clearance, we are quite comfortable with that, as long as there is nobody standing on top of the funnel. This is a shot from the camera on the radar mast towards the funnel.