The summer is starting to gear up and we have now had a few nice days in a row. With us in Bar Harbor today were the Independence and American Constitution of American Cruise Lines and the Celebrity Summit of Celebrity cruises.  The first two can carry 100 guests each and the Summit approx. 2200 with some bunk beds filled so altogether with us there were 3700 cruise guests that could have gone ashore to make the shop keepers happy. Even on a Sunday a total 3700 is not that many when compared to St. Thomas, St. Maarten or Nassau but for a small place as Bar Harbor it makes for a very busy day. The port has one very small dock and that should have been occupied by the American Constitution and thus the other one was at anchor next to us. I said should have been as later on we saw that ship also at anchor.

These very small cruise ships can do both deep sea (although not in the bad weather and not for long ocean voyages) and coastal waters and they regularly sail the Intra Coastal water way up and down to Florida or are milling around in the Great Lakes. I spoke to one of the captains a few years ago and he said that some of those inland river cruises were a real challenge, even for that size ship. There being one spot on the intra-coastal waterway where he had to make a 90% turn with the ship, basically by stopping and using the bow thruster. Something he could only do when there was no wind. Otherwise he had to wait; but on the positive side the tour buses could always catch up with the ship while sailing inland. Same as European river cruises. 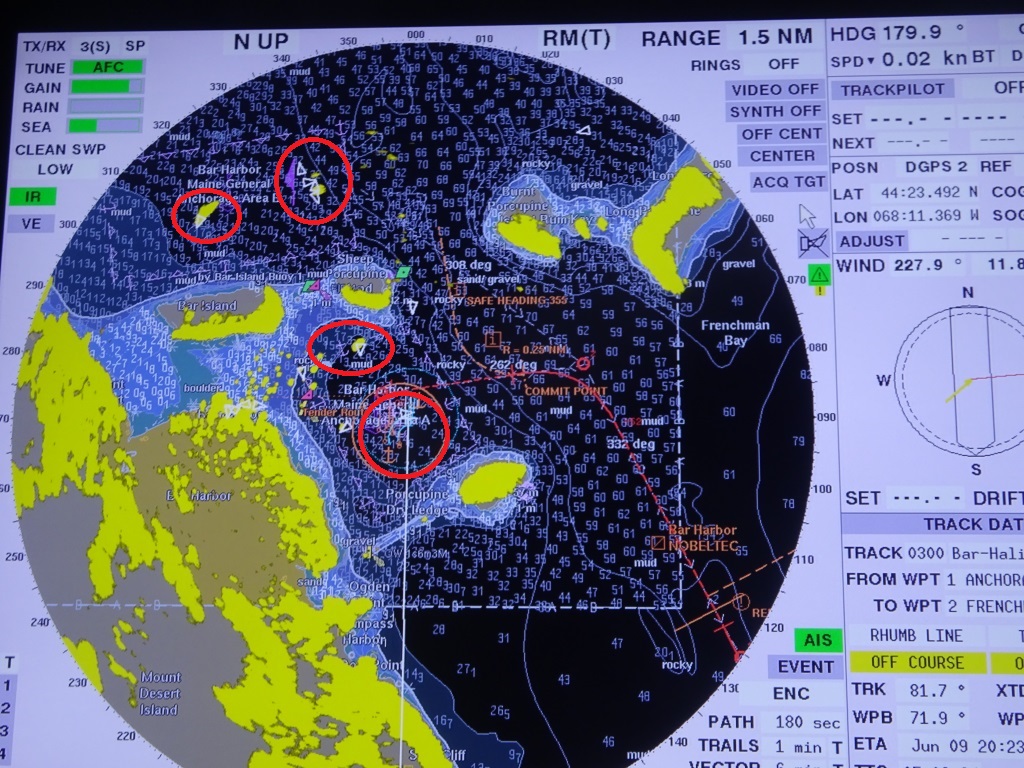 Our anchorage today: To left the American Constitution, top right the Celebrity Summit, middle the Independence, bottom the Zaandam. There are two islands between the two top vessels and Bar Harbor docks, so the ships cannot see where there tenders are going, as described in the text below.

The Celebrity Summit is one of four similar ships of the Millennium Class which were built after the year 2000. With fuel prices low they were fitted out with gas turbines. The logic being that the space saved (gas turbines need about 60% less space than conventional engines) could be used for more cabins and that would offset the higher fuel price of Marine Gas Oil. This did not exactly work out as the oil prices rocketed and the ships were re-engined to more conventional propulsion. 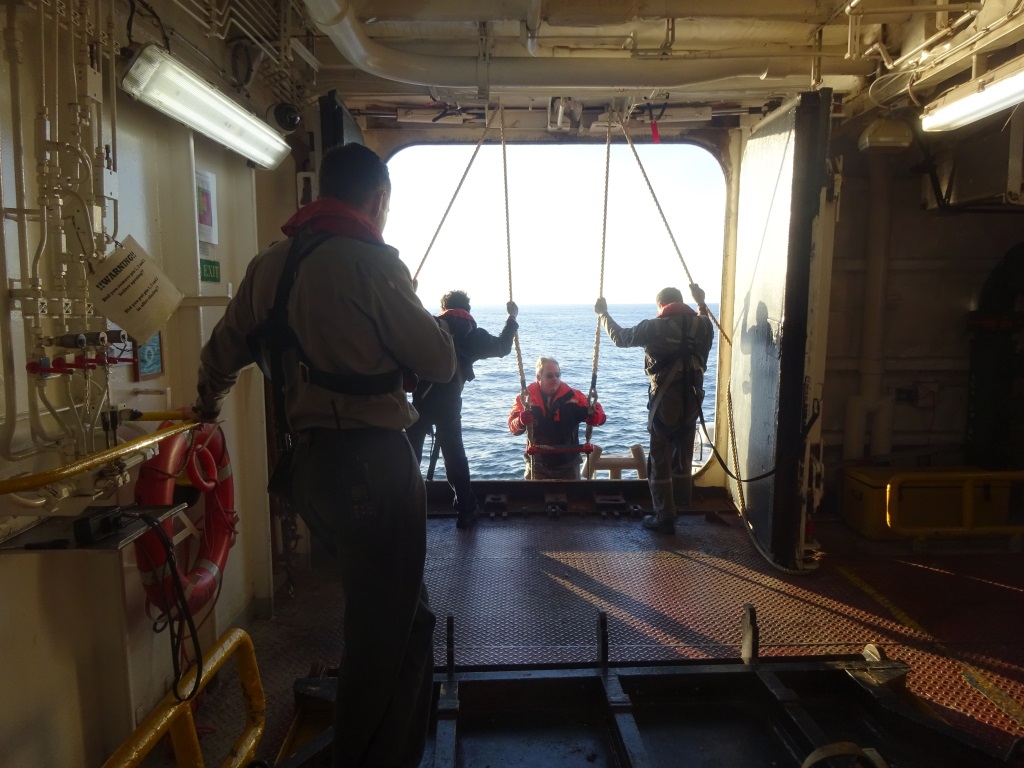 All ships require a pilot. Here the pilot is boarding the Zaandam this morning. Two attendants ensure that the ladder is safe and are there to assist him and an officer is supervising the whole procedure. In this case the officer is the cadet and he is allowed to do this because I am standing behind him as Mentor.

Our anchorage is only big enough for three very small vessels, one medium and one small vessel, or one large one and thus we shared Frenchmans Bay with the Independence while the Summit had to go to the outer anchorage. The good thing about that location is that there is more space, but the bad thing is that the tender distance is longer and you cannot see the tenders near the port as there is an island in the way. You can follow the tenders on the radar as they all have transponders but you cannot keep a close eye on what potential problems there might be out there. From the Zaandam Bridge we can see the whole Tender route and we have one officer on the bridge whose sole duty is to monitor the tender service and to ensure that it is safe. The other officer is taking care of the navigation, which means while at anchor, ensuring that we remain at anchor and preferably in the same location. The bottom of the harbor is mud and rock, and with wind the ship could easily pull the anchor out of the ground. With sand or mix soil sea floors, the anchor would then dig in again but with this thick mud there is the chance that the anchor starts gliding/sliding over the mud and is dragged along by the ship which is “happily” surfing away on the wind.

This is the radar plot of the ship. The dots down was the ship gently moving around the anchor when there was no wind in the morning. Then the wind picked up from wind still to a gentle breeze and the ship stretched behind its anchor. That gives the larger number of dots/plots. You can imagine what could happen if the wind would increase to gale force.

This was a very nice and sunny day and the weather is set to continue for tomorrow when we are in Halifax. Partly Cloudy with temperatures of 18oC / 66oF and very little wind. Slightly cooler then today but that is not bad as it might just keep the fog away. (………..only just). We will not be alone as we will be together with the Norwegian Dawn. The cruise season has well and truly started.