It is my personal opinion that for a compact large city, Vancouver is one of the nicest ports to sail into, together with Venice and maybe Naples. With compact I mean, you enter and there is constantly something to see. New York is also impressive with the Verrazano Bridge, the Statue of Liberty and downtown Manhattan but it is all far apart.  Same for San Francisco, again an impressive bridge, followed by Alcatraz but is takes place over a considerable distance. Vancouver only takes 30 minutes from 1 mile before the Lions Gate Bridge to the dock and in those 30 minutes there is a constant impact on the senses. I have never heard anybody complaining on the bridge about sailing into Vancouver while normally, a long sail in gives rise to grumbles among the navigators; and they are very good in grumbling. (Not to say moaning).

So it was with pleasure and enjoyment that I was standing at 06.00 on the forward mooring deck teaching the cadet the finer tricks of keeping oversight on the mooring process and getting him in the mind set of: do not be negative but expect things to go wrong = expect the un-expected as Murphy has a permanent cabin on any ship…..with the aim to impose his law. We have two deck cadets and two engine cadets on board. In both departments one male and one female. The Dutch male deck cadet is on his last two weeks so the focus is on him and the Kiwi Lady Cadet has just come on board and is still finding her sea legs. The Bo ‘sun is always leading the sailors and knows exactly what he is doing, normally much better than any officer forward so that is not the reason an officer is present. It is for communication and safe working operations.  Thus a junior officer has to learn to communicate in a precise way and with as little words as possible. Appropriate radio silence is a great safety tool and thus messages should only be transmitted when needed and as much to the point as possible. 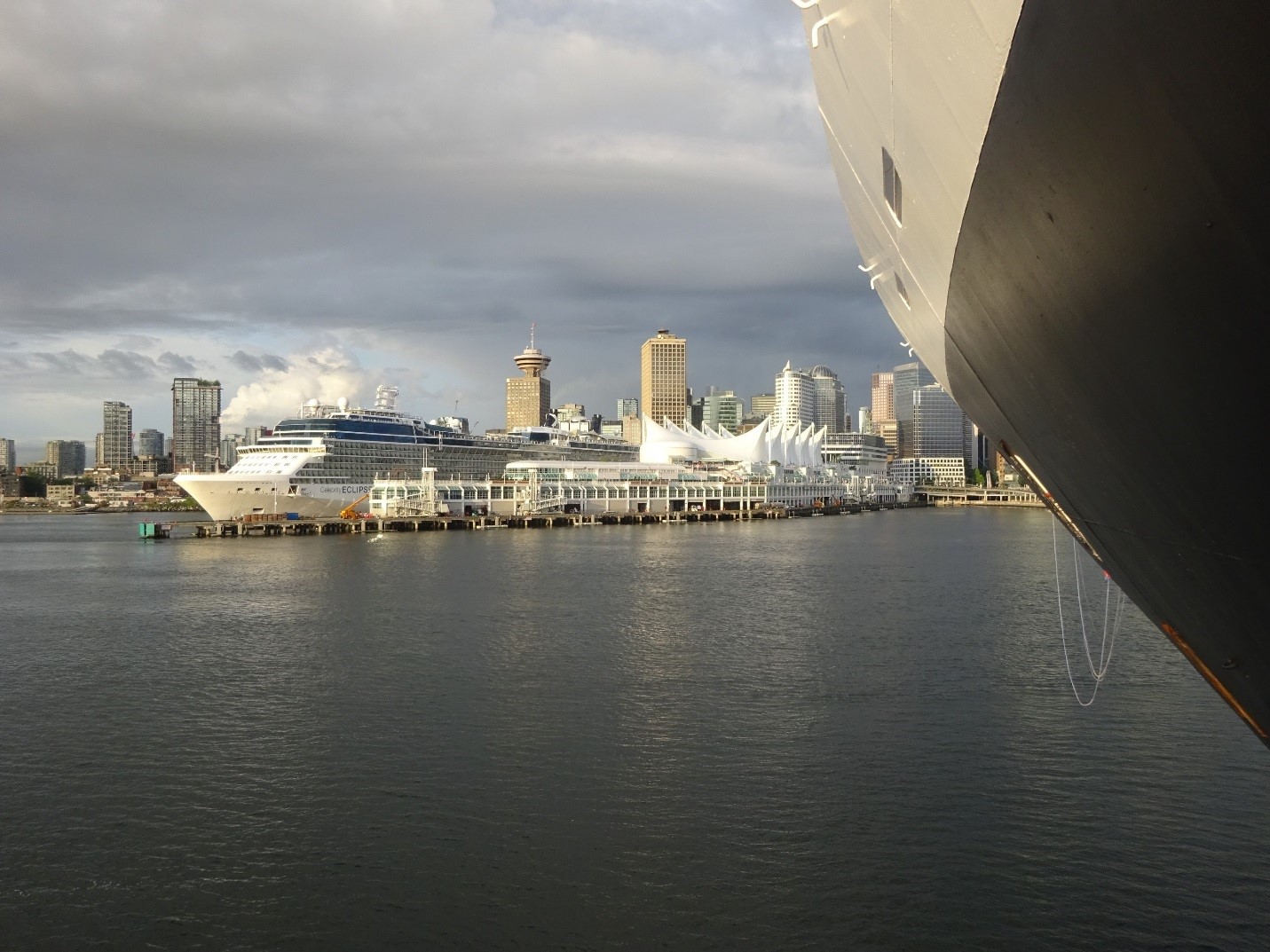 Canada Place Cruise Terminal as seen from the port side mooring platform. The Celebrity Eclipse is in the process of docking and we are next to go in.

Safe working is another thing that has to be learnt. It starts with creating the right environment. A good example we had this evening. The cadet had made a safety round over the mooring deck and found everything in good order. There was a loose coil of hose on deck but he did not see it as an issue, you could easily step over it. So I posed the question what if you suddenly had to go quickly from one side to the other side? Not running but walking as quickly as possible, what happens then to the hose obstacle? It becomes an issue as it either will slow you down or you might get your foot entangled in it. A big chance of it happening? No but it can and Murphy will try to make it happen. Store the hose out of the walking areas and you have mitigated a potential near miss or not so near miss but an accident.

A cadet is young and positive, while an older officer is becoming a bit more cynical of what can happen as he/she has seen things happening in the past. It is called experience and you cannot start early enough with trying to get new officers see the bigger picture.  Thus I have no problems with going on deck with the cadet, because what he learns now might save his bacon one day and also that of the Captain on the bridge. 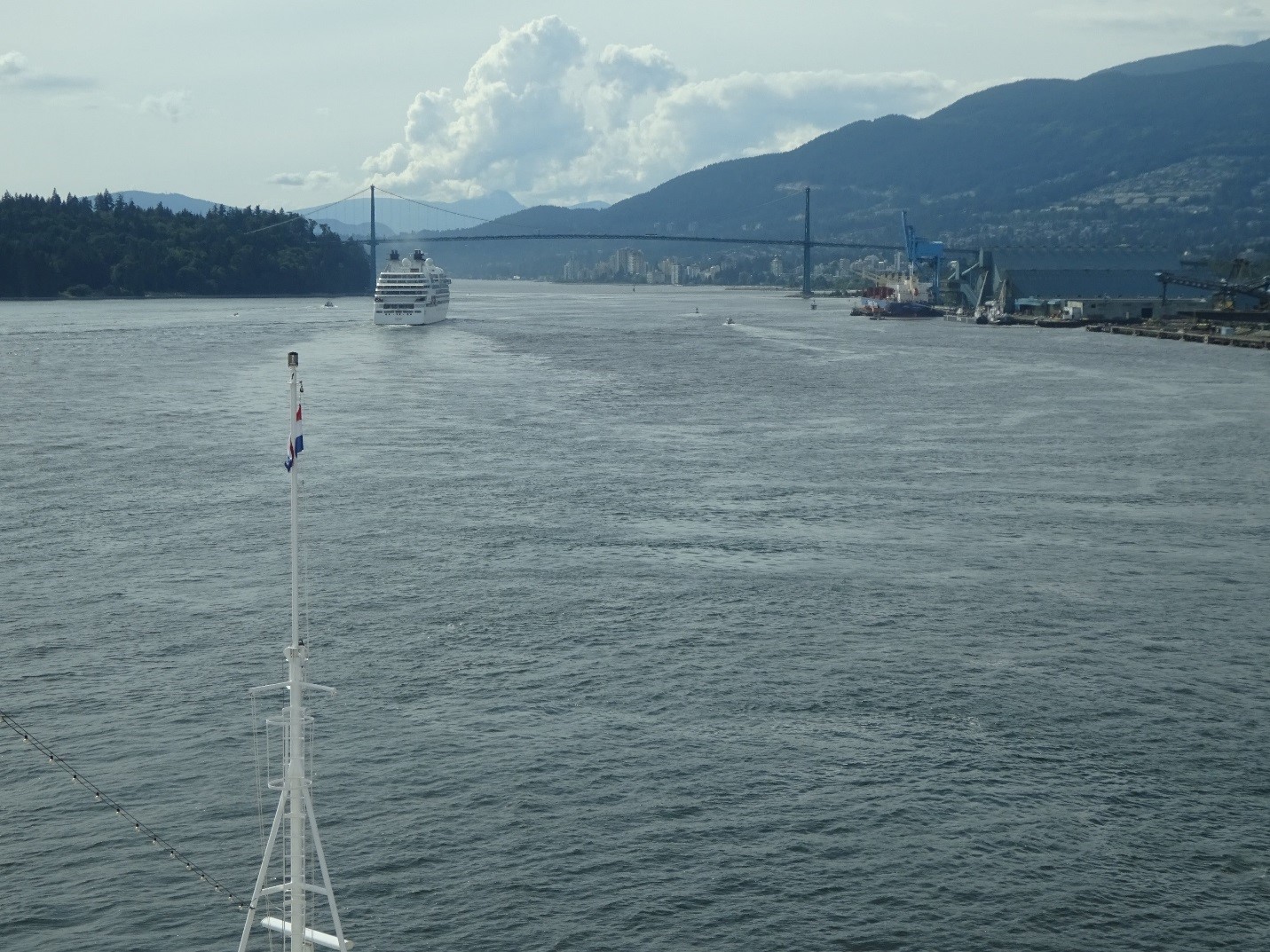 Departure sailing under the Lions Gate bridge with the current increasing  more and more as we come closer to the narrow part. In front of us is the Seabourn Sojourn which is slightly to the south of the normal track to compensate for when it will get the full brunt of 4 knots of current , when coming around the corner while making the course change from  312o to 287o under the bridge.

We arrived at maximum tide this morning and we also departed at maximum tide in the afternoon. Lucky for us in both cases the tide was against us; 4 knots to be precise, and that is better than a following current of the same strength. In open waters we love following tides as it gives a free push in the back, gives extra speed free of charge and thus saves fuel. But with current in the back the ship can start to surf and becomes harder to steer, not nice in confined waters. In the port of Vancouver the maximum speed is 8 to 10 knots and then 4 knots of current is 50% of that speed. It can make it quite hard for the Helmsman to keep a straight course. With the current against you, you push into it and you can always give a kick ahead on the engines to push harder into the current but you won’t be gliding off your intended track. The current has to make a real effort and the helmsman has time and options to easily counter act that. 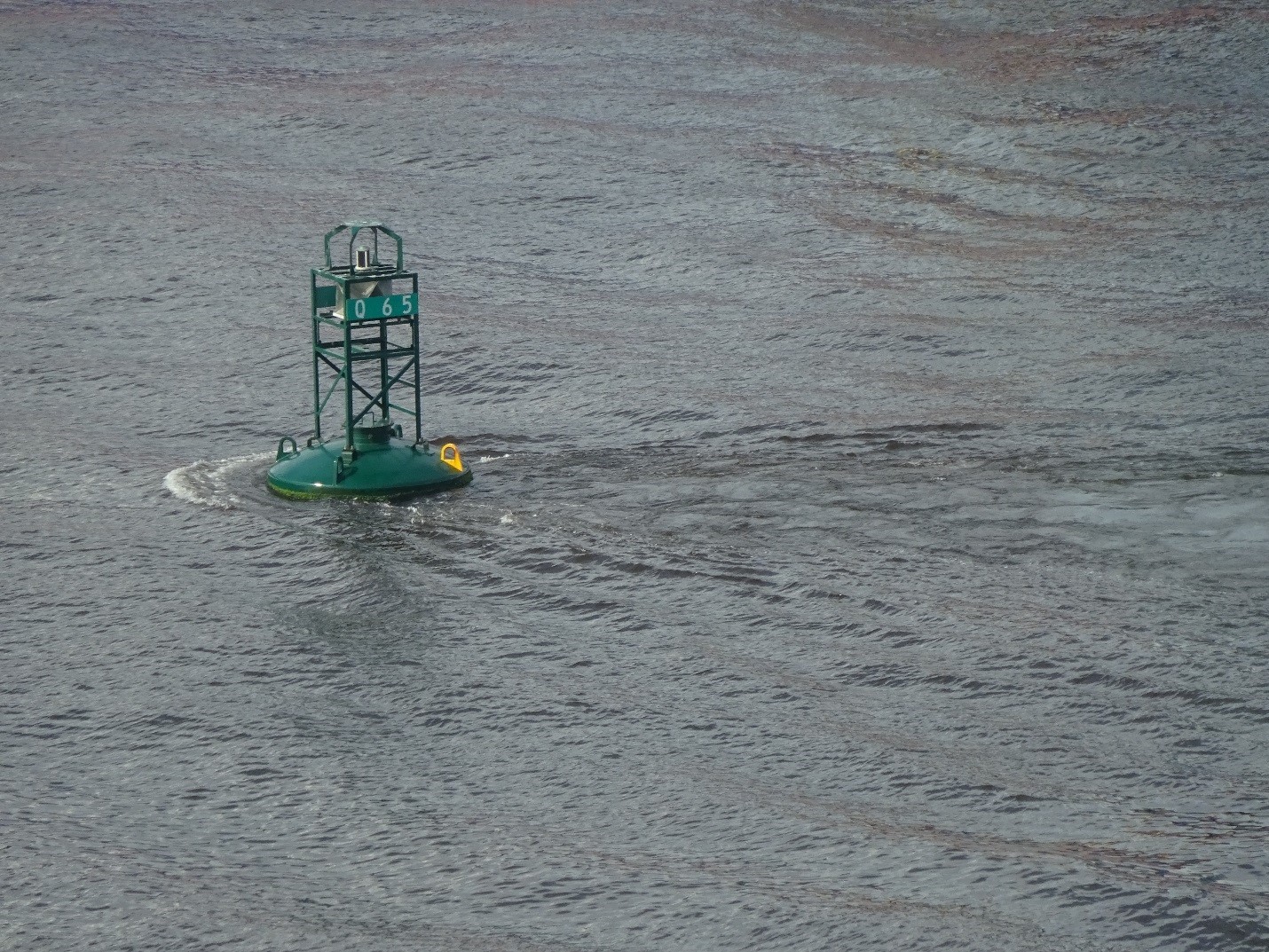 The green buoy just inside the bridge. You can see it’s track also on the photo above next to the Seabourn Sojourn. Here we  have a good 2.5 knots running in the still fairly wide channel.  To say it with Kiplings poem The Bellbuoy:  I dip and I surge and I swing
In the rip of the racing tide,
By the gates of doom I sing,
On the horns of death I ride.
A ship-length over side,
Between the course and the sand,
Fretted and bound I bide
Peril where of I cry.
Would I change with my brother a league inland?
(Shoal! ‘Ware shoal!) Not I!

Thus with swirling currents around the ship we arrived and we departed from Vancouver. Now we are heading north for our next cruise to Alaska. Seymour Narrows s is tonight around 23.30 hrs. so our first chance for the “window of opportunity” is 23.00 hrs.

Weather for tomorrow looks good. Partly Sunny with noon temperatures around 61oF / 16oC out of the wind. Although we are not expecting that much wind.