There is a lot of confusion over what the Inside Passage exactly is as there are so many routes.  Holland America tries to show as much of the Inside Passage as possible but it depends on the available time frame and what we can do then. And we can do less than in the past. The main focus point is the need to make Seymour Narrows on the slack tide. This is a narrow channel north of Discovery Pass where the tides rush through at any time except slack tide, the moment when it goes from ebbing to flooding. At maximum flood or ebb, there can be as much as 14 knots of current and then a ship cannot get through safely. This there is only a certain length of time, a window of opportunity, when the current is weak and the ship can sail through without being pushed all over the place. That window is normally between 4 knots of flood and 4 knots of Ebbing tide. Most of the time we go through when it is less than three knots.  We are not the only ones waiting for this window, so there is a whole line up of cruise ships, cargo ships, tug and tows and sometimes yachts who also want to go through at that time.

Thus it is important that the ship is there, or nearby, so it can line up to be the first, or whatever the pilots among themselves arrange, so everybody gets through. Cruise ships are highly maneuverable and go through when there is still some current running, so the real slack tide = no current, is left to barges and log tows. Missing the tide means that the ship would be several hours late in Vancouver and with change over day that is not a good idea. Flights will be missed, embarkation starts late and it has a knock-on effect as the ship will then also miss the tidal window going the other way (northbound) as there is no option to make up lost time. The Seymour Narrows tide regulates the schedule.

Seymour Narrows is the the smallest gap between Vancouver Island and the Canadian mainland and the tide pushes enormous amounts of water through.

The tides move about 50 minutes every day and thus we have to re-arrange our transit schedule each cruise. So our Passage time can be as early as 20.30 or as late as 01.00 in the morning depending on how the tide moves and how steep the tidal window is. When it is Neap tide, then we are sometimes able to go through at any time but when it is a Spring tide, the window might be very small as the current goes very quickly from ebb to flood or vice versa and then build up quickly in velocity again. Thus all eyes are on the slack tide time. Tonight Slack tide is at 22.19 hrs. and the maximum possible window is between 21.30 hrs. and 22.50 hrs. So the Westerdam is aiming for roughly the slack tide time and then will keep adjusting the ETA depending on the information the pilots receive from traffic control. 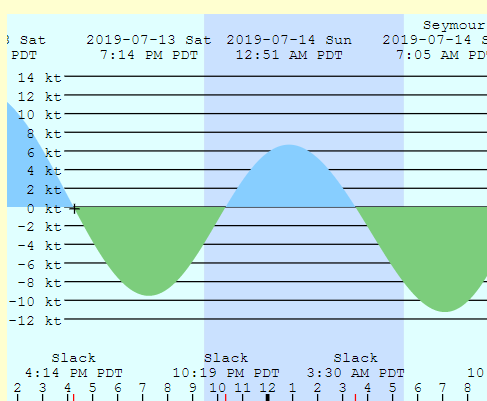 The current graph for tonight.

Based on this focus time in the Narrows, the captain has to decide which route he can take for showing the Inside Passage. Not all routes are open anymore as with the ships getting bigger some of the most scenic passages are too narrow or would become dangerous with too much traffic. Thus locations such as Boat Bluff have to be left to the smaller cruise ships. So the captain has to balance the speed to maintain to make it on time, with what routes there are available and whether there is something to see at the time when we are passing by. Not much use to be somewhere scenic if it is in the middle of the night and all the guests are in bed.

Thus today, because we have a 2200 tide, the best route is to do scenic cruising in the afternoon and early evening when there is something to see at times when the guests are focused on it. Thus we will sail through Johnstone Strait in the late afternoon where there is a chance of seeing Orcas and Whales and where the mountain ranges are coming close enough to call it scenic. 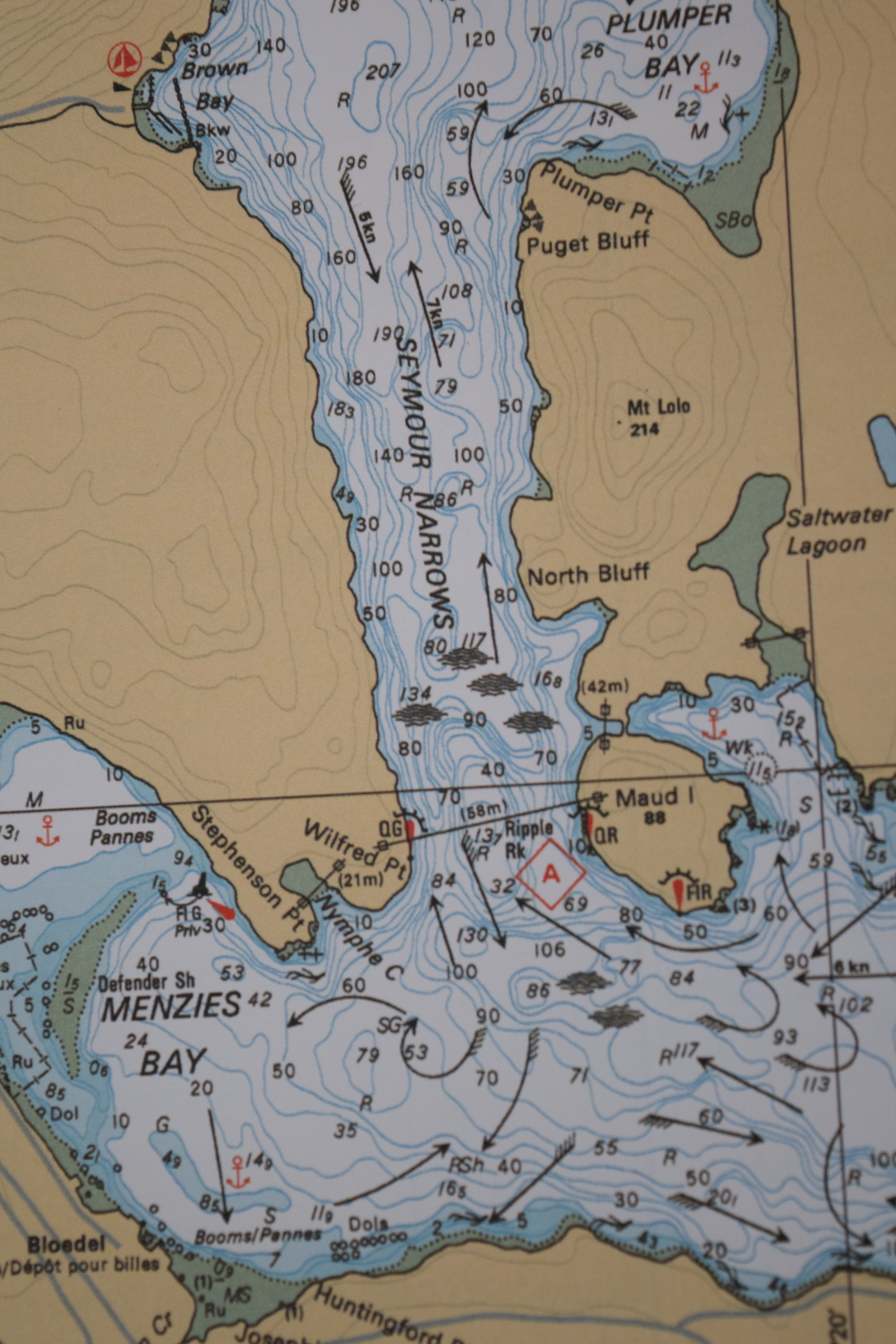 If you look at the tidal arrows you can see that it is quite a nasty place with the current swirling in all directions. Hence we have to go near or on sack tide to ensure that we can deal with these tidal rips.

And that is what we are doing today. Although the day started grey and overcast it cleared during the day and thus it was a good afternoon to see some wildlife and the beautiful scenery of British Colombia. So far we have seen Dolphins in Queen Charlotte Strait, some whales and I thought I spotted a dorsal fin of a male Orca but I could not be sure as Orca’s are normally traveling in Pods so there should have been smaller fins around as well. The Bridge tries to make announcements when there is something to be seen but with wildlife that is not so easy. So this morning we had a very disappointed 3rd Officer who had laid all his heart in a very nice announcement about dolphins only to see them all diving under the moment he made the announcement. And that is the “devil you do and the devil you don’t” of announcements. The Guests like to be alerted about wild life but will complain when they run to the deck and find that the subject of their excitement has decided to dive under and disappear. It takes some experience to start discerning patterns in the wild life to see if they will dive or if they will play on some more. And even with experience you do not always get it right. Certainly not with Dolphins.

Tomorrow we are in Vancouver, docking at our usual spot on the West Side of Canada Place, and we should be alongside by 07.00 hrs. It should be a beautiful Vancouver day, sunny 72oF /22 oC. With a little breeze and no rain. A perfect day, except my favorite bookstore Macleod on West Pender does not open on Sunday anymore so there is my excuse gone for going ashore.

Note: For those readers who are interested in which captain is where, I have just updated the schedules, which can be found under the tab: Current Captains and Their Schedules