Another day, another port and today that port was Juneau Alaska. Capital of the Alaskan State and also the shopping capital for the cruise ships. Although Skagway is trying very hard to beat them, they still do not succeed as Juneau has more/bigger ships in port and for a longer time. Although that was not the case today. The Franklin dock was vacant in the morning but was filled in the early afternoon by the Carnival Legend but then the Norwegian Jewel who was there in the morning left as soon as the Legend had lined up at her berth. As both ships are about the same size, the amount of shoppers in town remained about the same. Behind us was the Celebrity Eclipse and that made the Westerdam the smallest cruise ship in the port. The sort of thing that can you give you an inferiority complex but then we were the only “blue boat” in port and thus the whole world could see that we were different. 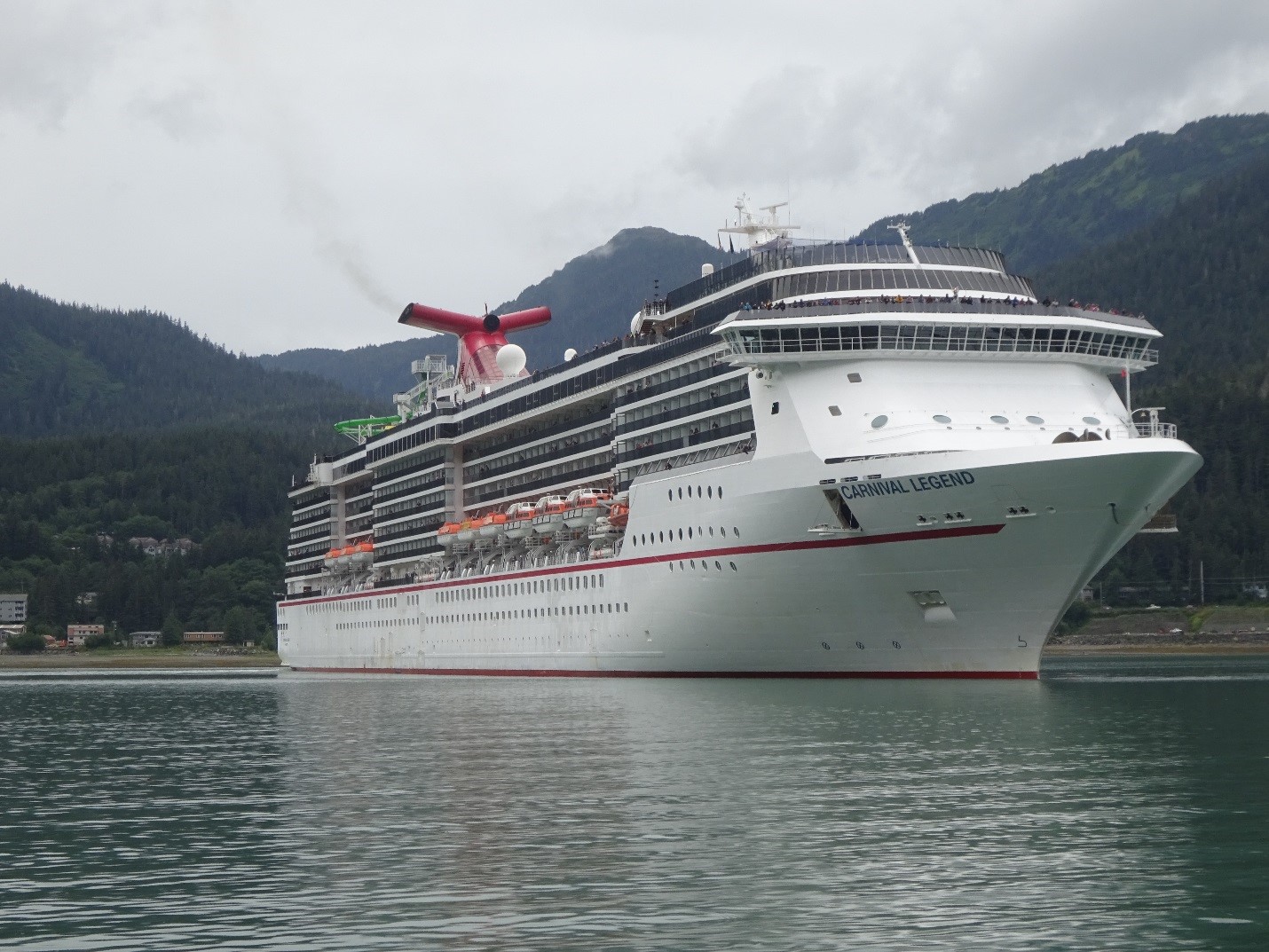 The approach of the ms Carnival Legend to the dock. This photo was taken from the tender during the tender driver examinations.

Last week the Azamara Quest was in and she also has a blue hull but it is a different blue. The hull color paint that we use “Holland America Blue” is especially mixed by the paint company and is thus unique to only Holland America. But as there is black, black and black, there is also blue, blue and blue and as long as the blue of the other companies is not HAL blue there is not much we can do about it.  The Big Red Boat Company who sailed for years and years out of Fort Lauderdale had a similar patent for their red but they never had competition as there has never been another company that fancied to have red hulled ships as well. But blue seems to be more coveted and thus we have quite a few cruise ships sailing around in various shades of blue. On our ships we just think that these companies must be very envious of us and thus want to emulate the Holland America quality of cruising. 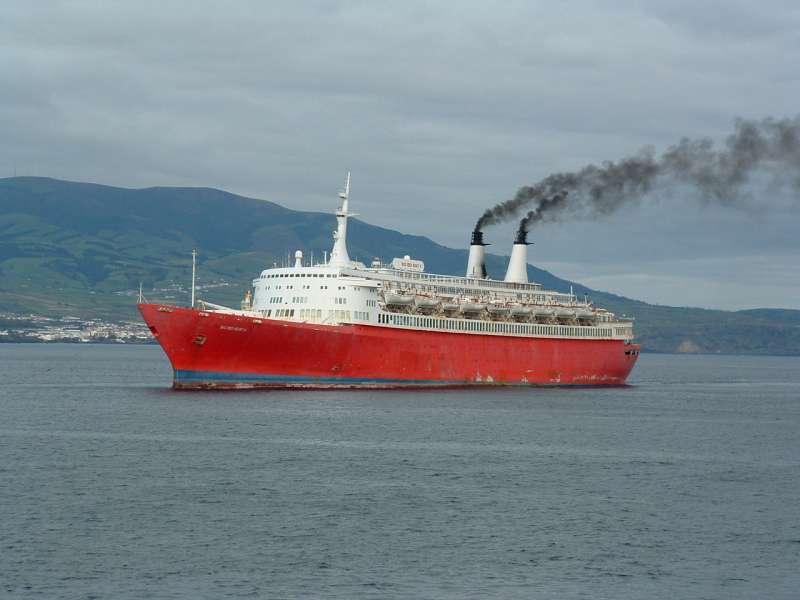 One of the Big Red Boats which was in an earlier life the Eugenio C. Seen here in a fairly sorry state as she was on her way to the scrapyard.

Having a white hull has its pro’s and its con’s. It saves about 10% in A.C energy to have a white hull as it reflects more sunlight than a darker color but it is much more difficult to keep clean and pristine. You do not see so many smudges and stains on a blue or black hull, although I do not think that our wise fore fathers at Hal in 1973 were thinking about that. No they just wanted to stand out from all those white mass market cruise ships on the 7 days Caribbean circuit. Now if you can paint and touch up in every port that you visit, then it is an easy gig to look nice in white. But there are many ports in the world where outside painting is not allowed or where the weather does not make it a viable option. Read here, in Alaska, where there is a fair chance that your freshly applied paint is washing off and going directly into the water. The first is not nice for all the work that you do, the 2nd is a no, no, as we do not pollute the ocean. That is why in Alaska the Staff Captain wisely focusses on balcony maintenance as those area’s stay mainly dry. 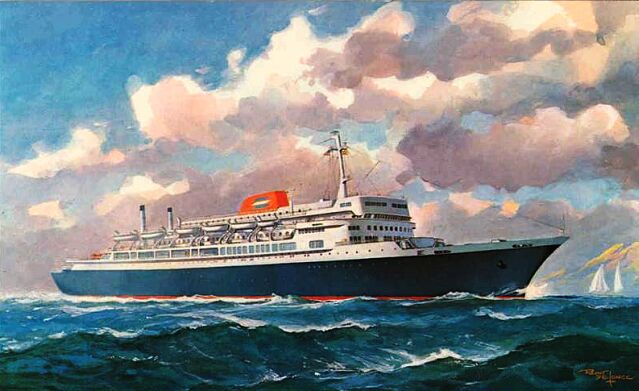 An artist impression from 1973 when Holland America decided to go to a blue hull, orange funnel and three “waves” as funnel logo. The waves were there as Holland America was going to make “waves” in the cruise industry. And orange because it is the national color of the Dutch.

Another color thing is the various colors of the lifeboats that are out there. Solas (Safety of Lives at Sea) regulations do not specify what colors safety equipment has to be. It just states it shall be clearly visible. Signs (red for safety, green for life saving) are standardized as are the pictograms on those signs but not so for the lifeboats. And thus we see orange (Holland America) Burgundy/purple (NCL), Yellow (RCI and Disney) and white (which is allowed as long as the top has a bright color). I have always been a proponent of having fluorescent red, as that really stands out, but I was advised by a paint expert that the fluorescent paints that are out there are not long term UV resistant and would turn into a pale pink in due time. I do not think there is a cruise ship company out there who wants to go “pink” with their lifeboats. Some other companies do not have that trepidation and thus is there a container company who has gone pink all the way and uses it to very good advantage to stand out in what is considered a very masculine world. I do not think that they have extended “being ONE in pink” also to the uniforms of the officers on board, but if so, I would love to see that.

Our sailors were cleaning and touching up the ships paint all over the ship but all in areas where the occasional drizzle could not affect them. And then in intervals they had to leave their paint roller for a while as they were called to my tender as it was exam day today for the tender driver refresher training. In Alaska the ship docks everywhere but as the Westerdam goes to the Far East this winter that will not be the case once there. Hence shaking everybody’s memory bank is not a bad idea.

Tomorrow we will be in Ketchikan, from 11.00 hrs. in the morning. We cannot be much earlier as the distance to cover is too long, Ketchikan will be the final port of this cruise before we return to Vancouver.

Expected Weather: 60% chance of rain in Ketchikan. So it could be a lot worse as the locals claim that it rains all the time. Also the temperatures are good 16oC/61oF. So not much to complain about.