Today we visited the Ketchikan I recognize; living to its title, the rainy capital of the world. Still it was not that bad, the 50%+ amount of rain came down in drizzle and light rain and not in downpours. Plus there was hardly any wind and that kept the temperature reasonable. And thus most of our guests marched happily off the gangway to sample the delights of Ketchikan and beyond. (Not that far beyond as the roads do stop at a certain moment) Luckily for watching wildlife you do not have to have dry weather as the wildlife is there regardless of the weather. All the berths were full today at least until 13.00 hrs. when the Oosterdam left; followed by the Norwegian Bliss but she was replaced by the Celebrity Eclipse.

We even had a ship at anchor today and she had to anchor very far out as the normal anchorage had to be left open for the Bliss as she went south and had to swing at this anchorage area. I do not think that the captain of the Seven Seas Mariner was impressed with that one as it called for a very long tender distance. Then this evening when all the day ships has left, the Azamara Quest is coming in for an evening call. I hope that the guests will find the night life in Ketchikan exhilarating. The rain did carry on, so they will also have an authentic Ketchikan experience.

In the meantime life on board the Westerdam continued with training, maintenance and drills. I had another little nasty thing up my sleeve today an un-expected Man Over Board drill. To be politically correct it should be called a Person Over Board drill and we could also call it a Woman Over Board drill as lately there seem to be more women plunging into the water than men. But in the traditional world of sailing we still call it Man over Board or MOB. After discussion with the Captain I had this planned for 13.00 hrs. without anybody on board knowing about it but then the Norwegian Bliss was leaving and they had a USCG escort. 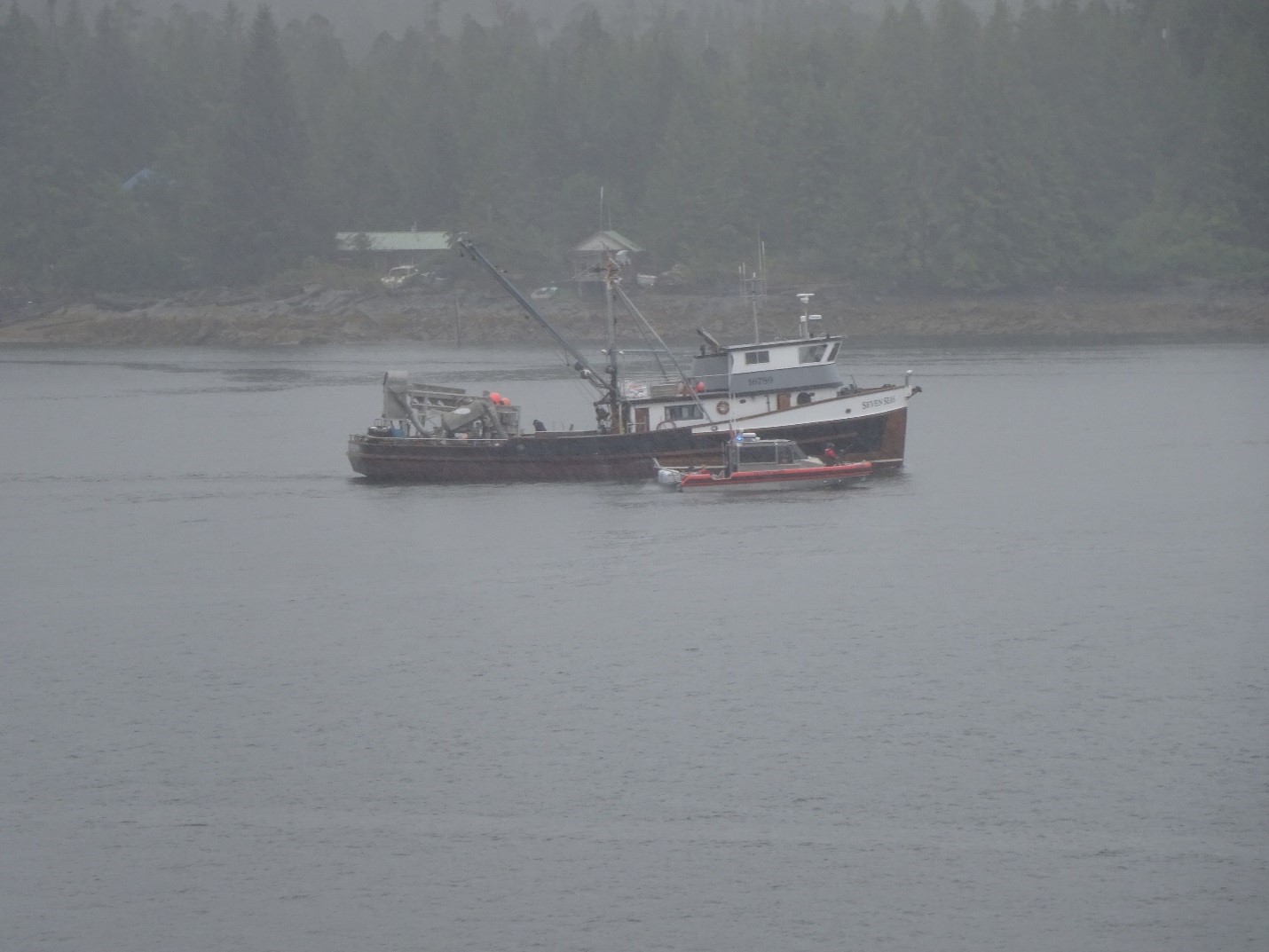 A fast USCG boat in the process of diverting a fishing boat from its intended track as the Norwegian Bliss was about to depart.

The USCG has this program to train their fast boat crews in escorting large cruise ships in and out of USA harbors. While they are doing that, they maintain a safety envelope around the ship. To achieve that, they stop all traffic in the port regardless whether that traffic comes close or not. When any floating thing seems to be sailing in the general direction of this imaginary envelope, it is enough to set the boats off. They looked like dedicated shepherd dogs who are running highly excited around a flock of sheep. They do a very good job and I admire the skills and dedication of the USCG people. Especially as they are always there for us when needed.

It was just that I did not need them here today because throwing a dummy in the water while the USCG boats were doing their job would not be a good idea. I do not think that it is anywhere in their paperwork and scheduling to have a protocol of a Westerdam tender sail into their safety envelope to exercise a M.O.B situation. So I decided to wait until the Norwegian Bliss with escorts had disappeared into the rain.

When somebody sees a person going overboard then the survival changes very much depend on how fast the happening is reported. The longer the delay, the shorter the survival window. If the person is still alive after impacting with the water, then hypothermia will set in very quickly especially in Alaskan waters. 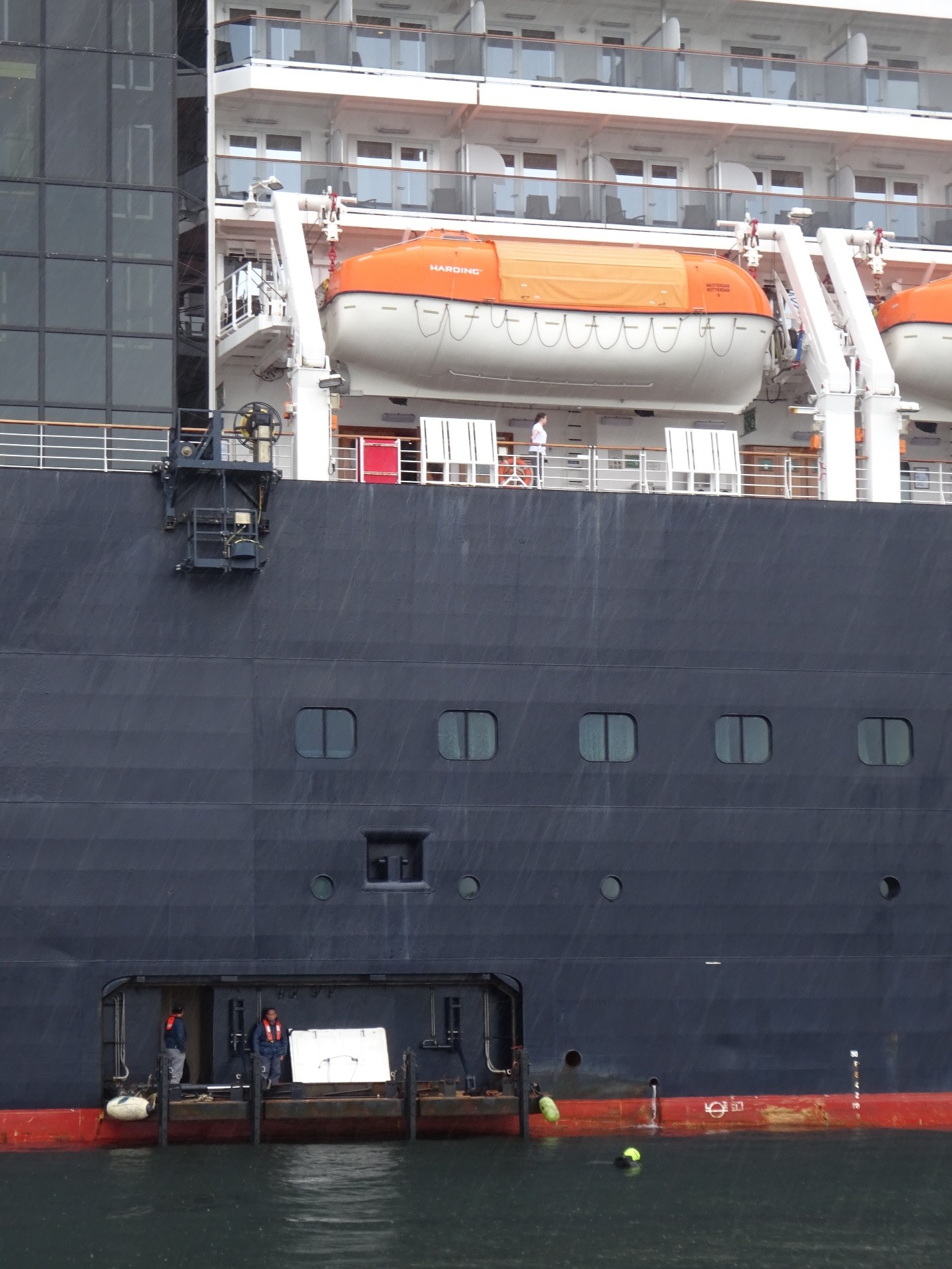 Our Front Desk Attendant on deck pointing out where Mr. Dummy (with the yellow head) is floating by. I hope she did not catch a cold as she ran directly from  her warm office into the chilly air of Ketchikan. But she did a very good job. The two sailors on the platform were not involved in the drill so they were told to stay standby.

So Mr. Dummy went in and we alerted the ships operation by calling 911, which is the Front Office, and they called the bridge. Then a Front Office Team Member came running out on deck and saw the casualty. Then two things happened, a. She threw a life buoy which might be useful for the casualty if still conscious but it is very helpful to keep the person in sight and b. The person then kept the casualty in sight. The latter is important and not easy as it can be hard to see a small person against a background of blue rolling waves. 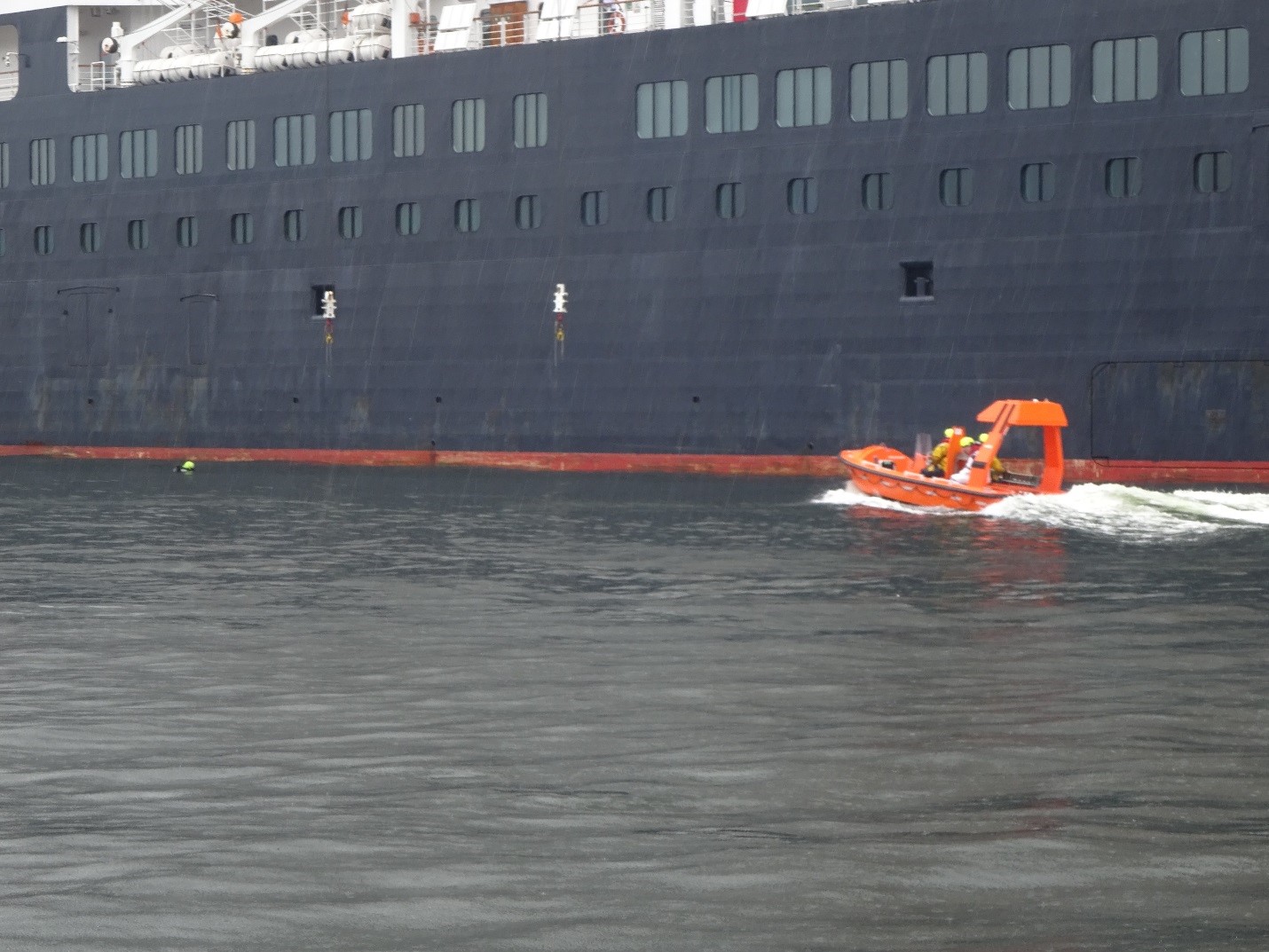 The Man Over Board Team in the Fast Rescue Boat on the way to the person who has fallen overboard.  Mr. Dummy was slowly drifting along the ship to the north, pushed by the tide. The two white things hanging in the air are the releasing blocks of my tender, from where I took these pictures.  I had a tender lowered to ensure that no other boats would run over Mr. Dummy as it is quite busy in Ketchikan with small craft.

Once the Alarm was sounded the M.O.B team came running from everywhere and launched the Fast Rescue Boat. (The USCG has boys with toys but our boys have them as well) The fast rescue boat is a specially designed boat that is easy and quick to launch and makes a good speed. The boat is manned by an officer for driving, a quartermaster for lookout and an engineer for the machinery. They have a little cradle on board that they can put it under the floating person and then scoop that person in board. It all went well but it caught a few people right in their afternoon nap due to my delaying the starting time.

We are now sailing back to Vancouver and will be in the British Colombian Inside Passage for most of the afternoon and evening. The more south we go, the less rain we should have Vancouver should be another sunny day.