The weather remarkably improved once we crossed the border near Triple Island Light house, where we also embarked our Canadian Pilots. They will come on duty around 13.00 hrs. when we enter the Inside Passage. As explained before our schedule is dictated by the slack water time at Seymour Narrows as we have to get through otherwise we would not make Vancouver timely. We might have some guests on board who could not care less as they will continue travelling with us but the large majority has to get home as real life is beckoning again. We do not have to be there exactly at the moment that the Ebb is turning to flood but we have to make the tidal window. Tonight it starts at 21.10 hrs. and then goes via the slack tide moment of 21.09 hrs. to 21.30 when the current rises above 3 knots again. The good thing is we can be a little bit later than 21.09 hrs. as once the tide has changed it is flooding and then we have the current with us and the right of way against any opposing traffic; the bad thing is that to get there we are bucking the ebbing tide all the way so the ship has to make more speed just to compensate for this push against us.

Thus all the way from Ketchikan it was peddle to the metal to make sure that we will make this tide but also to gain some plus speed in case we have to slow down for opposing traffic or traffic that happens to be in our way. Because Seymour Narrows is not the only hurdle on the way, although it is the biggest one, the one which dictates our schedule. 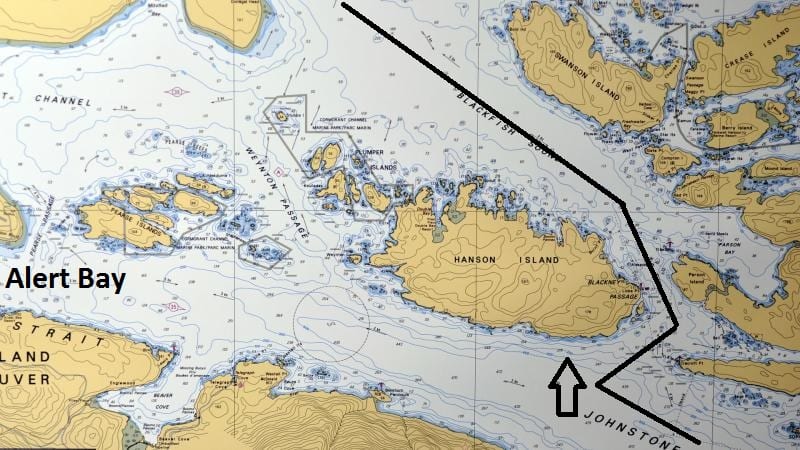 Blackney Passage. The arrow shows the direction of part of the current. The rest goes direct west. But once in  the passage that current first pushes you towards Hanson Island, then straight up and then to the other side.  If we have a very late tide, then we can sail past Alert Bay but that costs about 45 minutes of extra sailing time as it is a longer route and we have to slow down for a “no wake” area.

There is Blackney Passage which has the challenge of a 90o turn when coming through and the chance that the current catches you sideways and setting you towards the rocks. Next is Race Passage which is where Johnstone Strait (which is where we will sail the main part of our late afternoon and evening) splits up and curves around Helmcken Island. If there is no traffic then most ships take the south passage both ways as it is the most direct one. But if there is traffic then the island acts as a traffic divider and westbound traffic has to go north and southbound traffic has to south. We are southbound this time, so it is all in our favor if it was not for Race Rocks. This is a rocky outcrop or reef at the south east end of Helmcken Island. So you cannot sail in the middle but have to favor the south shore (and quite close) to stay clear before you can go back to the middle of Johnstone Strait. 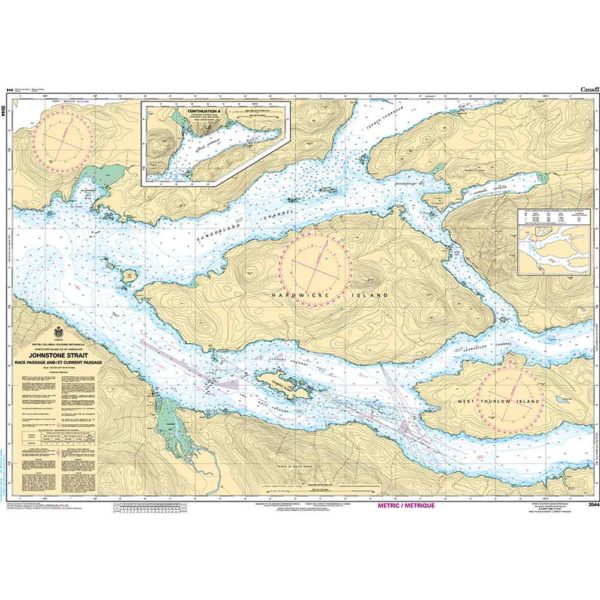 Both Blackney and Race Passage we can do at any tide as it never goes higher than 4 knots and apart from the rocks there are no challenges in large course changes. But you might have to slow down if there is traffic in the way. Plus at Blackney there is a fair chance of seeing Orca’s especially now the season is progressing. That means staying clear of them and also from the sightseeing boats buzzing around them. Although buzzing is the wrong word as they should stay at a respectful distance. That often means slowing down and on a tight schedule that is a challenge.

Hence the reason to keep up the speed during last night and this morning while being in the open waters of Queen Charlotte Sound. Most captains keep that speed up until they can “drop an engine” e.g. we have enough time in the plus that we can make it with an engine less. If the current proved to be stronger than suspected or more traffic in the way than expected, then we can always engage that engine again and work up a bit more plus.

And figuring that one out kept the navigators busy all day. Not being too early as that means floating for the last miles and burning unnecessary fuel and not being too late as then we will be late in Vancouver. And that is something that we cannot do as the Westerdam has to make sure that I am on time in Vancouver. This is the end of my period on board the ms Westerdam and after three ships, ZADM, PRDM and WEDM I am scheduled for a vacation. If all goes well, I will be back around October 5 with the blog and if the schedule does not change then our Flagship will be the first on the list.

I would like to thank all my readers for their interest and patience to keep up with my daily dose of information, reflections, musings, rumblings and tit bits that hopefully have been of interest and I hope you log in again nearer to date.  From ships focus my attention now has to go to home focus as I have to catch up with outstanding items on the –honey do – list. The ceiling in the 2nd bathroom is a year past target time for painting, so it cannot wait much longer. Plus the roof of our apartment building needs attention as well. And hopefully I can work a bit more on the history side of the blog, as there is a log of material waiting in the pipe line for uploading. I do not expect that I will be bored. And yes there also two cruises in the planning with the competition. Being Captain on the bridge is great fun, being captain in the bar is not that bad either so there goes the focus this time.   My car has been arranged for 09.30 in the morning and I should be home by  1500 hrs. local British time on the 28th. 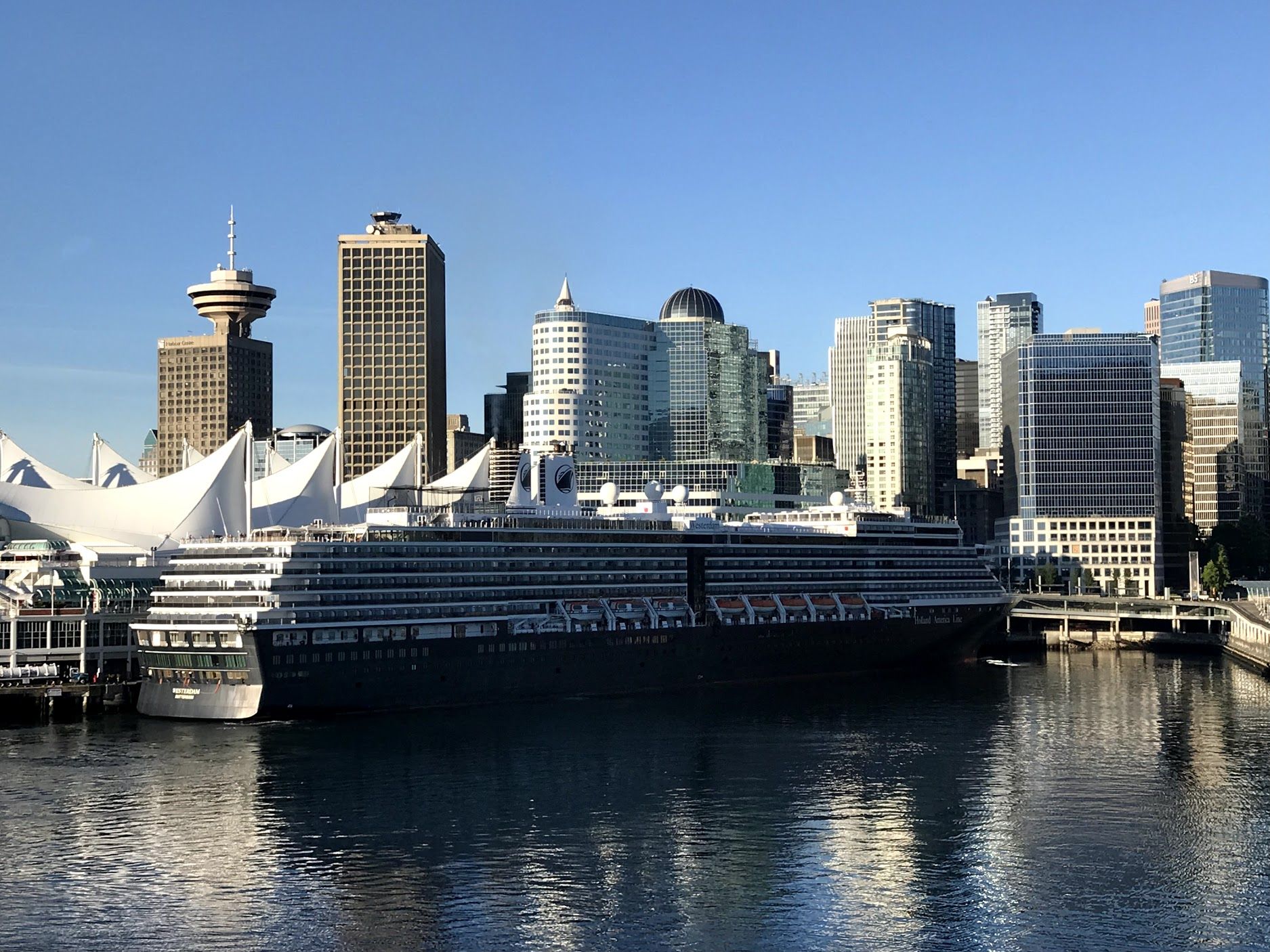 This is what I need to see. Tomorrow a sunny day in Vancouver (as forecast) and with the ms Westerdam happily and timely alongside.  (Thank you to a unknown German on the internet who posted this)